Analogue summing is proving a popular route for 'warming up' digital mixes, and there are many models on the market that are dedicated to the task. Here's a selection of current options, with links to the SOS review where available. 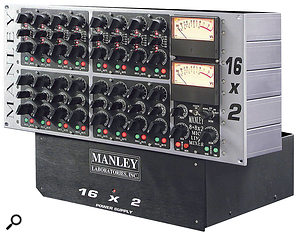 The Manley 16x2 is very expensive, but also of very high build and sound quality. Facilities include solo, mute, pan, level and aux‑send controls for each of its 16 channels, as well as direct outs and a monitor controller. The 16x2 can also be specified with eight line inputs and eight mic preamps, or with 16 mic preamps. Like the Fat Bustard, it uses valves to subtly add harmonic distortion.

The Egret is an 8-channel device that usefully incorporates an A‑D converter for each input channel, so you can use your computer's digital outputs (either AES3 or ADAT) for summing. Also on offer are a post‑fader aux send and 'colour' controls designed to add degrees of harmonic distortion to individual channels. Each channel has its own insert point.

The 16‑input 5059 offers pan and level controls, switchable insert points per channel, and a choice of two stereo mix buses, each of which has access to a stereo‑width control and Rupert Neve Designs' 'Silk' and 'Silk+' circuitry, which add subtle thickening distortions to input signals.

The Folcrom is one of the more basic summing mixers on the market, offering 16 inputs and two outputs, its only controls being for basic channel panning (far left, far right or centre of the mix). It's also a passive device, and needs its outputs to be amplified by a mic preamp to bring them up to a healthy signal level. Consequently, it doesn't require power.

This 16:2 mixer from the makers of the Transient Designer offers switchable insert points and direct outs for each channel, as well as a peak limiter on the master bus for increasing the loudness of your mixes. A switchable stereo expander, which uses a mid‑side matrix to increase the perceived stereo width of the mix, is also featured.

As its name suggests, the Satur8 is an eight‑channel device capable of adding a valve-like saturation to input signals. Each channel has a 'drive' control, so the inputs can be saturated independently of each other, and master‑bus insert points are provided. A stereo aux input allows multiple Satur8 mixers to be daisy-chained.

Another relatively simple device, the 2Bus can sum 16 channels (in eight left/right pairs), and has controls for adding 6dB of gain to each pair, or mono‑summing each pair before it hits the mix bus. Its only other control is a master‑level trim pot.

This 16‑channel design from the AMS Neve stable employs transformers at the inputs and outputs, which help give it a classy, 'warm' sound. It also has a subgroup bus, and can be augmented with the optional 8804 fader pack and a high‑quality A‑D converter card for digitising the final mix.

The eight‑channel PM8 is fairly basic in terms of features, its per‑channel controls comprising just a mute switch plus level and pan knobs. Unusually, though, it has both active and passive outputs. The passive outputs are designed to be amplified by an external mic preamp, while the two active pairs will operate at line level. One of these pairs is electronically balanced, for a fairly clean sound, while the other uses transformers, which add a 'vintage' character. 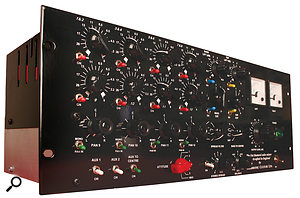 Like all Thermionic Culture gear, the Fat Bustard is a valve device designed to impart pleasing harmonic distortions. It's a 12‑channel mixer with channels 1-8 configured as stereo pairs, the rest being mono and equipped with pan knobs. A passive EQ across the main bus is available, as well as a stereo widener, a monitor‑control section and a variable‑distortion 'attitude' control.

Are you feeling that your digital mixes sound cold and lifeless? If so, it may be worth investing in an analogue summing mixer...

When you're working entirely 'in the box', as many of us do, the process called 'summing' — the adding together of various audio signals — is performed digitally. Essentially, this involves adding together the numbers representing each individual signal, to come up with the combined 'mix', and pretty much all modern DAWs are capable of doing this extremely well. However, some people believe that the summing process is performed either more accurately, or in a more sonically pleasing way, or both, in the analogue world: there, it is the continuous electrical signal fluctuations, rather than the digital signal values, that are combined at the mixing stage. 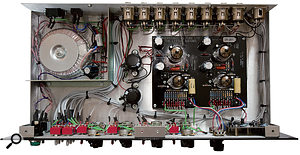 Generally speaking, summing mixers are intended to add analogue warmth to a mix. For this reason, many models use valves and transformers, which have the effect of adding harmonic distortion in much the same way as vintage consoles and tape machines do.This belief has led to a number of equipment manufacturers producing devices intended to allow users to continue to enjoy the convenience of their computer systems while reaping the potential benefits of analogue summing. These boxes vary enormously in functionality and complexity, however. The simplest summing mixers do no more than combine multiple analogue inputs into a single stereo output, with no ability to change the relative levels of each signal going in, while some of the more full-featured models approach the specification of a full‑blown analogue console, with buses, auxiliary sends and signal processing facilities built in.

If you're using one of the simpler types, you'll need to set your channel levels inside your computer. What's more, many of the more basic models don't have panning functionality (their channels are hard‑panned left and right in pairs), so you'll need to use your DAW's mixer to set channel panning too.

Summing mixers also vary greatly in terms of channel count, and it's quite likely that even one of the larger models will have fewer channels available for summing than a big multitrack project may contain, so some sources (multi-miked drum kits, for example) may still need to be submixed inside your computer before reaching the summing mixer.

More Than The Sum?

Analogue summing boxes have their uses beyond simply combining signals. Features like per‑channel and master‑bus insert points, for example, can be extremely useful, as they provide an easy way to incorporate outboard hardware (EQs, compressors and the like) into your rig.

As mentioned earlier, quite a few summing mixers actually have signal processing built in — most commonly, some kind of compressor designed to act on whole mixes, rather than individual tracks. Other features often incorporated include a monitor controller, an A‑D converter (for digitising the final mix), aux sends (for adding reverb or delay to individual channels), and a distortion or saturation control to add further analogue-style character.

As you can see, there's more to many analogue summing devices than simply the ability to mix signals together. Indeed, components such as valves and transformers, and the inclusion of compressors, can often have a greater effect on the sound than the summing process itself, so if it's analogue 'warmth' you're after, you may want to look out for precisely these features.

Before you take the plunge and invest what can be quite a bit of cash, however, it's vital to check that your studio can accommodate one of these devices. For starters, you'll need an audio interface with multiple outputs, in order to route several channels from your computer to the summing mixer simultaneously. You'll also need a spare pair of audio inputs so that you can record completed mixes back into your computer.

Finally, and importantly, you should have a clear idea of what results you can expect from such a device. If, like many people considering going down the analogue‑summing route, you feel that your computer‑based mixes could do with a bit of warming up, it's well worth making our February 2010 feature on analogue warmth a part of your research. You can find it on the SOS web site, at /sos/feb10/articles/analoguewarmth.htm.