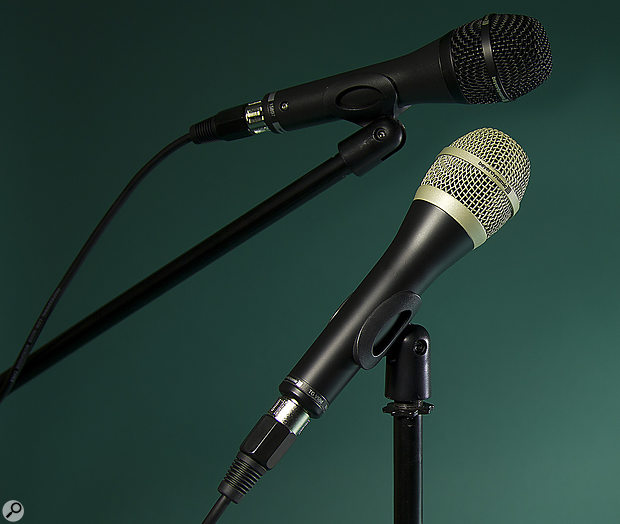 These classy new stage mics sit at opposite ends of the tonal spectrum — so if one doesn’t suit you, the other probably will.

While many people still gravitate towards the Shure SM58 for live performance, it is by no means the only game in town, and just as with studio mics, it is important to pick a model that suits your voice rather than simply relying on the spec sheet. These two moving-coil mics have noticeably different tonal characters, the first being the cardioid-pattern TG V50d. Constructionally the mic follows tradition in that the mesh basket can be unscrewed for cleaning. It has a removable, shaped acoustic foam lining. The matte silver basket is extremely rigid, affording good protection for the capsule, which sits atop a flexible suspension to reduce handling noise. At 389g, the TG V50d feels comparable in weight to most mainstream mics of its type.

With its tapered shape, the mic sits comfortably in the hand and a stand clip is included along with a zip-up soft storage case. Our review version had no switch, but a switched version, the TG V50dS, is also available. According to Beyerdynamic’s technical data sheet the mic is voiced to provide a full low end, but the capsule also includes a treble resonator to help pick out the detail. It covers a 50Hz to 17kHz frequency range and there’s a gentle presence hump at around 5kHz as well as a more pronounced peak around 10kHz.

At around twice the price and again available in both switched and unswitched versions, the TG V70d offers a tight hypercardioid polar pattern in an identical form factor and with the same accessories, though the grille is black on this model. The polar plot shows the rear lobe to be very pronounced — as is invariably the case for hypercardioid patterns — so it is important to aim monitors at the dead spot around 45 degrees off the rear axis rather than directly towards the rear of the mic.

This time the voicing combines with a stronger proximity effect, delivering what Beyerdynamic describe as a saturated bass characteristic to give support to less assertive voices. For the high end there’s a dual-stage treble resonator, and the overall frequency response is quoted as 80Hz to 18kHz. The sensitivity as 3.2mV/Pa. A broad presence boost peaks at around 7kHz and a more elaborate, progressively damped capsule suspension is fitted to minimise handling noise. Both of these TG-series microphones claim to use porting to make the off-axis response as frequency-independent as possible, and certainly the sound remains reasonably consistent at up to 45 degrees off-axis.

Sonically the cheaper TG V50d has the most conventional response, exhibiting a good balance between solidity of tone and detail. Its handling noise is low and its resistance to popping OK, so long as a low-cut filter is switched on at the desk end. There’s plenty of output from the mic so you don’t need a lot of preamp gain to get a healthy signal, and the presence peak helps it cut through.

Switching to the TG V70d reveals a noticeably bigger-sounding low end and a more pronounced proximity effect, just as the documentation suggests, which could be a bonus in propping up thinner-sounding voices or for keeping female voices sounding balanced. It is extremely smooth-sounding, adding a lot of weight to the chesty end of the vocal range, but again really needs to be fed into a preamp with a low-cut filter to control popping. Its tonality may not be the best fit for somebody with a soft-sounding voice, though a little EQ cut should redress the generous low end if required.

Both mics are well made and do what their manufacturers intended. I suspect the TG V70d may sound too bass/low-mid heavy for many pop and rock singers, whereas the TG V50d has a more familiar upper-mid focus that helps it cut through a noisy backing band. But then that’s the point of offering microphones that are differently voiced — you can pick the one that best suits your own vocal style and tonality.

Other than the obvious Shure SM58, pretty much every mic company offers a dynamic model: some cheaper, such as the Prodipe TT1, and others costing more, such as Telefunken’s M80. You’ll also find well-specified dynamic mics from companies including Rode, Audio-Technica, sE, MXL and so on — so the choice is huge.

Though not offering anything radically new, these two mics are designed to last and work well on a technical level.