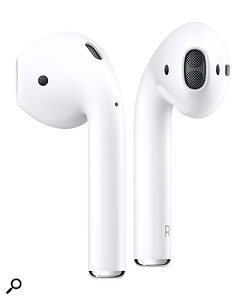 Over the last decade Apple have been shepherding us towards a wireless future. With the introduction of the MacBook Air in 2008, 2015’s MacBook, and the iPhone 7 jettisoning the headphone jack in 2016, it would be difficult not to take the cordless hint. Which brings us to Apple’s recent wireless product.

AirPods are essentially wireless versions of Apple’s wired EarPods. They come in a neat charging case, and if anyone was in any doubt as to what an Apple-designed lighter might look like, wonder no more. The case features a Lightning connector for charging and also a battery, enabling the AirPods to be refuelled even when the case isn’t plugged in. Apple say the AirPods are good for five hours of playback, with the case offering a charging capacity equivalent to 24 hours. And, best of all, three hours of playback is possible with just 15 minutes of charge time. My own experience demonstrated nothing to refute these claims.

If you’ve ever paired Bluetooth devices to a phone (or any device, to be honest), you’ll experience a frisson when pairing the AirPods to an iPhone. Just flip the lid on the case and, so long as Bluetooth is enabled on your iPhone, a panel will appear prompting you to connect to the AirPods. Tap the Connect button, and that’s it. A second panel displays the current battery life of both the AirPods and the case, which is also visible from the Batteries widget. After this, your iPhone will automatically connect, as will any other Apple device associated with the same iCloud account. 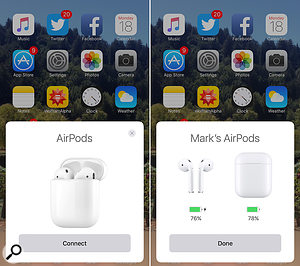 Setting up Bluetooth-based audio hardware has never been so easy.Sonically speaking, there was something pleasingly exaggerated about the AirPods. Not from a professional point of view, but in a manner that belied the relatively cheap cost for such a wireless product. The bass was pleasant enough and the high-end reasonably crisp.

I was curious how the AirPods would work with music apps on an iPhone or iPad, specifically in terms of latency, since their convenience would be ideal for playing around in a casual situation. Sadly (though predictably) when I launched GarageBand with the AirPods connected, an alert appeared explaining that “Using Bluetooth, you may notice a delay when playing Touch Instruments or when playing back your song.” And indeed, there was a delay of maybe 250ms when triggering an instrument, which is sort of inevitable to achieve a reliable audio stream over Bluetooth. Although this could be tolerable if you’re working with apps where a real-time response isn’t essential, such as a step sequencer.

Aside from the AirPods being great wireless earbuds for casual use, the real eye opener is the user experience. If only all Bluetooth-equipped music and audio hardware worked so well in the mobile world.