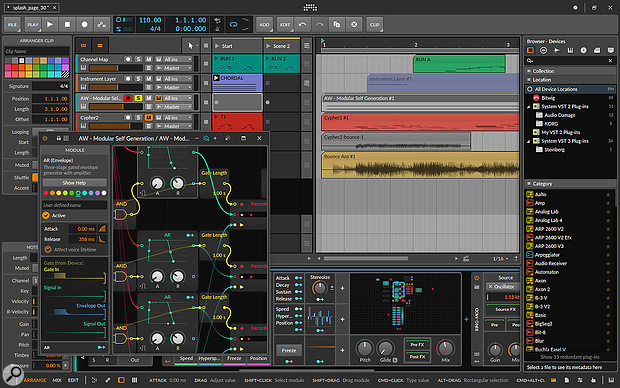 Ever since Bitwig Studio launched some five years ago, the company have been talking about a "modular audio system" underlying the whole design, and how one day that might get exposed to the user community at large. Bitwig Studio 2 made some first steps in the modular direction, allowing any instrument or effect to be enhanced with its own collection of modulator objects: LFOs, step sequencers, vector mixers, envelope followers and so on. With Studio 3 we're finally being shown the complete picture, with fully modular instruments and effects as first-class citizens, and it's called The Grid.

On-screen modular environments aren't new: they go back at least a couple of decades to products like the Nord Modular. These days modularity is a major feature of products ranging from Cycling '74's Max and Native Instruments' Reaktor to Propellerhead's Reason, as well as a fair number of software modular plug-ins. Roughly speaking, Studio 3's Grid falls somewhere between the integrated environment of Reason and the editable-devices approach of Ableton's Max for Live.

Like Max for Live, Bitwig's modular environment is revealed through a small selection of dedicated device types: Poly Grid is a polyphonic instrument that responds to MIDI and outputs stereo audio, while FX Grid is a stereo-in, stereo-out audio processor. (There's no facility in The Grid for direct MIDI processing, and hence no equivalent of the Max for Live MIDI Device.) Select one of the two Grid device types, drop it into a track, and you're away. These are first-class devices, with remote-control macro knobs, modulator slots, and even dedicated nested chains for other effects. In place of the usual panel of controls there's a miniature grid of squares, some of them filled with coloured blocks. This grid can be thought of as a 'satellite view' of modular components: click the appropriate icon for an expanded view, or click in the grid area itself, and the device pops up, full sized and fully detailed, into the main panel area. (The expanded view panel can also be popped out into its own dedicated window.)

With the arrival of The Grid in Studio 3, Bitwig have knocked the ball out of the park.

What you see in this panel depends on the type of Grid device you select: for the Poly Grid the default is the world's simplest synthesizer made from an oscillator and an envelope, while for the FX Grid it's just a through connection from input to output. These are the starting points: you can build on what's there, or remove everything and start from scratch. The entire configuration of any modular device is saved with the Bitwig project, just like any other device. It's not a separate file as in Max for Live, unless you choose to export it to your library, and there's no notion of preset switching for a device: the entire device, modules and all, is the preset. 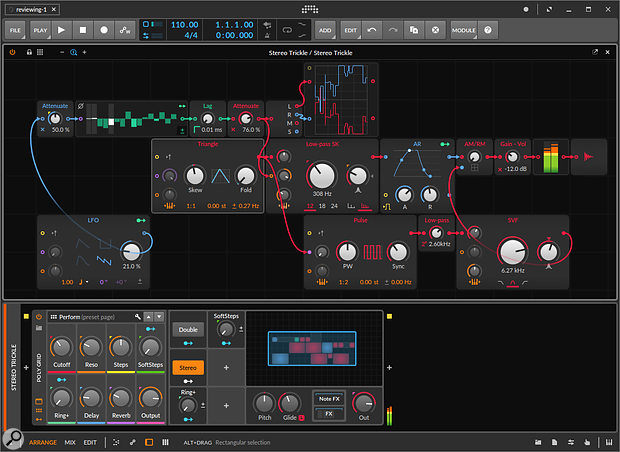 The Grid in full, with miniature overview and full editing pane.

Modular devices are constructed from a selection of approximately 150 modules, laid out strictly on a fixed grid and wired up with virtual patch cords. The simplest modules occupy one grid square and are reminiscent of Scrabble tiles, while more complex modules occupy larger rectangular areas. Some modules, such as the step sequencers, are resizeable. There's no nesting or grouping of modules, but the editing grid appears to be unbounded in all directions, so there's no hard limit on the complexity of device you can build, and the view can be zoomed to help with navigation. As you patch, the miniature view of the module layout updates in the device panel.

Modules have patching inlets on their left and outlets on their right, so the natural signal flow is left-to-right, although there's nothing stopping you patching from right to left or vertically if you don't mind the disorganisation that results. For some device designs that's going to be unavoidable, but patch cords turn translucent when not selected, so the visual clutter is minimised.

Working with modules in The Grid is so similar to all the other modular environments out there that's it's hardly worthy of explanation. Modules are selected by dragging from a palette at the top of the panel and patched together by dragging from a module outlet to inlet, or vice versa. An outlet can connect to several inlets, but not the other way round. You can cut, copy and paste modules individually or as selected groups. And if you drop a module on top of a similar module, the new one replaces the old and adopts whichever parameter values they might have in common.

The available modules are arranged into 16 groups: Oscillator, Filter, Envelope, Math and so on. Some modules seem to be filed slightly arbitrarily (the step sequencers are found under Data, for example, while Sample/Hold is under Level but the Sample/Hold LFO is under Random). I was pleasantly surprised to find Bitwig's new Sampler instrument (of which more later) available as a dedicated module, for those times when you absolutely need a multisampled grand piano in the middle of your modular patch (or more realistically, you want some wavetable action). Sampler zones can be selected based on a modulation input, as can playback mode and playback 'head' freeze, and, as in Sampler proper, the three multi-zone parameters are available as modulation sources, so that switching between samples (by key pitch or velocity, say) can alter the processing in the rest of the device. 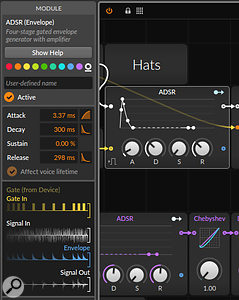 A Grid module's inspector pane, showing parameters and input and output signals.Every module has an inspector pane for setting parameters that aren't part of the module's main panel, such as envelope segment shapes — and, subtly but importantly, sometimes parameters that are exclusively in this pane are valid modulation destinations. There are also handy scrolling scope displays showing input and output signals. The entire modular device also has an inspector pane where you set things like polyphony, voice allocation, retriggering and the timing of bar-and-beat phase inputs. (As an aside, the FX Grid device for audio processing can also run in polyphonic mode, responding to note events, allowing for various layering effects.) This inspector pane has a Show Help button, which pops up a massively useful help window explaining all of the module's controls. This isn't just a passive piece of documentation: the module illustrated in this window is 'live', so you can continue to make edits with the documentation right in front of you.

Everything in The Grid's world is continuous–signal-based, just as in hardware, and not like Max for Live which encompasses discrete messages as well as audio. Hence, no MIDI messages appear in The Grid: there's implicit conversion to (virtual) CV and gate. (If you want do some kind of MIDI processing on the input, the Poly Grid device has a dedicated nested chain for Note FX, and any note-processing devices here can be modulated by the Grid device.)

A couple of aspects of The Grid's signal processing are a little unusual. Firstly, as the name suggests, the Poly Grid device is polyphonic (and the FX Grid has polyphony as an option): you can set the voice count, note triggering and stealing modes, and can stack voices for a unison effect. (Stacked voice modulation is available as in Bitwig's other devices.) Secondly, all signal processing is 4x oversampled and conducted in stereo, including control, gate and phase signals. Stereo makes perfect sense for actual audio in a DAW environment, but it caused me a little bit of head-scratching when I discovered that LFOs have a phase control that separates the left and right output, and the oscillators can be stereo-detuned. In fact, the entire signal path runs in stereo right up until any point where a single signal is needed (for example, as a general-purpose modulation output), at which stage the left and right parts are merged together. Similarly, signals from polyphonic voicing are averaged together where a single value is required. Rather confusingly, some visual display modules, such as the oscilloscope, show the averaged signal rather than the individual voices or left/right channels.

Patch cords, as well as module inputs and outputs, are colour-coded by function: yellow for logic, orange for pitch, purple for phase, while red and blue are referred to as 'untyped', which in most cases means audio. But the colouring is advisory rather than mandatory, and there are no rules against mixing and matching signals of different colours: everything is audio-rate and stereo. In fact, you can even change colours arbitrarily.

Not everything needs to be patched: some modules like the oscillators and envelope generators have 'pre-cord' features which connect their control inputs invisibly to incoming note pitches and gates, without the clutter of more patch cords. (Pre-cord signals for pitch also take pitch-bend gestures into account.) In the filters, the pitch pre-cord connection is variable, for control over the amount of keyboard follow.