Widely touted as Boss's response to UA's popular OX, the Tube Amp Expander actually offers a contrasting approach. Will one of them be a clear winner?

When the Boss division of Roland announced their Waza Craft Tube Amp Expander (let's call it the TAE) at Winter NAMM 2019, many people saw it as a direct challenger to Universal Audio's OX tube-amp load box and speaker simulator. And in some ways, it is: it undoubtedly targets a similar user and fundamentally seeks to address the same issues arising out of the use of tube guitar amps, both on stage and in the studio.

At the same time, however, it's a very different solution, based on some fundamentally different design choices. Where the OX uses a dummy load with a single, fixed impedance curve, the TAE has a choice of 16, able to be derived from its Resonance and Presence switches. Where the OX uses dynamically modelled speaker simulation, the TAE exclusively employs speaker impulse responses (IRs). Whilst the OX's footswitch facility is, "as yet", almost entirely unimplemented, the TAE has a comprehensive footswitch option available from day one. Where the OX's software editor requires a wireless connection, the TAE's app connects via USB. Finally, and perhaps most significantly, whilst the OX offers an attenuated speaker output, the TAE feeds its post-load signal to an integral solid-state power amp to derive a speaker-level output. Anyone still thinking they are "basically the same"?

Physically, the TAE is a 2U black box, slightly narrower than the normal 19-inch format, but rackmountable nonetheless via the included adaptor rack ears. The reactive load that receives the speaker output of your tube amp is switchable between 4, 8 and 16 Ω settings, with a three-position power-matching switch offering a choice of 10, 50 and 100 Watts, for internal level optimisation. Maximum power input is spec'ed at 150 Watts, and there is a 16Ω 'safety load' in place if you forget to power up the TAE before switching on a connected amp.

If you were just using the TAE to get a big tube amp into its sweet spot at a lower volume, you'd plug your amp's speaker output into the TAE and then take your actual speaker signal from one of the two speaker outputs, using the front-panel Speaker Out knob to give you a continuously variable level control from nothing to everything, and all points in between. So far, so simple, but we are not done yet...

There are two reactive load controls on the front panel — Resonance Z and Presence Z — that between them can be used to modify the impedance curve of the load presented to the amplifier's output transformer. We tend to think of speakers purely in terms of their nominal impedance — usually 4, 8 or 16 Ω in the guitar world — but the actual impedance will vary significantly across the whole frequency range of the speaker, with a big peak at the bottom, around the resonant frequency of the unit, somewhere between about 55 and 95 Hz, followed by a slow rise through the average value, with a gentle tip-up at the end. The resulting impedance curve is fundamental to the way cone drivers are made and it's not surprising, therefore, that all guitar speakers exhibit a similar basic shape in their free-field impedance plots. There are differences between designs, however, and even more differences when the effects of different enclosures are also factored in. The impedance curve that the output stage of the amplifier 'sees' affects the power transfer (along with the phase angle, but let's not go there) at different frequencies and, in conjunction with the basic frequency response of the speaker, determines how the speaker, cabinet and amp combination will actually sound.

Early designs of dummy load for tube amps were usually purely resistive, which means their impedance did not vary with frequency like a real speaker. Players often reported needing to make significant changes to their amps' tone-control settings to try to compensate, and also that they made the guitar feel 'stiff' and less responsive under the fingers. The 'reactive' dummy load — ie. a load exhibiting an impedance curve — was developed to present a more speaker-like load to the output stages of amps, and what we have here in the TAE is a further development of that in the form of a 'tunable' reactive load that allows you to approximate the impedance curve of a number of different speakers and enclosure types. 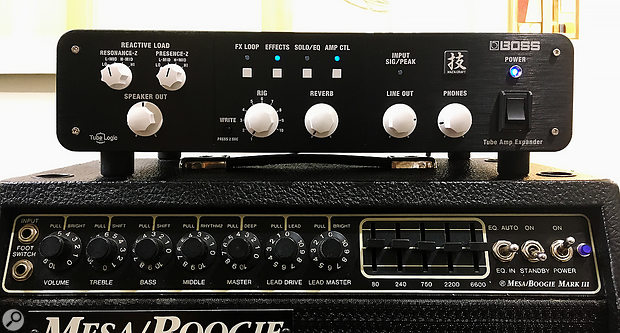 With the tube output stage driving the dummy load, the speaker is fed from the TAE’s own power amp.

The Resonance Z control tweaks the bottom end of the impedance curve where the speaker's resonant frequency lies, while Presence Z shapes the top, with both four-position switches simply labelled Lo, L-Mid, H-Mid, Hi. For anyone not sure how to set these, there's a helpful matrix printed on the top panel of the TAE (and in the documentation, of course) that gives a recommended combination for 10 popular cabinet types.

These aren't EQ controls, although they will appear to function as subtle ones, but rather the means to make the connected amplifier behave as if it is driving not just 'a speaker' but a specific speaker or cabinet. The logical goal therefore is to match the settings to either the physical speaker that you've connected to the on-board power-amp output, or the virtual speaker whose IR you are using via the line output. What happens when you 'mismatch' the impedance curve setting ranges from the very subtle to 'something's not quite right'. To put this into some perspective, however, you can just set Resonance to L-Mid and Presence to H-Mid, or vice versa, and the majority of internal cabs and decent cab IRs will sound OK with some EQ tweaking. It's only when you want to make something quite specific sound as 'real' as possible, such as emulating a thunderous 'Dual Recto into a deep 4x12' perhaps, that absolutely optimising the impedance curve setting becomes crucial. 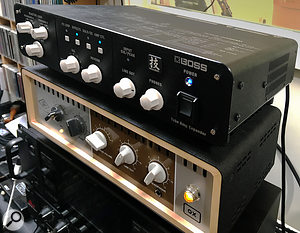 The TAE (top) was compared with the Universal Audio OX — each has its relative strengths that will likely hold appeal for different players.The OX's single, fixed impedance curve is somewhat akin to leaving the TAE's reactive load controls set on L-Mid and H-Mid, and perhaps explains why some people feel there are a few amps that don't quite seem to give of their best with it using their normal settings. But the OX uses a dynamic modelling process for its speaker simulation, rather than the fixed transfer characteristic of IRs, and given that the load is a constant, the modelling can seek to create an appropriate response for whatever virtual cabinet type is selected. TAE users browsing through cab libraries should ideally remember to check the impedance curve setting for each significantly different type to be sure they are hearing it at its best. On the plus side, however, with the right settings, they will know that they have an optimised impedance curve and that their amp should definitely be performing very similarly to how it would with a real speaker/cab of the selected type.

The TAE's attenuator is always at full attenuation because there is no 'speaker through' signal being used to drive a real speaker. This contrasts with the OX's stepped attenuation of the amp's output. With a varying amount of the 'real speaker' load involved as well, maintaining consistent tonality across all the steps of an attenuator is a real technical challenge, and most systems that attempt this usually invoke some form of compensating EQ for the lower output settings. The tonality of the TAE's attenuated signal will be constant, regardless of where the integral power amp's output is set, and this configuration also has the benefit of allowing you to make a low-powered amp louder, perhaps allowing you to use a favourite studio amp on stage — a hundred Watts of Fender Champ, anyone? The power amp is described as Class–A/B Tube Logic, which is Roland/Boss's flagship analogue solid-state emulation of a tube amp, and features thermal protection and fan cooling when needed.

The Boss TAE, just like the OX, also facilitates direct recording, with no real speaker involved at all. In this configuration, the signal derived from the dummy load passes through an A-D converter and feeds the integral impulse-response host, where you can access both the integral cabinet IRs and any that you may have added to the library yourself. These are managed via the TAE's Mac- and Windows-compatible software app over a USB 2.0 connection. Don't expect Universal Audio-style photo-realistic graphics: the TAE's editor is... let's agree to call it 'functional'. It's not an efficient interface, in my view, but you can get at everything you need, and on the plus side, it didn't crash once, or drop its Wi-Fi connection, because it doesn't require one. 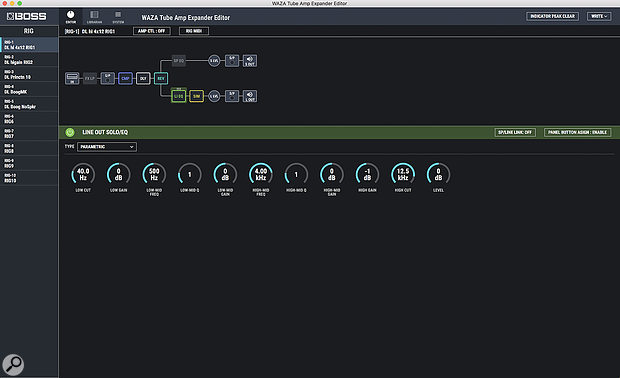 Though it’s effective enough in a utilitarian sense, the software editor’s designers haven’t really made the most of the GUI’s screen real estate.

The editor allows you to store your own 'Rigs' — whole setups of routing, IR, EQ and effects — with 10 of these being able to reside within the TAE hardware for instant recall via the front-panel control or footswitch. Apart from the Speaker Out level and reactive load settings, the only other control knobs on the front are the Rig selector, Reverb, Line Out and Headphones. The reverb control is always live and can therefore override whatever has been recalled within a Rig. Also recalled within a Rig are the status of the back-panel analogue effects loop, the Solo/EQ parameter and 'Amp Control' setting — the latter being an external amp-channel switching system that can be set to operate as simple contact closure or electronic switching.

What's not recalled is the reactive-load setting — understandably, as it is on hardware rotary switches — so, whilst you can footswitch from a 4x12 IR on your 'big solo' sound, to a 1x12 combo speaker IR for your cleans, one or the other of them won't necessarily have an optimised impedance-curve setting. Of course, you can change the settings manually, which is perhaps worth doing for a whole song but not so much for flipping from verse to chorus and back again. It makes sense, therefore, to set up your on-stage Rigs with the impedance curve that suits the sound you use most and then compensate for any significantly different IRs that you'll be using with a bit of EQ. Having the exact impedance curve of a particular speaker or cab seems to matter only in a few very specific instances, and any combination of the middle settings will get you to the point where the other variables — virtual miking, the room, the guitar, and you as a player — are making more of a difference to the final output.