If you’re a fan of early 1970s guitar tones, this pedal might be one you’ll enjoy. Handmade by BLAMMO! Electronics, of Portland, Oregon, it’s a revamp of the classic Colorsound Power Boost pedal. Originally designed in the late 1960s by Gary Hurst, the Power Boost was one of the first overdrive pedals to market and it quickly found its way on to the pedalboards of many guitarists, including David Gilmour and Jeff Beck. Essentially it’s a simple preamp pedal with a two‑band EQ, but although it’s a simple circuit, it gives the user many tonal options.

The Voltage Booster does a great job of updating a classic pedal design so it meets the needs of modern players.

This new pedal stays true to the original Power Booster’s circuit design, and uses original BC184L transistors, but BLAMMO! have also implemented several new quality‑of‑life features for the modern player. A relay‑based true bypass switching system has been added, to allow around three times more usage cycles as well as silent switching. The power filtering has also been updated, and protection against damage from the connection of incorrect power supplies has been installed, so you don’t accidentally fry the pedal! 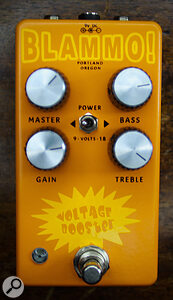 The most notable addition is the switchable 9V and 18V power rail voltages (the voltage change is handled internally, and you only ever need to hook it up to a standard 9V external supply). Why two settings? Well, the first Power Boosters ran at 18V but later revisions used 9V and, naturally, fans of the pedal have personal preferences. The 18V setting, with its higher headroom, generally sounds a lot more modern than 9V, and it delivers a longer note decay too. The 9V setting, on the other hand, sounds somewhat more compressed and vintage, feeling a lot ‘warmer’. Which one is nicer is obviously a question of taste and intention, but it’s worth noting that I generally found it more pleasant to run other pedals into the Voltage Booster when on its 18V setting; it sounds particularly good after a gnarly overdrive or a Russian‑voiced fuzz.

The pedal features a classic two‑band Baxandall EQ, which I found very useful while demoing this pedal on my board. I could shape my tone from a murky riff through to a present and biting lead just by using the two‑knob EQ — it’s all very quick and easy. It’s also useful for ‘cleaning up’ your tone if you’re running it after a couple of other pedals.

You will find a Master Volume control on the Voltage Booster, another of those quality‑of‑life features that was often implemented as a DIY modification to the original, since it was extremely loud! The practical upshot, of course, is that you can now drive the gain right up and turn the volume down, so as not to deafen yourself or overload the next stage in the chain. But it’s not just about the sound of the pedal itself — the levels that can issue forth from this pedal make it great for pushing the input of a valve amp, with the Master Volume control allowing you to tame things as much or as little as you want.

The final change is the form factor. The original Power Booster was a large pedal, and while vintage units may be in demand, they’re not exactly economical for a travelling musician with limited pedalboard space! The new Voltage Booster’s PCB is smaller, so it can fit into a standard 125B enclosure, which is much more pedalboard friendly. The enclosure is finished in a matte orange, which is faithful to the original but I suppose the bright colouring may not be everyone’s cup of tea!

In summary, the Voltage Booster does a great job of updating a classic pedal design so it meets the needs of modern players, and the switchable voltage modes effectively mean that you have two, differently voiced, versions of the Power Boost to choose from.