When I opened the box and first saw the Blue Encore 300 capacitor mic, I thought there was something very familiar about the shape... then realised that the last time I was in Seattle, I climbed up something very similar to view the city! Designed as a hand‑held live vocal mic, this mic has a cardioid pickup pattern, and seems very robustly engineered. Its smaller‑than‑typical wire basket is surrounded by the mic equivalent of a roll bar. Another unusual feature is the ridged lower body, designed to give performers a firmer grip. There's also a custom‑designed phantom power circuit, which lights the mic's logo when in use — cute! A soft‑grip mic clip and storage pouch are included. 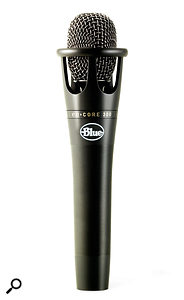 Blue say that the design features a hand‑tuned Aria condenser capsule, optimised for vocal use, with a wide 35Hz‑20kHz frequency range and maximum SPL of 140dB. The capsule's diaphragm is around half an inch in diamter, and sits in a resilient shock mount. The 12mV/Pa sensitivity is comparable with other stage mics.

With a price tag around twice that of the market‑leading dynamic vocal mic, the Encore 300 needs to offer something a little special, so how does it sound? To find out, I took it into the studio to compare it with a few other mics, to try to ascertain its true character. On vocals, the sound was very similar to some of my large-diaphragm mics, with a solid low end complemented by nice open highs. The presence peak is high enough to permit airiness without harshness, but at the same time there's good vocal definition. I'd certainly be happy to use this mic in the studio as well as live — but then it does cost as much as some studio mics! It does, however, provide a reasonable resistance to popping and has low handling noise, so it would be good choice for making live recordings, and of course for live performance — so if you tend to work across the studio and live divide but demand studio-quality audio, the Encore 300 is a very attractive proposition.  Paul White