Blue are well known in the studio microphone field but they’re now also making significant inroads into the headphone market. Their Lola model, reviewed here, is built around custom 50mm, fibre-reinforced, moving-coil drivers, and the company also offer the Mo-Fi, which is essentially an active version of the same design, with built-in ‘audiophile’ stereo amplifiers. Blue claim that a fully charged Mo-Fi will run for around 12 hours. 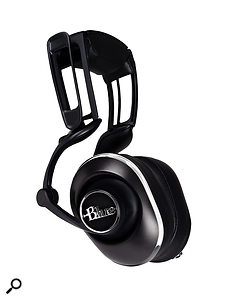 Right from opening the box, you can see that the Lolas are solidly built and extremely stylish ‘phones, with an impressively engineered, sprung, multi-jointed headband, apparently inspired by racing-car suspension design. A soft storage bag is included. There’s generous padding on top of the headband and deep padded oval ear cups that sit over rather than on the ears, forming a very effective seal. The closed-back design is intended to minimise sound leakage. There’s no need for adjustment because the headband moves to accommodate all head sizes, and the whole apparatus fits very snuggly. Although I was conscious that the ‘phones felt a little tighter over the ears and, at 397g, heavier than the studio ‘phones I normally use, they’re still quite comfortable to wear for extended periods. Connection is via a removable three-metre, 3.5mm jack cable, and an additional cable with integral level and mute buttons is included for those using smartphones, tablets or MP3 players. A quarter-inch jack adaptor is also included.

With an impedance of 42Ω, the phones boast a 15Hz to 20kHz frequency response and I can confirm that they can produce more SPL than you’ll ever need. Sonically the Lolas have a smooth, natural sound that conveys detail in a non-fatiguing way. The lows extend all the way down but without seeming overblown, as they can be in some closed designs. Listening to familiar songs often reveals fine detail that you simply don’t notice on loudspeakers, which is why good headphones are essential for checking mixes, especially in rooms that have dubious acoustic qualities. There’s also a sense of solidarity and focus when listening to music, with a wonderful sense of stereo width.

While the asking price isn’t trivial, good headphones cost money, and I think it’s actually very reasonable given the build quality and sound quality. I have to say that I’ve come to really like the Lolas, and while I’d normally choose open-backed phones for mixing, I’d have no qualms about using on these. Being closed-back headphones, they provide great isolation and can play loudly without losing clarity, so they double up rather nicely for tracking duties. They’re definitely worth checking out if you get the chance.