In a sample library world that seems to be dominated by collections built on construction kit-based loops or playable instruments built with a Kontakt (or other) front-end, it’s becoming a bit unusual to find a product that is presented simply as a collection of WAV files. However, that’s what Boom Library are providing in their Cinematic Horror title. In fact, the library features three options: construction kit, designed and ‘bundle’ (both of the previous versions). I looked at the bundle version and, in total, there are some 16GB of sample materials, all presented in 96kHz/24-bit WAV format and spread across approximately 370 individual files. 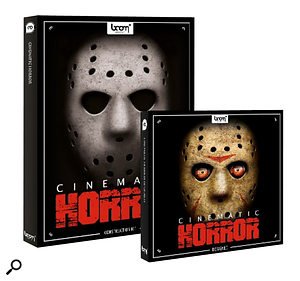 Not too many prizes for guessing the nature of the content here, and the ‘horror’ title is spot on, although do note that the material is perhaps aimed more at those interested in sound design than more traditional musical scoring. I also think the ‘cinematic’ bit is very fair: these are big sounds, full of character and, given the 96kHz format, sonically they are more than up to the mark for even the most demanding of audio applications.

Given the nature of the content, I’m not sure the ‘construction kit’ label is quite so apt though. This part of the bundle is split into five sub-folders, and while each contains distinct content, the WAVs are perhaps not a ‘construction kit’ in the more conventional use of the term. OK, so I’m sure you could layer two or more of the various drones (for example), but candidates for such combinations can just as easily be picked from any of the sub-folders. That’s not to say there are not some great sounds here though, there are, and the drones and ambient beds — which dominate the content — are particularly good. What’s more, many of these run for in excess of two minutes; if you are scoring an extended scene, you will have plenty of material to work with for each of the individual sounds.

The distinction between the construction kit and ‘designed’ materials is that, while the former offer raw, unprocessed sounds (perfectly usable but ready for your own processing preferences), the latter have been subjected to some processing and are bigger and bolder because of it. There are some fabulous ‘hits’ amongst this section of the library that really can get your speaker cones shaking; in a theatre with a decent sound system, this stuff could certainly shake your audience also.

Other highlights across the library include some really unsettling laughs and screams plus a number of distorted drones. This is genuinely scary stuff and, while there is perhaps nothing drastically new in terms of the style of the material, the quality is most certainly up to snuff. OK, so this isn’t the cheapest collection of ‘horror’ sounds you could buy, but I can imagine lots of horror and sci-fi composers and/or sound designers having a blast with Cinematic Horror’s high-quality content.