Apparently, 2016 was the year international sport descended on sunny Brazil, with a corresponding demand for TV composers to spice up their pitches with choice Latin rhythms. One collection I’d have loved six months ago is Rio Grooves by Cinesamples. Its carnival-like atmosphere is a testament to award-winning producers Victor Pozas and Roberto Schilling — and the talents of top local musicians. It consists of loops from 17 instruments played both collectively and individually in over a dozen styles. Each performance has been captured with three microphone positions, ranging from clean and intimate (perfect for adding extra treatments) to a lively, natural room ambience. 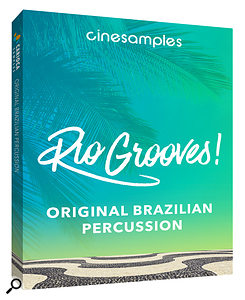 If you’re daunted by the prospect of scoring for Brazilian percussion, you’ll be glad to learn each of the 20 supplied Kontakt patches contains more than just a series of loops to be triggered in what you hope are credible combinations. Bundled in the package too are MIDI files you can drag onto your DAW’s arrange window, laying out a basic structure before you play a note.

The graphical interface is simple and pleasantly educational. I mean, it’s easy enough to differentiate an atabaque (hand drum) from an agogo (double bell) but I, for one, appreciated the assistance in separating a ganza (shaker) from a xequere (shaker gourd). The patches are arranged into three categories: Instrument Groove, Song Form and Simple-to-Complex, with the original tempo of each indicated. You’re free to disregard this and trust Kontakt to keep the sync sweet, although the further you stray the more obvious are the effects of time-stretching.

Song Form patches contain intros, breaks, main sections, fills and endings in ensemble and individual performances. These are colour-coded and spread across the available notes, with the breaks and endings particularly helpful for lending believability to commercial tracks. Alone amongst the patches, Songs contain individual hits, which I initially thought I’d find a use for. However, this view was soon shown to be naüve because, no matter how I tried to add a splash of manual repinque (two-headed tom) or caixa (a light, fast snare), all I achieved was a demonstration of my own rhythmic inadequacies. Be in no doubt: it’s the feel and syncopation of the performers that make this collection what it is.

Naturally, a couple of sambas are included, along with an additional preset ‘Escola de Samba Extras’ containing some rollicking agogo (dual bells), apito (whistle) and cuica (someone kicking a dog). The Simple to Complex category does exactly what you’d expect and its simplest patterns are sure to be the easiest to put into general use. Although complex performances are often more difficult to place, they’re highly effective when used sparingly.

Rio Grooves occupies a little over 1GB and is an infectious blend of authentic instruments and human feel. None of the performances are overcooked, making them a delight to blend with other loops, arrange as is or cherry-pick from to breathe life wherever it’s needed.