Whether you’re on a budget or have cash to splash, Audio-Technica’s new range of IEMs has something for you.

Audio-Technica’s IEM series of in-ear headphones comprises three models, which cover a wide price range and feature some interesting transducer technology. The ATH E40, E50 and E70 (pictured in ascending order) are aimed at a broad market, and will be of interest to professional musicians looking for live stage monitoring, as well as people who want a high-quality listening experience from their media players. All three offer very good isolation, and are robustly constructed using detachable cables that incorporate a mouldable over-ear section for a secure fit. 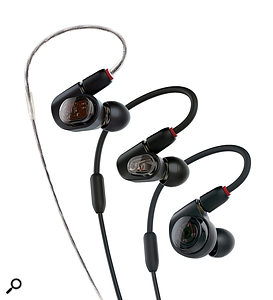 The most affordable model is the E40, which uses a twin-driver push-pull design, where two virtually identical drivers are mounted facing each other, fed in opposite polarity, and thus each driver assists the other during every diaphragm movement, resulting in increased efficiency, faster attack and a more linear, controlled response. The housing on the E40 is somewhat larger and more rounded than the other models, although the cable arrangement, connectors and earbud components seem to be all the same. On the back there’s a clear panel that allows some of the inner workings to be seen — some very tidy soldering is apparent here — and I think the design is both unusual and extremely neat.

Moving on to the more expensive E50, there is a marked difference in design both externally and internally. On the outside, the body shape is slimmer but still retains the little see-through panel exposing a bit of internal circuitry; the over-ear mouldable cable is the same and the output port that fits in the ear looks to have the same design and therefore hosts the same silicone eartips as the other models.

Internally, the E50 (and the E70, but more about that in a moment) is very different from the E40, and the twin-driver design makes way for a single balanced-armature (BA) motor. In brief terms, a balanced-armature driver doesn’t use a traditional circular diaphragm to produce direct pressure variations, but incorporates a moving armature sitting in a sort of tiny rectangular enclosure, where the magnetic field is generated by a set of stationary coils; the armature is connected to a moving plate in an adjacent chamber acoustically coupled to a carefully tuned output port. Balanced-armature drivers are smaller, lighter and generally more efficient (because the coils are fixed they can be higher mass and generate a stronger field) than moving-coil drivers, and this is of course a significant advantage in designing miniature components. As these balanced-armature drivers are so small, it’s possible to use more than one even in the tiny space associated with in-ears, and the most advanced (and most expensive) model in the range, the E70, uses three drivers, each operating within a specific frequency band.

As with all transducers (microphones, speakers and headphones), the question of personal taste and preference plays a big part in determining who will like what brand and model, and the reasons for choosing Brand A over Brand B will depend on many factors. I was mainly interested in how the three variants compared to each other, and I decided to start with the one in the middle: the E50.

On opening the box, I found that the in-ears are supplied with four sets of silicone eartips, not as spares but in different sizes. It may seem obvious to say that it’s important to use the correct fit, but if earphones are only supplied with one stock set of tips, then anyone with the wrong ears will be compromising on performance from the start. Using the optimum size of eartip results in consistent balance, especially in the lower frequencies, a good secure fit that should keep the things in place during energetic performances, and of course listener comfort. I tried all the sizes before — surprisingly — finding that the largest size was the one that worked best for me. I spent some time fiddling around with the cable, and forming the mouldable part around the top and down behind my ears, but when it was finally done I was able to remove them easily and put them on again without having to re-form the cable shape. After about 10 minutes I had arrived at a very comfortable place in terms of fit and sound balance, and I spent a good couple of hours listening to a range of recorded music covering as many different basic genres as possible. I repeated the whole process with the E40 and E70 versions, and I then got a local singer-songwriter who happened to be rehearsing in the studio to try them all out as well.

First off, all three models sounded very good. They all have a nice wide frequency response, and they are all pretty efficient and handle ‘loud’ very well. The one thing I feared was that they would all sound pretty much the same and I’d have to write at length about the differences in shape or weight... However the E40, E50 and E70 do not sound the same and each is likely to appeal to potential users in different ways. The E40 is the entry-level model in the range, being by far the most affordable; it produced a well-balanced and pleasing sound with plenty of bass, and nice crisp highs which personally I would want to tone down slightly for my taste. Everything was present in detail, and the isolation (with the correct size eartips) was impressive. I fed the E40s from various sources including my live monitor rack, the studio foldback amp, and some portable devices including an iPod and a phone. When used with the live rig and studio amps they demonstrated an ability to get very loud without getting all blurred and smeary in the top end, and whilst the bass is strong at low levels it didn’t get all flabby when I turned it up. A good point about these in-ears is that because their push-pull motor is so efficient they will produce a more than respectable listening level from an iPod, which doesn’t have the most powerful headphone amp on the block.

And so on to the E50 model, which uses a single balanced armature and a slimmer, more elongated housing. I was expecting these to sound somehow ‘better’ but I wasn’t expecting them to sound so much better in every respect! The bass was lovely and tight, the top end was just as clear and bright, but the vocals and general mid-range were much more forward, with a remarkable degree of clarity and warmth. I particularly noticed a change in balance between the vocals and piano chords in the first verse of an old ‘70s disco classic ‘Rock The Boat’ — the E40s gave me more piano above the male vocal, whereas the E50s put the vocal in front with nice rich backing from the piano; others may hear it differently but that’s what jumped out at me. The E50 headphones gave me exactly the balance I have always heard from all of this music listening on decent speakers in a decent room, or listening live — and I did include orchestral (and even Black Dyke Mills Band) material in my own listening test.

The difference I found when switching to the E70 in-ears was of a different kind. They exhibited the same warmth, balance and superb clarity, but there was an additional dimension to the sound, with more detail apparent, especially listening to ambient recorded sounds such as reverb tails from both studio-generated sources and real-world spaces — fabulous atmosphere on RoseWynde’s ‘Countess Cathleen’ for example. Listening with the E70s was about the closest thing I’ve experienced to being there in the room with the performers, provided that I adjusted the volume to match what I’d expect from a live performance. Whether the extra detail provided by the triple-BA design is something that can be fully appreciated in the monitor mix on a live stage probably depends on the material being performed, but both the E50s and E70s provide a very ‘real’ live quality, which is so important when using in-ear monitors that have good isolation. A design as good as this might even discourage some artists from removing one of the earpieces so that they can ‘hear the stage’ (and then complaining that there’s no bass in the foldback...).

The feel-good factor of the IEM Series is further enhanced by the quality of the accessories, including a great little zipper case which has ample space to hold the earphones and the spare eartips. The silicone eartips themselves are very effective, and the generous range of sizes supplied should accommodate most humans and elves. The E70s also come with a set of ‘Comply’ closed-cell foam eartips, which I found best of all — they give excellent isolation, comfort and ‘sticking power’; they mould easily to fit the outer ear, and have a slightly tacky finish that reminded me of the glaze you get on a hot cross bun, kind of tacky but not sticky if get my meaning. I’ve certainly never come across anything better. The E70 has a slightly more flexible cable which resists kinking, and all three versions benefit from the detachable cables because the joint can swivel and so allow precise alignment of the earpieces, eliminating cable strain into the bargain.

I asked the aforementioned singer to try the IEM Series in the studio, monitoring his vocals and guitar whilst I played a backing track over the live-room monitors at a hefty level. The verdict on the E40s was ‘very good’, and on the E50s and E70s it was unfortunately unprintable, but wholly positive — very much in line with my opinion.

You have to try these out. I like the E40 headphones, they perform very nicely, are sturdy and well made, and the replaceable cables and swappable eartips are very attractive features. I love the E50s and would happily wear them all day long or offer them up to a high-paying artist either live or in the studio. And if I’d had a good month, I’d spend the extra on some of the E70s just because they’re the best.

Most of the established headphone brands, including Shure, Sennheiser, AKG and others, make in-ear monitors across a range of prices.