This head–turning new mic from Blue helps you reach the places other mics can’t.

Blue mics are nothing if not visually distinctive, and their new Hummingbird model, leaked to only a select few during the 2014 NAMM show, is no exception. One year on and the Hummingbird is shipping. Based on the existing Blue Bottle’s B1 cardioid capacitor capsule, and teamed with a discrete solid–state preamp, the mic’s most distinguishing physical feature is its 180–degree pivoting head, allowing plenty of flexibility when placing it in awkward situations. Certainly this topography should make it handy for sneaking beneath and around cymbals. 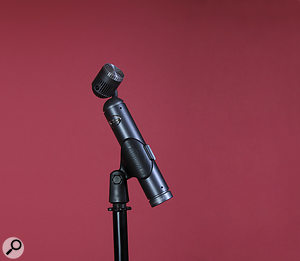 The Hummingbird is physically compact, with a cylindrical body made predominantly from steel and with a metallic grey coating designed to handle the knocks of live sound as well as studio work. The tilting head, which is the same diameter as the body, is only around 36mm long and 27mm across, and the capsule looks to take up most of the internal width. With the capsule looking straight ahead, the mic measures 170mm in length, and has the expected XLR balanced output at the end of the body. Standard 48V phantom power is required for operation.

Blue’s literature claims an ultra–fast transient response and SPL handling up to 130dB, while the included mini manual suggests that the Hummingbird works well with most common acoustic instruments, from piano and acoustic guitar to drum overheads. However, it can also be used for main or backing vocals, and its tight manufacturing tolerance (±2dB response) makes it well suited for use in stereo pairs. Blue sent us a pair to try out, and the manual helpfully included some useful descriptions of suggested mic placements for various instruments.

As shipped, the mic comes in a sturdy, semi–rigid zip–up carry case complete with moulded foam inserts to hold the mic, the included stand clip and a foam wind shield. However, its technical spec gives very little clue as to how it might actually sound — it boasts the expected 20Hz to 20kHz frequency response, a typical sensitivity of 15mV/Pa at 1kHz, and a dynamic range of 129.5dB. A very respectable EIN noise figure of 8.5dB (A–weighted) is quoted while a smoothed response graph shows modest presence humps set at around 3.5kHz and 10kHz, but these account for only two or three dB of boost at those frequencies. At the low end, there’s a fixed gentle roll–off below 100Hz, rather than a switchable low–cut filter, and there’s no pad switch.

Tested with an acoustic guitar while using the swivel head to audition various mic placement options confirmed Blue’s claim that the microphone is able to capture transient detail with a high degree of clarity. The sound might best be described as lively and open, without the lower-mid congestion that some mics suffer from, though moving away to the point that the proximity effect no longer holds sway reduces the deep low end below what you’d typically expect from a flat–response mic. This is to be expected given the fixed LF roll–off, and in most applications it shouldn’t be an issue — indeed, this is often just what you need to keep things sounding clean in a mix, but where more depth is appropriate, you can add just a hint of EQ to regain the right overall tonal balance. It is worth stressing too that, although the highs are clear and well–defined, they come over as reasonably smooth-sounding, while the mids have a musical warmth to them that doesn’t detract from the sense of clarity.

The ability to swivel the head really comes into its own when trying to find the sweet spot for an instrument, as you can try a number of variations before having to move the mic or stand. This ability to fit the mic into awkward spaces is particularly useful when working over drums within a kit, while my hand–percussion test recordings using a Turkish darbuka drum once again confirmed the capable transient handling. The darbuka is a useful instrument for mic tests as it has a decent depth of tone yet quite a lot of complexity courtesy of its metal shell. All those little rings and pings you get from playing what are effectively rim shots with fingers come over really well.

As with guitar then, the darbuka sound comes across as articulate and nuanced, though at a distance of 300mm or so, the deep lows were noticeably more restrained than from the Sennheiser MKH40 I set up alongside for comparison.

In tight spots around a drum kit, positioning the mic body horizontally and then angling the head down towards the drum solves a lot of accessibility problems, especially if working on toms, where the cymbals are often close above. However, the lack of a pad switch worries me a little in close snare- and tom-miking situations where the drummer is particularly heavy–handed — I’d feel more confident if the maximum SPL handling could have been switched to something in excess of 140dB. It’s not an issue when using a pair of these mics as drum overheads, of course, as the distance is much greater.

There’s no problem using the Hummingbird as a vocal mic, as long as you hang a pop shield in front of it, and the proximity effect can be exploited to control the amount of added warmth. As ever with solo vocals, it really comes down to whether or not the mic suits the particular voice you are trying to record. In solo vocal applications the subjective end result invariably trumps the spec sheet, though using a pair to record a choir or vocal ensemble in stereo should be a fairly safe bet.

Summing up, the Hummingbird performs well for a mid–priced pencil–style mic, with the added bonus of its swivelling head. It stacks up well against similarly priced mics, but as you’d expect, it doesn’t manage quite the same sense of refinement or precise focus that a really high–end small-diaphragm mic delivers. What I can say is that you get a solidly built mic capable of perfectly accomplished results in a range of applications.

While there are plenty of mid-priced pencil mics from which to choose, including the popular Rode NT5 and NT55, none that I know of feature swivel heads.

A capable mid–priced pencil-format instrument mic with the added benefit of a swivelling head.