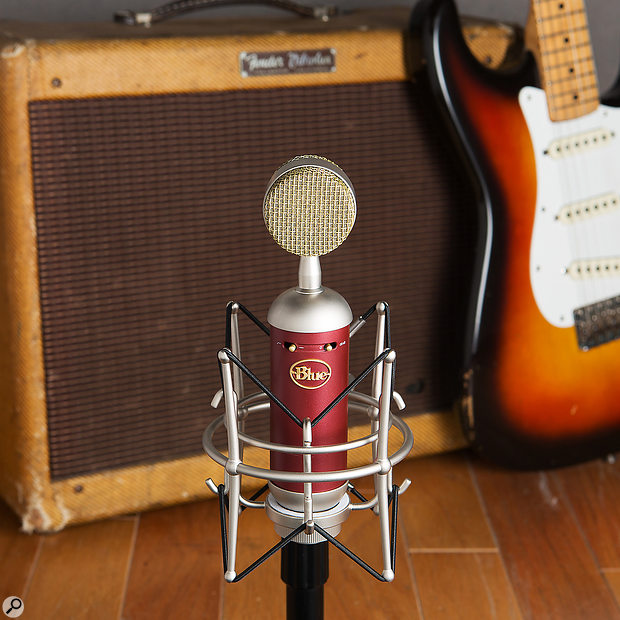 Blue Microphones were kind enough to let us have advance samples of three new cardioid-pattern capacitor microphones, due to be officially launched during the 2017 NAMM show and which should be on sale around the time you read this. All three mics are designed in the US and built in China to maintain competitive pricing, and all have the distinctive styling we’ve come to expect from Blue.

The model names may already be familiar, being part of Blue’s Essential Series, but all three mics have been re-engineered and updated to include pad and filter switches, among other refinements. The protruding switches make it impossible to disassemble the mics by simply unscrewing the retaining ring at the bottom of the body sleeve, but removing the ring reveals enough to confirm that the circuit board construction is to a high standard. All come with a two-year warranty and are supplied in a neat wooden case with a sliding lid, and the packaging also includes a wire-frame, elasticated shockmount. A Blue logo denotes the ‘hot’ side of each mic.

With a projected price of $199£184.99, the Spark SL is the latest incarnation of Blue’s entry-level Spark model. It offers a great deal to the budget-conscious home-studio operator, and for a surprisingly low cost. Style-wise, the Spark SL follows the familiar ‘basket on a bottle’ format (200 x 47.5 mm overall) and employs a cardioid-pattern capsule feeding into solid-state, Class-A JFET circuitry based on discrete components. Constructionally the mic looks very solid and sophisticated with its muted red paintwork, chunky satin metal parts and robust barrel-shaped grille section. The capsule has a 20mm-diameter gold-sputtered diaphragm and is edge terminated.

Blue promote the Spark SL as an all-rounder, so as well as vocals it can handle pretty much any acoustic instrument including drums, guitar and pianos. The handbooks for all three mics include some useful tips on recording voice and various instruments. Small toggle switches activate the low-cut filter (100Hz, 12dB per octave) and 20dB pad, though the dual voicing of the previous (non-SL) version has been omitted.

Requiring 48 Volt phantom power to run, the mic has a frequency response of 20Hz to 20kHz and a sensitivity of 34.9mV/Pa at 1kHz (1Pa = 94dB SPL). It can tolerate SPLs of up to 136dB before reaching 0.5 percent distortion, and has a self-noise of 16.4dB A-weighted (IEC 651), which though not as low as for the other two mics, is still a healthy figure. The response plot shows a nominally flat response up to 5kHz or so, after which there’s a very gentle rise topping out at around 10kHz before falling back, creating a subtle presence hump. This bodes well for an airy top end, but without aggravating upper mid-range harshness.

Slightly larger than the Spark SL, at 222 x 51.5 mm, and sporting a blue livery, the Bluebird SL follows a similar physical format, though the basket has a flat front and a rounded rear, unlike that of the Spark SL, which is flat on both sides. The switchable low-cut filter (100Hz, 12dB per octave) and switchable 20dB pad are again on recessed toggle switches. Its edge-terminated 27.6mm diaphragm is made from six-micron-thick gold-sputtered mylar. According to the manual, the Bluebird SL was designed to flatter and add warmth while also having a detailed high end, and that seems to be borne out in practice. As with the Spark SL, it can be used for vocals and for a whole range of acoustic instruments that include sax and strings, as well as the more obvious acoustic guitars, pianos and drums. It costs a little more than the Spark SL at $299.99£299.99 but is still very attractively priced for what is on offer.

Again requiring 48 Volt phantom power to run, the mic has a frequency response of 20Hz to 20kHz and a sensitivity of 28.5mV/Pa at 1kHz. It can tolerate SPLs of up to 138dB before reaching 0.5 percent distortion, and has a self-noise of 11.7dBA, which is sensibly low. As with the Spark SL, the response plot shows a nominally flat response up to 5kHz or so, after which there’s a gentle rise peaking at around 10kHz before falling back. However, the cardioid pickup patterns is just a little tighter than that of the Spark SL. 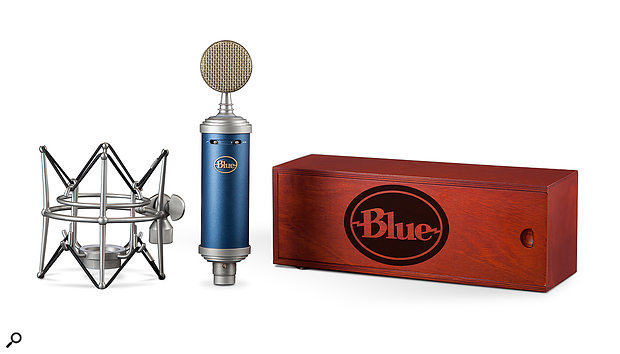 All microphones in the range (the Bluebird SL is pictured) come with a wooden case and elastic shockmount.

Again based on a slight variation of Blue’s distinctive basket-on-a-stick format, but this time finished in black metallic paint, the Baby Bottle SL is described as a cardioid mic though the printed polar patterns looks more like a hypercardioid, offering a tight pickup pattern. This model, which is the most costly of the three, with a recommended price of $399£359.99, doesn’t feature the presence hump of the previous two microphones — indeed it could be said that the response is nominally flat. Examination of the polar plot shows that, as with all hypercardioid microphones, there’s a significant rear lobe, so the least sensitive angle is around 60 degrees off the rear axis, rather than directly behind the mic as it would be for a standard cardioid model. The design aim appears to have been to capture the character of classic microphones, to which end the Baby Bottle SL is intended to flatter and warm the sound source rather than to capture it in a clinical way, while keeping the highs sounding smooth.

Again we find Class-A, discrete electronics with no transformers in the signal path. The same low-cut and pad toggle switches as for the previous two mics are in evidence, though the basket design is a little different, being domed on both sides. The capsule has a 26.6mm edge-terminated, gold-sputtered diaphragm.

On a technical level the mic is just a hint quieter than the Bluebird SL, with a self-noise figure of 10.8dB, while its SPL handling (before switching in the pad) is 134dB. It is also more sensitive than the other mics, at a hair below 40mV/Pa, and has the same overall dimensions as the Bluebird SL.

Blue recommend the mic for voice, pretty much all acoustic instruments and also electric guitar cabinets, electric organs and even bass guitar cabinets. If miking a speaker cab close to the speaker grille, the proximity effect props up the low-end response down to around 40Hz, below which it drops away fairly steeply. Used further from the sound source the roll-off is more gentle and starts at around 90Hz. 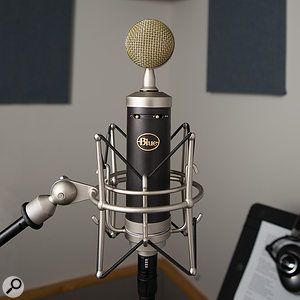 The Baby Bottle SL is distinguished from the other microphones in the range by its hypercardioid polar pattern and flatter frequency response.All three mics produced a well-balanced sound on vocals, albeit with some expected differences in overall character. They were also a few dB more sensitive than the other mics I used for comparison purposes, so you don’t need quite so much preamp gain. The cheapest mic in the series, the Spark SL, has a slightly more mid-focussed sound than the other two mics, but not in an excessive way. By comparison it was less middly than an Audio-Technica AT2020, but more so than an Aston Origin. Don’t read too much into that though, as choosing a mic to suit a particular voice really comes down to finding out which model works for you, regardless of its paper specifications. The character of this mic helps vocals push through a mix while still maintaining a natural feel.

The Bluebird SL exhibited a slightly more expansive sound than the Spark SL, and it too adds a nice gloss to the highs, though having a presence hump makes both models slightly more prone to capturing sibilance than the flatter Baby Bottle SL. The Bluebird SL has a subjectively natural overall tonal balance, where the transparent highs are matched by warm lows. In most cases this should capture a very comfortable vocal sound that needs little EQ to fine-tune it.

With its flatter response, the Baby Bottle SL has a generally warmer sound with smooth highs and full lows. It is noticeably less prone to sibilance problems than the previous two mics, though some vocalists may need a little ‘air’ EQ adding to open up the sound, if warm and silky isn’t what they are after. If you crave that big, warm ‘classic’ sound but without the expense of valves or transformers, this model has a lot going for it.

Switching to acoustic guitar, all three mics produced a very workable sound. The cheaper Spark SL delivered the most lively character and, quite predictably, the Baby Bottle SL was the warmest. As always, finding the sweet spot for the mic position is half the battle, and all three mics respond well to a little EQ if needed.

On my electric guitar combo, with the mics around 600mm from the grilles, all three mics produced perfectly usable results, though the Bluebird SL added a little more magical shimmer than the others and was my favourite in this application. The Baby Bottle SL produced the smoothest sound, while the Spark SL, though acquitting itself well, didn’t add quite the same sense of fullness to the tone. Given that capacitor mics can often struggle when recording guitar amps, all three did remarkably well, and keeping a little distance between the cab and the mics, rather than putting the mics right up against the grille cloth, seemed to help keep things sounding sweet.

Finally, using the mics as drum overheads also revealed the tonal differences between the models, with the Baby Bottle SL adding a satisfying sense of warmth and depth to the toms but perhaps needing a little help from EQ to lift out the cymbals and snare. The Bluebird SL’s presence hump gave it more of a detailed sound and the same is true for the Spark SL, which actually kept pace nicely with the Bluebird SL, handling both the cymbals and toms in a well-balanced way while also adding definition to the snare.

Overall I found myself leaning towards the Bluebird SL as being the mic most likely to give me a good sound, regardless of the source, as it has a great balance between warm lows and airy highs. If buying one primarily as a vocal mic for yourself, then try all three alongside some of the competition if you can, as that’s really the only way you can tell which mic works best with your own voice. This seems particularly important for female singers as their higher registers can uncover tonal ‘nasties’ in some microphones whereas other mics may actually flatter their voice. Sometimes the mic with the least impressive spec produces the best subjective sound. Overall though, it seems that Blue’s description of these three mics as all-rounders is perfectly valid — and all three models are sensibly priced as well as looking fabulous!

This price range is very well populated, with competing models coming from the likes of Audio-Technica, Aston, sE, Rode, MXL, Sontronics, Roswell and several others.