Could API's latest 500‑series module be an essential purchase for Lunchbox users? 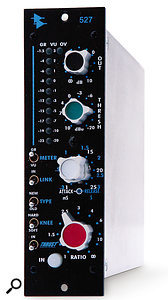 Automated Processes Inc (API) have a long and impressive history, dating back to the introduction of their first mixing console in 1968. A key feature of that desk's circuitry was the 2520 discrete amplifier module, which served as a standard 'building block' in its signal path, and that module is still employed in API's current products, including the 527 compressor‑limiter under review here. As the model number implies, the 527 is one of the company's Series‑500 modules, designed for use within the API 'Lunchbox' modular system, alongside classic siblings such as the 512C mic preamp and 550 EQ.

The 527 is a VCA‑based device and occupies a single Lunchbox slot. It's instantly recognisable as an API processor, thanks to its classic styling of a black‑painted faceplate with blue control legends, and the distinctive aluminium pointer‑knobs with brightly coloured cap inserts. The control layout is clean and simple, with five miniature toggle switches in a column on the left‑hand side, and four rotary controls on the right. A 10‑LED bar‑graph meter is switchable to show gain reduction or output level, and an illuminated push-button at the bottom of the panel activates a hard bypass. Audio connections are courtesy of the Lunchbox frame, of course, and comprise a pair of XLRs for line-level in and out. There's no provision for external side‑chain access, although adjacent modules can be linked for stereo operation if the appropriate solder link is in place on the Lunchbox back‑plane motherboard.

The large red rotary control at the bottom of the module sets the compression ratio from 1:1 to infinity:1, with additional markings for 1.5, 2.5, 3, 4, 6, and 10. All the rotary controls are continuous potentiometers, but with a fairly heavy detent effect, which gives the impression of a switching action. The next rotary control is a white capped dual‑concentric to adjust Attack and Release times, the attack settings being determined by the lower control against a scale marked in white, and release by the upper control against a scale in blue. The attack time constants range from one to 25ms, with additional positions indicated for five, 15, and 20 ms, while the release panel marks provide 0.3, 0.5, 1, 1.5, 2, 2.5 and 3 seconds. A minimum release time constant of 300ms is unusually long: most units will go down to 100ms or even faster, although in my experience 250‑300ms is the fastest usable release time for most compression duties.

Continuing up the control strip, the next rotary control has a blue‑green cap and adjusts the threshold across the range from +10 to ‑20dBu, (with markings for +7, 4, 0, ‑3, and ‑6dBu), while the topmost control (with a black cap) is an output attenuator. This spans an unusually wide range from minus infinity (fully faded out) to +10dB, and the unity‑gain position is marked. This really is an output-level control rather than the more commonly found 'gain make‑up' control: the VCA system employed in the API 527 is designed to maintain a constant output level regardless of the threshold and ratio settings.

The LED bar‑graph meter is supplemented by an overload LED (set for +27dBu) and two separate scales. To the right is a conventional VU scale, with +3dB at the top and ‑20dB at the bottom, and all the usual increments in between, while to the left is a gain‑reduction scale starting at ‑1.5dB and proceeding with +4, ‑6, ‑8, ‑10, ‑12, ‑15, ‑17 and ‑19, to end at ‑23dB. The toggle switch directly below the metering selects whether gain reduction or output level is being displayed. The gain‑reduction display mode is rather unusual: all the LEDs on means that no gain reduction is being applied, and the column falls back as more gain reduction is applied (most gain‑reduction meters illuminate progressively downwards from the top).

The second toggle switch activates a linking system, which couples the side‑chains of multiple units via a dedicated link‑bus in the Lunchbox chassis motherboard (this user‑selected option is not enabled by default). This enables pairs of 527s to be used for stereo applications, although any number of 527s could be hooked up to a common link‑bus. Care must be taken to match the settings on both (all) units, however, as although the linking facility shares a common side‑chain control voltage between all linked units' VCAs, the contribution to that shared control voltage from each unit will depend on the precise settings for Threshold, Ratio, Attack, Release, Knee, Type and Thrust on each unit.

The purpose of the third toggle may not be immediately obvious, unless you're familiar with the API 2500 Stereo Bus compressor or 225L console module, both of which include the same feature. Labelled simply 'Type', and with options of Old and New, this switch configures the VCA side‑chain circuitry for either feed‑forward (new) or feed‑back (old) operation.

The feed‑back configuration derives the side‑chain control signal from the output of the API 527, an arrangement that's fairly typical of most vintage optical compressors (amongst other designs). By contrast, the feed‑forward mode works by configuring the side chain to analyse — yes, you've guessed it — the input signal, and uses that to determine the required amount of gain reduction. This is commonly used in modern VCA‑style compressors, many of which also employ average (RMS) rather than peak level detection. Essentially the feed‑back mode is reactive, whereas the feed‑forward mode is predictive, and each has different dynamic characteristics — which API allow the user to experiment with, so they can choose the option best suited to the task in hand.

The next toggle switch offers hard or soft 'knee' options, the latter providing a nice, gentle, transparent transition into compression, while the former provides a much clearer delineation, and is better suited to limiting and more assertive special effects. The last toggle switch has a somewhat ambiguous function. Labelled Thrust, this controls a patented API feature that applies a high‑pass filter (roughly 3dB/octave below 1kHz) to the side‑chain and is intended to reduce the unit's sensitivity to high‑energy, low‑frequency signals. When switched on, this Thrust facility helps to maintain a powerful bass end while still controlling the overall dynamics when the mid-range and HF energy requires it. The final control is an illuminated push‑button, which activates a relay‑based hard-bypass function.

The 527 module is constructed very solidly, in the typical style for a Lunchbox module. A main circuit card carries the bulk of components, with smaller daughterboards to support some of the front‑panel controls and ancillary electronics. The whole assembly is neatly shielded within a steel case. API's 2520 discrete op‑amp modules are evident as input and output drivers (the latter via a fairly chunky output transformer), and a 2510 discrete gain stage is also employed as part of the VCA circuitry.

The 527 is very similar in sound, technology and functionality to the API 225L console module (the core compressor module in the revered API Legacy Plus console). However, the 527 expands on that technology by borrowing the feed‑forward/feed-back side‑chain options and Thrust function from the API 2500 rackmount stereo compressor.

Anyone familiar with the 225L will feel right at home with the 527, while also enjoying the bonus additions of the Thrust function and the ability to adjust the output level. On the other hand, anyone more familiar with the Lunchbox 525 compressor module will wonder what's hit them, because the 527 is a radically different kind of compressor. Fundamentally, the 525 is a fairly standard peak‑detecting feed-back design, whereas the 527 uses RMS detection and can be configured for either feed-back or feed‑forward operation, providing an entirely different sonic flavour. For me, the controls of the 527 are actually far more familiar and intuitive than those of the 525, although the same kind of constant output‑level operation is maintained, which makes life much easier when you're trying to dial in a specific sound character.

Like most API equipment, the underlying sound character of the 527 is very clean, fast and neutral, and the overriding impression is of a punchy, bright, clear and musical sound. It doesn't go soggy, even at extreme settings: the top end remains clear, bright and crisp, while the bottom end retains power and definition, particularly when the Thrust function is employed and heavy compression is being used.

The range of the attack control is well judged, and allows precise control of transients in high-ratio settings, but can allow those transients straight through unchecked, adding emphasis, edge and attack on percussive sources. The release-time control allows fast, punchy and pumpy effects at one extreme, through to gentle, transparent, smooth level control at the other. The ability to switch from a hard knee transition to the much more subtle soft knee adds to the variety of sound characters on offer, too.

Although the panel layout initially requires some careful squinting, I quickly found myself using the 527 without the need to continually check the control settings. Operation soon becomes intuitive and 'sounds' are found quite easily. The controls all feel smooth and solid to use and the metering is very informative. The Thrust side‑chain high‑pass filter is extremely effective in preventing the low end of a source or mix from dominating the amount of compression, particularly with percussive instruments such as strummed rhythm guitar and drum submixes.

Essentially, my impression is that the 527 excels at providing effective level control, while delivering a fast, bright and musically punchy character. It works superbly for bringing out the edge and body of kick drums, tightening up and adding depth to electric basses, emphasising and adding clarity to vocals, and generally taming programme dynamics without crushing the high end or losing the sense of air, which many compressors tend to do. The 527 is everything that people naturally associate with the API brand, and I loved it. Shame I only had one to play with for the review — a pair would probably be an essential first purchase for anyone investing in a Series‑500 Lunchbox system.

The entire gamut of Lunchbox modules could be listed here, as there are numerous compressor modules with various sound characters and facilities, but the feature set and sound of the API 527 is unique.

The API 527 will form one of the foundation modules of any Series‑500 Lunchbox system. Surprisingly flexible for such a compact device, it provides considerable tonal variations, spanning a large proportion of the audio dynamics palette, but all painted with clear, bright, punchy colours.