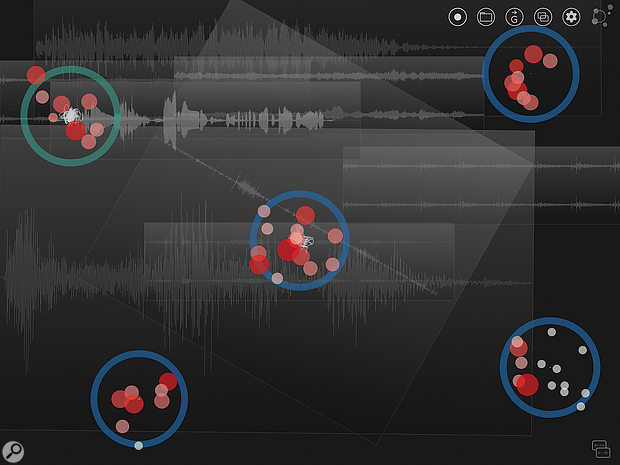 Multiple audio files can be mixed and positioned on screen ready for clouds to drift over them and work their magic.

Borderlands is a granular synthesis app in which audio is laid out so that animated clouds can float over it, grabbing and playing tiny portions of sound. What makes this slant on granular such an attention-grabber is the Minority Report-style gestures that are used throughout. In no time at all you’ll be intuitively positioning and resizing audio, moving clouds, dictating the actions of gravity and digging into each cloud to initiate deeper levels of sonic animation. The end result is a stunning and completely addictive app that just keeps on giving. Since there’s no manual yet, I recommend watching the tutorial video that also serves as a seductive advert. Once you have the basics, there’s no looking back.

While several audio files are supplied, original sounds are a much more exciting proposition. These can be recorded directly using the built-in microphone, or imported using iTunes file-sharing or from the Audioshare app if you have it. It’s probably easiest to start with a single audio file, creating your first cloud by double-tapping anywhere on-screen. Once this is positioned over the audio, a number of grains — those small chunks of sound — begin to play. By double-tapping the cloud you enter edit mode in which its parameters are accessed as easily as dragging small circles around.

This is when the fun begins in earnest. For a start you can determine the number of voices — from one to 32 — then experiment with the icons along the top of the screen to hear their effect on the way the grains are played. You’re given control over the amount of travel permitted from the cloud’s nucleus, as well as the grains’ envelopes, the direction of playback and whether any stereo image in the source should be preserved, to name just a few options. By touching the small ‘H’ icon, your cloud gains a resonant multi-mode filter, which appears as a new circle joining attributes such as grain pitch, duration, overlap, volume and so on. The values of all these are set by their position relative to the cloud, with the largest values furthest away. Even better, the dragging motions can be captured by clicking the record icon.

You can capture looping segments of the output (up to 30 seconds long) and place these loops amongst the audio files already present. If you like, you can produce named recordings ready to share with other apps, although if you get carried away with this, it can soon start to fill up your iPad’s storage. To keep track of everything, you’ll need to dig into the fairly inscrutable file menu where a list of the mixes you’ve made are stored, along with imported sounds and all the various scenes. A scene is a saved and named arrangement of as many audio files and clouds as you like, ready for future retrieval. 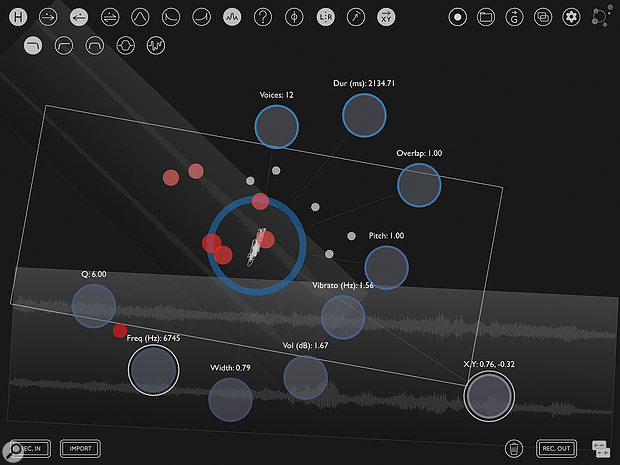 The MV51 clearly takes its style cues from Shure’s classic Model 51, but replaces that mic’s impedance selector with a modern control panel.

If, while editing a cloud, you double-tap elsewhere on the screen, a duplicate springs into life. Other than the RAM capacity of the iPad, there doesn’t seem to be a limit to the number of clouds and audio files you can place on-screen, which can lead to some mind-bendingly complex and strange results. I mentioned that the cloud’s internal parameters can be animated, but there’s more... The motion of each cloud over the audio landscape is recordable, its playback speed adjustable later if necessary. Alternatively, clouds can be subjected to gravity (unless they’ve been given exemption) and you can direct their motion using the iPad’s accelerometer.

Borderlands Granular produces some truly amazing sounds and is, without a doubt, the most fun I’ve had on an iPad in a very long time. Within a few hours it was firmly in my list of favourite apps, where I expect it to remain. I’m struggling to think of any negatives worthy of mention; the only one that occurs is really Apple’s fault. As I imported yet more copies of my favourite samples, I was reminded that the iOS file system sucks and made to feel quite naüve for ever believing a 32GB iPad Air would be sufficient for my needs! Audiobus support is included so you can pipe the output into effects processors such as Flux-FX, on the off-chance it isn’t crazy enough already. For anyone who enjoys unusual textures, off-the-scale weirdness or any flavour of abstract experimentation, Borderlands is surely a ‘must have’.