I have fond memories of fuzz pedals, as the quest to build a working fuzz box for my friends back in the mid ’60s is what got me into electronics and, subsequently, guitar playing. Today, ‘fuzz’ seems to mean slightly different things to different people, but for me the edgy rasp heard on ‘Satisfaction’ by the Rolling Stones, ‘Heart Full Of Soul’ by the Yardbirds and ‘Keep On Running’ by the Spencer Davis Group is the definitive fuzz sound. 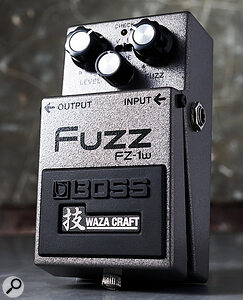 The Gibson Maestro Fuzz and the UK‑designed Tone Bender were the big hitters back then, though the Dallas Arbiter Fuzz Face rose to fame when adopted by Jimi Hendrix, who also used fuzz pedals made by Roger Mayer. In later years we got thicker‑sounding fuzz units, such as the various incarnations of the EXBig Muff, and today there’s a wide range of fuzz sounds available. The common denominator is hard clipping and a somewhat raspy character when they’re pushed that bit harder.

Stompbox stalwarts Boss have now launched a Waza Craft Fuzz pedal, which uses new circuitry that aims to recreate both those old‑time fuzz sounds and some more modern variants. Using all‑analogue circuitry and built using premium components, the Waza Craft FZ‑1W comes in the familiar Boss pedal format and can be powered from a 9V battery or external PSU. A two‑way switch selects between Vintage and Modern tonal characters, while in the knob department there’s Level, Fuzz (drive) and Tone.

Boss admit to being inspired by historic circuits, but the FZ‑1W doesn’t purport to replicate a specific vintage device. Instead it sets out to capture their general essence in a modern pedal that behaves consistently; many of the older units seemed to change behaviour with the weather, especially those that used germanium transistors! The FZ‑1W uses silicon transistors for stability, higher gain and lower noise than typical vintage fuzz boxes.

This ability to clean up is something that most old school fuzz units just didn’t do at all well.

With the switch set to Vintage, you certainly get the old‑school rasp, and plenty of adjustment using the the Tone knob, which simultaneously tweaks both high and low frequencies — essentially, it’s a tilt control. In conjunction with your amp’s tone controls, then, you can get close to those old‑school fuzz sounds but with satisfyingly lower background noise and more usefully ‘polite’ note endings. The sound also cleans up surprisingly well as you back off the input level, and if you dial back the Fuzz you can get into Neil Young territory.

In Modern mode, the Tone knob again adjusts both high and low frequencies but with a different tuning for a generally fatter sound and more flute‑like high notes, so you can go from a thick and creamy fuzz to an aggressive ZZ Top‑style growl. At lower Fuzz settings the pedal acts as a ‘hairy’ boost accentuating the mids, while backing off the guitar volume again cleans up the sound to a very useful degree. In fact this ability to clean up is something that most old‑school fuzz units just didn’t do at all well. The other non‑vintage benefit is a good‑quality buffered bypass with no clicks. So, does the Boss Waza Craft FZ‑1W sound like a vintage fuzz? In the areas where it matters, it can certainly cover those ’60s sounds, but its modern niceties make it more controllable and indeed more flexible. Some may miss the eccentricities of vintage fuzz units but I suspect most players will appreciate being able to consistently dial in the desired result.