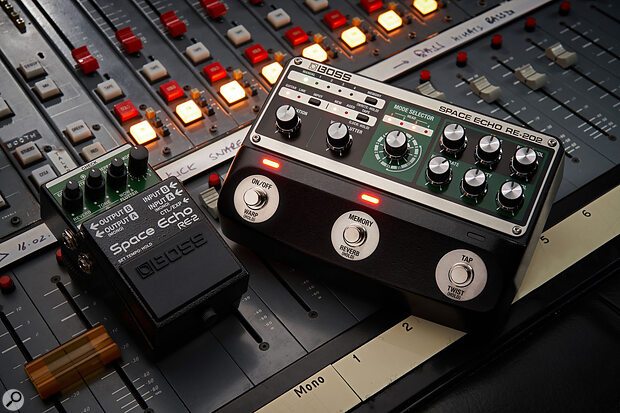 Over the years, I’ve used a number of different tape‑based echo units and, as it happens, the last one I owned was a Roland RE‑201 Space Echo. Swayed by the promise of reliability and convenience, I sold it when digital delays came along... and very soon came to realise that none of the early digital delay boxes had the same mellifluous quality as real tape echo! As digital technology evolved, though, designers started building in saturation, EQ and pitch modulation, trying to get closer to the sound of tape, and by 2007 Boss had launched their RE‑20, a digital analogue‑modelling pedal based on the Space Echo. Given the technology available at that time, the RE‑20 sounded pretty impressive — but, while I’d still be happy enough to use one, 15 years is a long time in the world of digital technology.

Plenty of others have since delivered impressive‑sounding emulated tape‑delay pedals so, with more processing power now at their disposal, Boss decided 2022 was the year to revisit the Space Echo. There are two new pedals, the RE‑2 and RE‑202, and both benefit from the more sophisticated modelling algorithms that Boss developed specifically for this project.

The RE‑202 has a cast‑metal chassis and a top panel that’s strongly reminiscent of the original RE‑201 tape delay. It has three footswitches (the RE‑2, discussed in a separate box, has only one) and adds programmability, variable saturation, new or old tape modes, preamp modelling and an extra replay head. It also doubles the maximum delay time of the RE‑201.

To the left of the panel are five LEDs and a button that steps through them, to access four memory slots or switch to a manual mode that reflects the current control settings. Other buttons select between guitar and line‑level inputs and between new and aged tape condition. Both saturation and wow & flutter are continuously variable.

In the centre of the panel are the mode selector and four LEDs that show which of the virtual tape heads are active. As there are four heads here, the Mode options are rather more extensive than for the original RE‑201, with modes 8‑12 including playback head four. Reverb is brought in with a press and hold of a footswitch and this effect has a separate level control. Although the original spring reverb of the RE‑202 is modelled here (but in stereo), the user can also opt to switch the reverb type to Hall, Plate, Room or Ambience. The original short spring of the RE‑201 had a noticeably metallic quality and that’s replicated here very authentically, but the alternatives make the reverb versatile, and are very welcome.

On the right of the RE‑202’s top panel are the familiar bass, treble, reverb volume, repeat rate, intensity and echo volume controls. Note that the tonality changes with delay time, just as it did on the original, and when the Intensity is turned right up, you get authentic dub‑style runaway oscillation. Though it may have compromised the vintage look of the pedal, I would have found a bpm indicator useful, since that would allow very precise time setting when creating user memories.

Each of the three footswitches has a normal mode and a press‑and‑hold mode. The switch to the left operates bypass, but when held down the delay feedback is increased to create an indefinite repeating effect until the switch is released again. The middle switch steps through the onboard memory settings, or you can press and hold to turn the reverb on or off. To the right there’s tap tempo, but if you press and hold, another self‑oscillation effect called Twist comes into play — this creates an upward pitch spiral with runaway feedback, putting me in mind of a spaceship with a faulty starter motor!

This time around, I reckon Boss really have nailed the vintage sound of the RE‑201.

On the rear panel there are stereo ins and outs on jacks, but the user can opt for any permutation of mono or stereo ins and outs. A TRS jack takes either a dual footswitch or an expression pedal. There are MIDI in and out mini‑jacks (custom jack‑to‑DIN cables are available separately), a micro‑USB port (for firmware updates) and a PSU input for the included power supply. There’s also a ground terminal, which could prove useful if using with a laptop recording system that has no other ground connection. 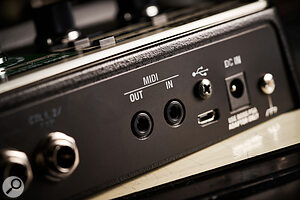 Unlike the smaller RE‑2, the RE‑202 features MIDI I/O on TRS mini‑jack sockets.Up to 127 presets can be stored and recalled when using MIDI, four using the onboard buttons and with MIDI accessing memories five to 127. The RE‑202 can also lock to MIDI Clock, which will be important to DAW users. A connected expression pedal can morph between two sets of knob positions and the alternative functions are configured using ‘power up’ routines. These include a dry kill setting, for using the RE‑202 in an effects loop where only the wet sound is needed, and an option for setting whether the dry sound is clean or coloured by the preamp model. When set to On, this still affects the dry sound when the unit is bypassed, adding a little warmth and rounding off the highs. It’s also possible to set the delay tails to either stop abruptly or to fade naturally away after you hit the bypass footswitch. Any masochists out there who’d like to limit the maximum delay time to that offered by the original RE‑201 will be delighted to know that this too is a setup option.

To get the authentic Roland tape echo sound with the RE‑202, I found that I needed to juggle the amount of saturation and wow & flutter. Rolling off a little low end on the repeats while boosting the highs created a very believable tape‑style repeat, with just the right amount of degradation as the repeats faded. Changing to the aged tape setting dulls the repeats a little and overall the effect is very much as I remember from my original RE‑201, and similar to the software modelling plug‑in versions I have. A big exception, of course, which might give the game away to some but which most (myself included) will consider a vast improvement, is the lack of audible tape hiss!

This time around, I reckon Boss really have nailed the vintage sound of the RE‑201, and made it available in a couple of practical form factors. Significantly more pedalboard real estate is required by the RE‑202 than the RE‑2, and with the larger model being a fairly thirsty digital pedal, there’s no battery powering option. But if you need the features provided by those three footswitches, programmability and dedicated controls that are easy to adjust during a performance, then the RE‑202 is really nice. The variable saturation, extra head and switchable preamp modelling are welcome extras too.

By using three dual‑concentric pots and an 11‑position rotary mode switch, the RE‑2 crams most of the functionality of the three‑head RE‑201 into Boss’s popular compact pedal format, and unlike the RE‑202 it can be powered from a battery as well as by a PSU. It retains the RE‑202’s stereo ins and outs, and still offers double the RE‑201’s maximum delay time, but its small controls invite more of a set‑and‑forget approach than real‑time tweaking. In addition to the mode selector, there are controls for echo and reverb levels, intensity and tone, repeat rate and wow & flutter.

The RE‑2 produces the same basic sound character as the RE‑202, so it is no poor relation and is certainly more pedalboard friendly. But inevitably there are some compromises — so what do you lose? Well, the RE‑2 offers only a (stereo) spring reverb (on modes five to 11), and it forgoes variable saturation, tape age switching, preamp coloration switching and the extra head, as well as the ability to store presets. Delay tail ‘carry‑over’ can still be set via a slide switch on the rear panel, though. There’s a single ‘tilt’ tone control rather than separate bass and treble controls, and tap tempo is accessed by pressing and holding the footswitch to enter and leave tap mode, though this operation can, if you prefer, be reconfigured to bring in the Twist effect when holding down the pedal. There’s also no MIDI connectivity on this model. However, there is a TRS control jack input, and you can use that for an optional dual footswitch to engage tap tempo and to activate the Twist effect, or you can hook up an expression pedal to morph between two sets of control values.

Combining a convincing sound with plenty of control, Boss’s new generation of Space Echo pedals represent a significant improvement on their older RE‑20.