The dynamic equaliser can be a secret weapon for fixing faults at the mixing or even the mastering stage, and Brainworx' innovative plug‑in implementation offers novel M/S features. 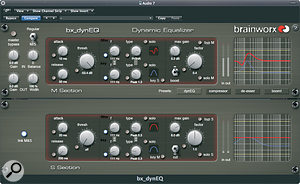 Dynamic equalisers are extremely useful processors, yet they seem to get less than their fair share of attention. Like compressors or expanders, they operate on a threshold system, so that the desired EQ cut or boost curve, as set by the user, comes into play only when the signal exceeds a threshold. This type of processing can be used to de‑pop, de‑ess, boost weedy kick drums, suppress vocal harshness when singing loudly, and so on, but the stereo version of the BX_dynEQ model from Brainworx also has mastering applications, made more powerful by its M/S capabilities. Like most of Brainworx' plug‑ins, it can split a stereo signal into its sum and difference (also known as Mid and Side) components and process these separately, before recombining them. This allows the centre‑panned elements of a typical mix, such as vocals, bass guitar and kick drum, to be processed in a different way from sounds panned left or right. BX_dynEQ is available in the common Mac and PC native formats (AU, VST and RTAS) as well as TDM, and is sold separately and as part of the comprehensive BX bundle.

BX_dynEQ can not only filter the middle and the sides signals of a stereo mix individually, but it can also 'cross‑feed' the trigger signal from the mid source to the sides processor and vice versa if required. The example given of an application for this option is that the dynamic EQ of the sides signal could, in theory, be triggered by the kick-drum frequencies in the mid signal. This is possible because the trigger signal can be treated via a tuneable, variable‑width band‑pass filter to make the processing most responsive within a specific frequency range. Where the trigger and processing filters need to be set to the same value, there's a Link switch that causes both values to 'track'. Other parameters within the middle and sides processing sections can be linked where appropriate. Both the 'M' and 'S' sections have separate Attack and Release controls to determine how quickly the EQ change comes in and out once the signal passes the threshold.

A further addition to the control set is the so‑called Factor process, which appears to adjust the effective 'ratio' of the dynamic processing, just as a compressor ratio control determines how the gain control comes in once the signal rises above the threshold. The higher the Factor setting, the more assertively the EQ boost or cut comes in once the signal has crossed the threshold. The EQ curve can be set to cut or boost signals that exceed the threshold; the former would be used in typical applications such as de‑essing or de‑popping. Solo and Mute buttons for the Mid and Sides signals make it more obvious what the processor is doing, and there's a wide selection of useful EQ shapes in addition to the standard, variable‑width bell curve. On offer are low and high shelving filters, peak bands, band‑pass filters, high‑pass, low‑pass, bass‑shift and presence‑shift. The shift EQs have both boost and cut at different frequencies and their width may be adjusted. In all cases, the user can set the maximum amount of cut or boost to be applied via an intuitive graphic display that shows the real‑time EQ curve and the cut or boost limits. There are also conventional output level meters and controls for adjusting input and output levels.

To simplify operation, there are four preset modes, labelled DynEQ, Compressor, De‑Esser and Boom, the last of which is also available as a very simple stand‑alone plug‑in with just two controls. DynEQ is the normal dynamic EQ mode I've already described, Compressor uses a flat EQ setting to function as a standard compressor, and the De‑Esser preset applies EQ cut to sibilant frequencies, with fast attack and release times. Boom is only available in the stereo version of the plug‑in, and is optimised for bringing out low‑end punch in kick drums, either individually or within a stereo mix.

The mono version of the BX_dynEQ plug‑in shows up as a virtual front-panel with a graphical display to the right. In stereo mode, a second panel appears below the first, housing a similar set of controls and display for handling the 'sides' part of the M/S equation.

As a basic dynamic equaliser, the BX_dynEQ is as easy to use and as good‑sounding as any I've tried, and the graphical display gives a good insight into which frequencies are being cut or boosted and when. Using it in its M/S mode requires some understanding of what M/S recording is all about, if you are to get the best out of it, and in all modes you have to keep your wits about you, as there are more variables that affect the end result than in a standard equaliser or a standard compressor. Perseverance does pay off, though, and the benefits soon become apparent.

Conventional EQ processes all sounds at all levels, but using a dynamic EQ you can apply EQ only when the signal within a certain frequency range exceeds a certain loudness, as set by your threshold and trigger filter settings. This lets you add punch without mud, or crispiness to a snare drum in an overhead mic track without also boosting all the cymbal hits that come between. If you have a singer whose voice gets very harsh when they start to belt it out, you can use a dynamic EQ to take the edge off, while leaving lower‑level sounds untreated. In fact, the more you think about it, the more applications you come up with. The only function that seems to be missing, to me, is an Under/Over button to reverse the dynamic principle, so that the processing is applied for signal levels below the threshold rather than above it.

BX_dynEQ is a great tool for the job, but be prepared to spend a little while getting to know it, especially if you are unfamiliar with dynamic EQ or M/S processing.

There are several dynamic equalisers around, if that's all you need, including the one for TC's PowerCore platform, but BX_dynEQ is the first I've tried that includes both M/S processing and separate trigger filtering. 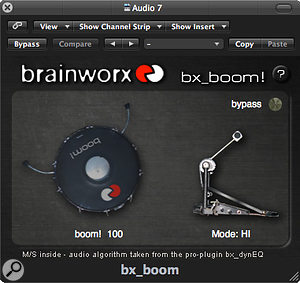 The stand‑alone Boom plug‑in is only available in a stereo version, and is the exact opposite of BX_dynEQ in terms of complexity, as there are only two controls. A kick‑drum graphic turns out to be an Amount knob for boosting or attenuating the effect, and a kick‑drum pedal is a three‑way switch for selecting the frequency range for processing (32, 48 or 64 Hz). The knob also seems to be linked to the processing threshold. Apparently, the low boost is applied only for around 50ms per hit, so the sound never gets messy. The bass‑drum knob flashes when an over‑the‑threshold hit is detected: avoid having it lit all the time or the dynamic effect will be lost.

I used Boom to rescue a badly recorded kick drum with no real weight to it, and it did a great job. Simple though it seems, Boom includes the M/S capabilities of the full BX_dynEQ, so that kick drums can be equalised (both positively and negatively) within a stereo mix without upsetting the side signals, hence the reason the plug‑in is stereo. Personally, I'd have liked a separate threshold and amount control, rather than having them apparently combined, and perhaps a mono version without the M/S processing, but Boom is a great way to get results without having to think too hard, offering a powerful 'instant' solution hiding behind a trivially simple user interface.

These are extremely well thought‑out plug‑ins that offer great flexibility and excellent audio quality. Though seemingly quite complex, BX_dynEQ has probably been made as simple as possible, given the different processes going on under the hood, and for quick‑fix kick‑drum processing, Boom is as directly effective as Baldrick's war poem of the same name!