Big Fish Audio have already established a reputation for South American music sample libraries with their two 'Roots of South America' volumes, and two recent releases will add to this. Elements: South America (from here on, ESA) is part of their budget 'Elements' range, while South American Traditions (SAT) is a more substantial, full-price release. Quantity of material aside, the two libraries cover the same musical territory, are recorded by the same team of producers and musicians, and are organised in a similar, construction‑kit, fashion. ESA provides 23 construction kits, while SAT includes 89 (approximately 1GB and 3.2GB of loops, respectively, in the WAV format, all at 24‑bit). The kits are dominated by percussion instruments typical of the region, but all include pitched instruments too, with plenty of piano, bass and acoustic guitar added to the more traditional sikus, charango, bandoneon and many others. 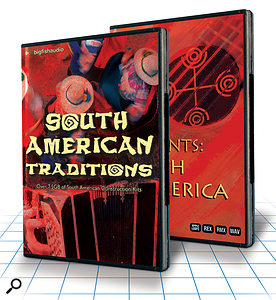 The material has been very well organised into named folders, and each kit includes a pre‑mixed version (usually between 15 and 30 seconds long and useful for auditioning) as well as the individual instrument layers as separate loops. Original tempos and key are indicated in the folder names, and both libraries also feature a number of the kits with identical folder names, bar an 'A', 'B' or 'C' label. In these cases, each kit could be used to form a discrete musical section (such as a verse or chorus) of a complete piece. These are very useful, but with a little care — and perhaps a little groove quantising — it's also easy enough to mix and match loops between other kits, providing that the original recording tempos are not too far apart.

The material is musically authentic: styles such as malambo, rumba, samba, tango, zamba and milonga, plus many other variants, are represented, and tempos range from a sultry 65 to a manic 160bpm. There's plenty of passionate playing, and thankfully only the occasional moment when things slip into 'lounge' territory. The now rather clichéd and derided — at least in the West — 'panpipe' moments (chulis or the flute‑like quena, for example) are also kept to a minimum. While ESA sticks pretty much with these traditional musical forms, some other musical elements are included in SAT, and hints of jazz and funk occasionally peep through. All that said, Latin musical influences are now embedded firmly in many current musical styles, and I could easily imagine these loops sitting perfectly into a Shakira‑style dance track or Santana‑esque pop/rock tune.

The appeal of both titles might be limited by the musical content, but media composers or pop producers who want a genuine South American element to add to their music ought to find plenty that's of use here. Given the relative pricing and volume of content, both titles also offer good value for money and ought to get you dancing around your studio. Highly recommended. John Walden