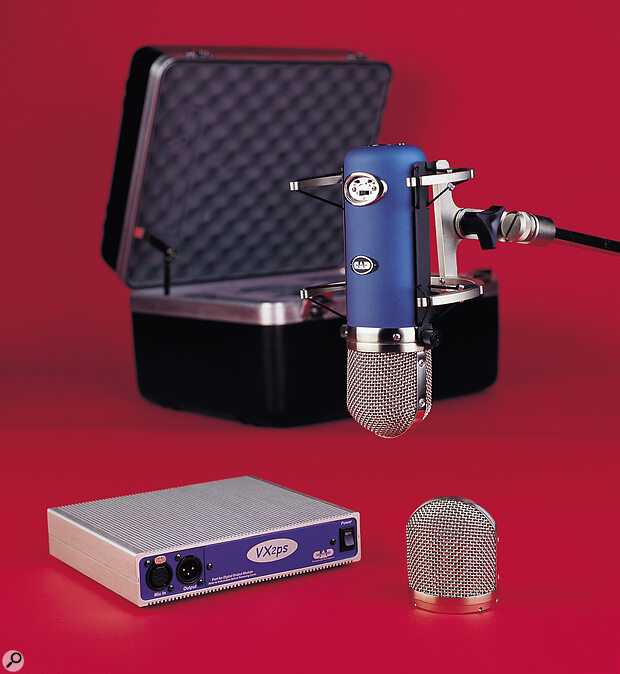 The flagship of the CAD range, the VX2 is a massive, dual‑capsule, dual‑valve condenser mic, with all the virtues associated with large‑diaphragm tube mics. Hugh Robjohns drools...

Over the years I have had the pleasure of using and reviewing most of the CAD product line, from budget electret mics right through to their VSM1 valve condenser. All have excelled at what they do, and I have a healthy respect for the Ohio manufacturer otherwise known as Conneaut Audio Devices.

The subject of this review is the flagship of the entire range and looks set to build upon the success of their previous tube mic, the VSM1 (reviewed in SOS August '99). The new VX2 is a large multi‑pattern, side‑addressed valve condenser microphone intended for a wide range of applications, but, I would suggest, primarily suited to vocals and close‑miked acoustic instruments. I can't really see anyone using these in a Decca Tree arrangement over a symphony orchestra (it would need scaffolding rather than a mic stand!), but you never know...

It will be apparent from the photograph that the microphone is designed to be used capsule‑downwards. This, combined with the matt‑blue body and chromed capsule grille and bezel surround, lends a funky retro look to the mic, which is intended to reside permanently in its suspension cradle. The mic is fixed with three thumbscrews (two side and one rear) into a sub‑frame, which is then suspended by elastic shock‑cord from the outer cradle C‑arms — substantial lumps of metal, adding considerably to the weight of the whole assembly. The mount is supported via a conventional threaded stand adaptor with adjustable angle joint. Removing the mic from the cradle isn't difficult, but is not something you would want to do too often. Just as well, then, that the carrying case is designed to transport the mic and suspension in their conjoined state. In fact, they only need to be separated to swap the capsule (see Little & Large box) or replace the internal valves.

For the Weights and Measures department, this beast tips the scales at a dense 850 grams and my ruler estimated its size to be 230 x 75 x 60mm (HWD). However, the steel cradle arms extend to the side of the mic, taking the overall width out to about 150mm. The power supply box measures a compact 44 x 213 x 184mm (HWD) but weighs a considerable 1.6kg, largely due to the internal toroidal mains transformer.

A recessed bezel towards the top (base?) of the mic carries three miniature switches: one to alter the polar pattern between omnidirectional, cardioid and figure‑of‑eight, another to select amplifier pre‑attenuation of 0, ‑8 or ‑16dB, and a third to introduce a high‑pass filter turning over at 80Hz. At the rear of the casing are a number of slots allowing the air inside, gently warmed by the thermionic valves, to escape, although the mic never actually gets more than mildly warm to the touch.

The amplification is configured in a dual‑path arrangement, employing two dual triodes, with one half of each handling the signal from one of the two back‑to‑back diaphragms. The tube complement consists of an ECC83 (12AX7) double triode (in this case a Russian Sovtek 7025 equivalent) together with an ECC82 (12AU7), which appeared to be an American 5814A equivalent in the review model — East‑West détente at its best! The 12AX7 provides the main gain and impedance‑conversion stages, whilst the 12AU7 provides the polar‑pattern switching and drives the custom‑wound, nickel‑cored, humbucking output transformer. The amplifier circuits have a bandwidth beyond 100kHz, for good linearity, although the performance of the capsule defines the overall frequency response.

Output level is similar to that of most condenser mics, and is quoted as 17.8mV/Pa or ‑55dB (ref 1V/µbar). The noise floor is equivalent to 13dBA SPL in cardioid mode, which is lower than for many solid‑state FET designs, though the figure worsens slightly with the other two patterns as they employ both diaphragms and both amplifier stages. The maximum SPL (for 0.5 percent distortion) is 146dB SPL (with the 16dB pad switched in).

The power supply occupies an extruded metal box with blue panels to match the mic. The rear carries an IEC mains inlet and voltage selector, while the front panel has a seven‑pin female XLR to accept the special mic cable plus a three‑pin male XLR for the audio output. A removable cover plate will enable a future 'Digital Output Module' to be installed. This will apparently provide a digital output supporting all the standard sample rates (up to 96kHz) with output resolutions dithered to 16, 18, 20 or 24 bits.

The VX2's frequency response seemed flat and neutral on all the polar patterns. These are all well defined, the cardioid having near‑perfect linearity up to around 5kHz, above which it narrowed substantially. The figure‑of‑eight mode exhibited good side rejection across the bandwidth, again with some noticeable narrowing of the response at extreme high frequencies. The omnidirectional pattern was a little disappointing though, as it seemed to become almost figure‑of‑eight in shape above about 6kHz — you could certainly hear the effect when it wasn't on‑axis to the source! However, none of this is really unexpected given the large diameter of the diaphragm.

I compared the two CAD capsules to a reference Neumann M147, and the smaller OS110 capsule came across as the 'brighter' of the two, but perfectly acceptable in its own right. In fact, both capsules had that slightly larger‑than‑life character common to large‑diaphragm mics, and compared very favourably with the big Neumann.

The complete microphone and cradle arrangement seemed resistant to mechanical vibration from the stand, with the omni pattern proving the least sensitive, as might be predicted. However, the lack of provision for any kind of mic cable dressing or strain relief (to provide isolation from cable‑born noise) is regrettable. Also, tapping the body of the mic generated more noise than I was expecting, and suggests that one or both valves are slightly microphonic. There are low‑microphony valves around, specifically engineered for this kind of application, but they are much more expensive than the plentiful 12AX7 and 12AU7. I didn't experience any microphony problems myself, but it could be an issue in very high SPL environments.

The bottom line is that the VX2 sounds absolutely fabulous — even if you couldn't see it, the sound would still let you know about its close‑to‑two‑grand asking price! It has all the warmth, and character that seem to make large‑diaphragm valve mics so special. Strangely, of those who heard it during my testing, more than half commented on how it sounded very natural. And it does — but not with the kind of 'stark reality' sound that you would obtain from, say, an Earthworks or DPA omni. You pay your money and make your choice — and I'll have this one please!

The ability to use different capsules is supported by a number of high‑end studio mics, but the VX2 is the first valve mic I've seen that allows it. Two complete capsule assemblies are supplied, both comprising the entire chromed grille section of the mic. The 'standard' unit, known as the OS125, has a diaphragm measuring 1.25 inches in diameter (within a 1.5‑inch frame), and the alternative is a slightly smaller capsule, denoted the OS110 (presumably a 1.1‑inch affair, although no details were supplied to confirm this hypothesis!). The standard capsule, and presumably the alternative too, are from CAD's 'Optema' series and feature a 3‑micron‑thick, gold‑sputtered polymer diaphragm manufactured and damped by hand at the company's

clean‑room facility in their Ohio factory.

Swapping the capsules is relatively painless, requiring the removal of only three small screws. Connections for the dual diaphragms and common back‑plate are through a trio of spring‑loaded, gold‑plated prongs. This interchangeable capsule facility is to allow 'sound tailoring'. Users will be able to select from a range of capsules possessing different frequency responses, thereby altering the fundamental sound of the microphone.

A difference in character was certainly discernible between the two capsules provided.

The CAD VX2 is an expensive but very classy large‑diaphragm condenser mic, which sounds as good as it looks, and offers the unusual (for a valve mic) flexibility of interchangeable capsules.