Q. Should my Valve Mic be this noisy? Skip to main content

Q. Should my Valve Mic be this noisy?

I have just got hold of a CAD M9 valve mic and am concerned about the noise level from it. When I switch it on it chuffs and farts a bit, much as my Fender valve amp does, then settles down. That seems OK. But once it has warmed up, the background noise level seems high compared to my other condensers. If I have a vocal take at normal levels being recorded at about -6dB peak, then the noise level is registering at -38dB. The vocal sounds fine, but the noise seems high. Is this what I should expect from a valve mic? Should I try another valve in it? 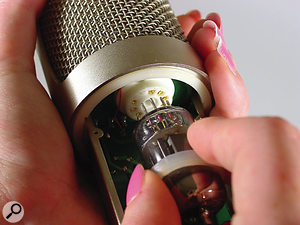 A faulty valve can easily be replaced; more serious repairs should be carried out by an experienced technician.

However, while it is possible that your mic is faulty or requires a new valve, the high noise floor you describe could also be down to poor mic technique.

With vocals peaking at -6dBfs, a noise floor of -38dBfs does seem poor. The question is, how much of that noise floor is due to the mic, and how much is due to the recording environment? Are you recording a low-volume source at a considerable distance, or in a noisy room, or with a poor-quality mic preamp, for example?

If you have access to another large-diaphragm mic, I would suggest you rig that alongside the M9 and adjust the gain to get the signal peaking at the same level for both mics, and then compare the background noise floors. If both mics deliver similar noise levels, then the room or your technique are at fault. If the M9 is more than a few dBs noisier than a solid-state large-diaphragm mic, then the M9 is in need of repair.

It could be that the valve is faulty or worn out, and certainly that's the easiest thing to replace yourself. However, there could also be a problem in the power supply or elsewhere in the mic's output circuitry, which would require a return to the supplier to be fixed.