Q. What is different about the varieties of Dolby noise reduction? 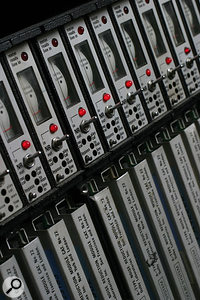 I never did quite understand the subtle differences between all the different variants of Dolby — A, B, C, HX and SR. Could you explain them to me? Are there any others I've missed? What are Dolby Labs doing these days? I guess they've undergone some 'reduction' themselves...

Technical Editor Hugh Robjohns replies: Dolby A was the first professional noise-reduction system — launched in 1967 if memory serves — and it used four separate frequency processing bands. You can think of them crudely as bass, mid-range, treble and high treble, with the top two overlapping so that the 'hiss region' was processed more heavily than the rest. Avoiding line-up errors between encoding and decoding was crucial, so the infamous Dolby warble tone was used to identify encoded tapes and to allow accurate replay alignment. Dolby A was originally used to get respectable audio performance out of early professional video recorders, but was later adopted for multitrack recording and cinema optical soundtracks.

Dolby B was a very simple domestic system intended to improve the performance of compact cassette recorders. It was also used on some later domestic quarter-inch machines. Dolby B was a single-band system affecting only the high end, with very modest compansion. It had no facility, or indeed any practical need, for replay alignment.

Dolby C was a much more aggressive multi-band version originally intended for small-format professional video-tape systems and narrow-gauge semi-professional studio multitrack recorders. It was very sensitive to mistracking, but was unfortunately designed without any line-up tone facility to calibrate playback levels.

In the professional market, Dolby A was superseded by Dolby SR, which was Dolby's most sophisticated multi-band noise reduction system. This employed 10 bands altogether, some operating at fixed frequencies and others moving automatically to suit the material, and allowed the user to achieve a signal-to-noise ratio of around 90dB from analogue tape. However, although it was a very clever and effective system it arrived just a few years too late and the digital revolution effectively eclipsed it. Dolby SR used a modulated noise signal for identification and replay alignment.

Finally, Dolby S (one you missed off your list) was a last-ditch attempt aimed at semi-pro and domestic recorders, and was a halfway house between Dolby SR and Dolby C. It still had no built-in line-up facility, though. It was used on some semi-pro narrow-gauge multitrackers and the last of the high-end hi-fi cassette recorders.

Dolby HX is not a noise-reduction system at all — it is a clever system to avoid over-biasing on analogue tape machines using high-output tapes. This system was used on some high-end domestic cassette recorders and the last of the professional analogue two-track machines, such as the Studer A807. Dolby HX is a once-only process that needs no decoding. In essence, it reduces the bias level if there is a lot of high-frequency content in the audio signal, thus preventing over-biasing and the noise artefacts and frequency-response errors that go with it.

Dolby Labs still make Dolby SR and A systems for analogue multitrack and cinema applications, and I guess they are still collecting licensing revenues from the other systems when they are used on domestic cassette recorders and the like. However, most of the company's efforts these days are geared towards digital data-reduction systems, which are based entirely on the frequency-masking principles first exploited by Dolby's analogue noise-reduction systems. That is why Dolby AC3 has always been amongst the best of the data-reduction codecs for a given data rate — the company had a major head start on the rest of the field.