Buying individual mics to mike up a drum kit, either live or in the studio, can be very expensive, but now that lower-cost imported microphones are available, you can buy a whole kit of drum mics starting at around the price of just one decent name-brand dynamic model. CAD have a good reputation for studio mics and so clearly don't want to be seen slogging it out at the rougher end of the food chain, but they've still managed to put together a nice kit of mics for a very affordable UK price. 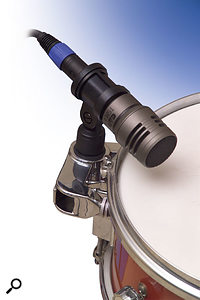 The set of CAD drum mics reviewed here comprises three TSM411 mics for use with toms and snare, a pair of ICM417 back-electret capacitor mics for use as overheads, and one KBM412 kick-drum mic, though additional mics may be purchased separately for larger drum kits. Packed into a foam-lined camera case, the kit also includes three very chunky pieces of chromed metal mounting hardware. These clamp around any handy tension lug on the toms or snare to secure the mounting against the drum shell, where the fitting sits firmly on two rubber feet.

This puts the mic in just about the optimum position, where the height (to an extent limited by how much exposed tension rod there is) and angle can be adjusted to taste. A thumbwheel behind one of the rubber feet adjusts the spacing and, when things are correctly set up, a single lever is used to attach and detach the fitting. There's space in the case for a couple more TSM411s or spare clamps, but I couldn't find any European thread adaptors, which you'll need to secure the kick and overhead mics on mic stands.

Starting with the snare/tom TSM411s, these use Neodymium magnets and offer a hypercardioid polar response to minimise spill from adjacent drums and cymbals. Their frequency curve looks fairly conventional, with a gentle roll-off below 100Hz to counteract the proximity bass rise that always occurs with cardioid and hypercardioid mics, complemented by a presence lift to add definition in the 3-10kHz range. Overall the frequency range covers 50Hz to 15kHz. The short and stocky shape of this mic makes it easier to position close to drums, though it surprises me that more drum mics don't come with angled connector sockets, as the effective length of the mic is almost doubled once you plug an XLR cable into it. According to the documentation, these mics are also suitable for use with other percussion instruments and guitar amplification.

For the overheads, there are two ICM417 back-electret capacitor microphones that are nominally flat from 40Hz to 20kHz, though they have a wide presence lift between 3kHz and 10kHz to help bring out the cymbals. These microphones again have a cardioid response and, because of their circuitry, require phantom power in the range 9-52V DC — standard 48V phantom powering is ideal. The mics are solid, but quite small, and they can handle SPLs of up to 130dB. In the context of an overhead mic, this should be more than adequate. Given the high noise level in which overhead mics spend their lives, sensitivity and noise figures tend to have little bearing, and in fact the EIN noise figure of these mics is slightly high at 26dBA. In any other context this might raise a few eyebrows, but so little gain is needed when miking drums that it's really not an issue. Normally these mics would be used as an overhead spaced pair or as a coincident pair. 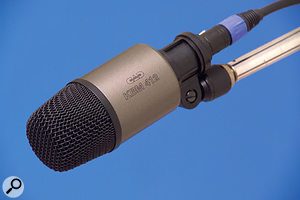 That leaves the KBM412 kick mic, a large-diameter cardioid dynamic mic with a neodymium magnet and a heavy die-cast barrel of a body. It is designed for the high-SPL environment likely to be encountered inside a kick drum and, like most dedicated kick-drum mics, has a response curve that looks like the hind leg of a donkey after being run over by a truck — and then reversed over by a tank! The usual hump between 70Hz and 90Hz accentuates the weight and thump of the drum, while the 'click' is brought out by a presence peak, or more correctly a series of presence peaks between 3kHz and 7kHz. Whereas vocal mics usually have subtle presence peaks in the order of 2-3dB, the bass and presence peaks here tower majestically at around 20dB, looking down on a mid-range plateau extending from under 200Hz to above 1kHz. In theory, this is designed to produce weight and definition without boxiness. The response rolls off above 15kHz, but the low end extends to 25Hz.

As a complete kit, these mics certainly look the business with their heavy cast-zinc shells and metallic-grey paintwork. The shockmount clips hold the mics very securely, yet have a reasonable amount of give to absorb vibrations, and the swivel joints lock up tightly enough to hold even the kick mic securely.

I didn't have a band with a drummer due in my studio at the time of this review, so I took these mics along on this month's Studio SOS visit where I knew they had a decent drum kit that they wanted our help with. Everything went smoothly until I tried to fit one of the shell clamps to the snare drum and found that there was insufficient range of adjustment. Slicing the end off one of the rubber feet would probably have done the trick, but as these weren't my mics I declined to follow that particular avenue of exploration and opted for a standard mic stand instead. 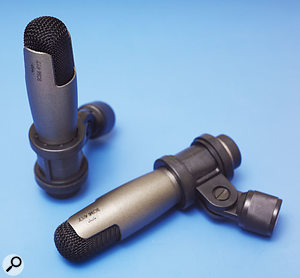 After making a test recording with each mic recorded to a separate track, we listened to the results and found the snare/tom mics to be pretty good. In fact there was little to choose between these mics and a Shure SM57 we used as a reference, except that the CAD models were smaller and easier to position. No problem there then, especially given the low cost of these mics. The overheads also turned in what I felt was a good performance, with not too much low end to conflict with the close mics. They delivered a tight, well-focused sound that accentuated the cymbals, and they didn't seem to allow too much of the room sound to intrude. In combination with the close mics they worked rather well.

That leaves the kick mic, which certainly delivered plenty of low-end punch, but seemed somewhat lacking in definition in the upper mid-range. We tried moving it around but couldn't get anything approaching what we wanted in the way of beater click without applying a lot of EQ. If you're after a '60s sound, it's probably OK, and similarly if you want a dance kick sound that's all thud and no slap it will handle that too, but it's probably not the best choice for a traditional rock/pop kick drum. Having said that, if you EQ it and also add in the overheads, it can get somewhere close, it's just that I like my mics to deliver something close to the ideal sound before I reach for the EQ.

Despite the somewhat disappointing high end of the kick mic (at least with the drum we tested it with), this package actually performs extremely well in all other respects, and the mic clamps are wonderfully solid and simple to fit provided that their range of adjustment isn't defeated by the tensioner-to-shell spacing of your drum kit. While the overhead mics probably aren't the best general-purpose capacitor mics around, they do work very well as overheads in combination with the closer dynamic models, and the mounting system seems to work well in isolating the mics from drum shell vibration. Perhaps angled XLRs would have made positioning even easier, but as a cost-effective and practical solution to drum-kit miking, both live and in the studio, this set has a lot going for it. We managed to get a very creditable sound from a kit in the living room of aan flatapartment, and that's a challenge at the best of times. At the price, this set is very good value, even if you decide to buy a separate kick mic for a more contemporary sound.

While there are now dozens of budget Chinese-built drum mics to choose from, these seem to work rather better than the cheaper models we've tried. The clamping system is also impressive, provided that it fits your particular drum kit. The only weakness in my view is the kick mic, which lacks the high-end definition I look for in a kick sound.