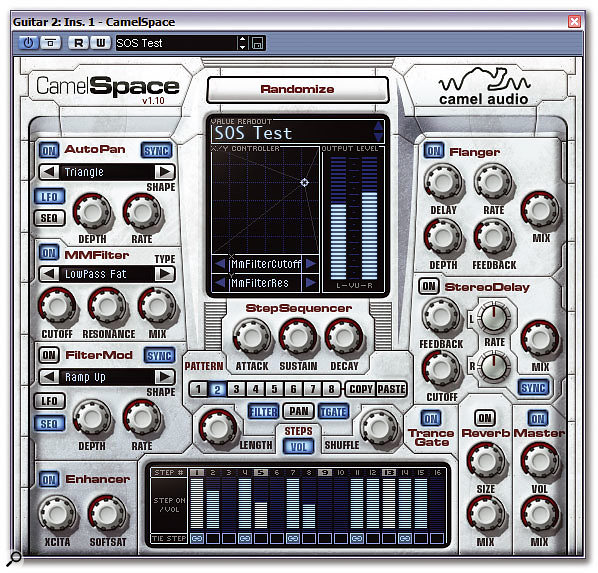 Camel Audio are a name that should be familiar to plug-in fans, having started out with the popular Camel Phat VST effect before unveiling the groundbreaking and critically lauded Cameleon 5000 additive synth. Lately, as well as updating Camel Phat to its third incarnation, they've given it a stablemate in the form of Camel Space, an interesting amalgam of a few studio staples along with some twists not found in your average effect plug-in.

Like its brethren, one of Camel Space 's biggest assets is its filter, which can provide 10 different modes of operation, comprising high-, low-, and band-pass algorithms in standard and 'fat' versions, along with the less common comb, notch, peaking and ring-mod types. As you might expect, 'fat' seems to denote more than just a steeper cutoff slope, instead affording the kind of grit and wallop that can make for much more pleasing filtering, not to mention the odd speaker-endangering resonant honk. It sounds great and provides a lot of versatility for broad and subtle applications, and there's a dedicated LFO to go with it.

Camel Space also boasts auto-pan, enhancer, stereo delay, flanger and reverb modules that are all very straightforward and conventional in operation. The reverb is particularly simple, with just Mix and Size controls, yet sounds pretty smooth and non-metallic — particularly taking into account its very efficient performance in terms of CPU use. The enhancer is another highlight, capable of providing both top-end lift and soft saturation that can vary between a nice gentle warmth and some quite raucous distortion.

Whilst the various modules add up to a nice set of effects, the real heart of the beast is a step sequencer with which you can modulate the pan and filter cutoff, along with a simple one-button output attenuator named the 'trance gate'. With up to 128 steps in eight banks, the sequencer provides quite some scope for sculpting evolving rhythmic sounds, and there's control over the attack, sustain and decay characteristics as well as the ability to chain individual steps together. With different modulation destinations selectable on each of the eight banks it's an exceedingly capable tool and one that's not too fiddly in operation to put a damper on experimental fun.

A run through the presets demonstrates well how powerful the sequenced filtering, panning and gating are in combination with the other modules. There are some great sounds on offer here, regardless of whether you want to make actual trance music, get seriously experimental, or just do 'How Soon Is Now' covers on the guitar. In fact, although only one of Camel Space 's numerous categorised presets has the 'GTR' prefix, I found it excelled as a guitar effect. There's also a lot to help you get the most out of the plug-in's potential for real-time performance, including an X-Y pad for linking and manipulating any two rotary controls, and MIDI learn functionality for hardware control if your host application supports it. Plus, there's an invaluable randomise button that works intelligently to help create fresh — and always usable — patches when inspiration runs low.

Overall, it's safe to say that Camel Audio have scored another hit, with a great plug-in that's as happy lending a little warmth and ambience as it is dealing all-out swirling wackiness. Thanks to an attractive, well thought-out interface and some very convenient design features, Camel Space is a pleasure to use and would make a good addition to anyone's plug-in folder. What's more, its very nicely priced at 45 quid, so I'd definitely recommend grabbing the demo and giving it a try. Mike Bryant

It seems that this year TC have launched a different Powercore reverb every few weeks, but to fair, they are all different and they are also of extremely high quality. The latest is DVR2, based on algorithms ported from the System 6000 processor and designed to generate what TC call 'generic reverb with true vintage flavour'. While room simulation reverbs are designed to create a specific sense of space, a generic reverb is more about adding reverb as an effect without suggesting any particular type of acoustic environment. 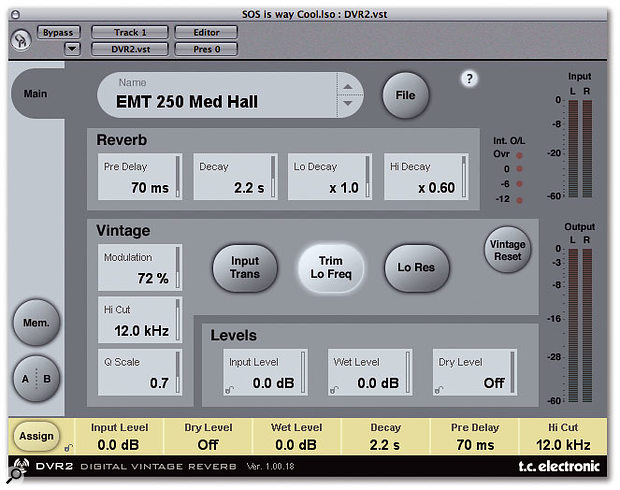 DVR2 has clearly been designed to model as closely as possible the tonal attributes of the famed EMT 250 digital reverb processor. While EMT are best known for their plates, the all-digital EMT 250 was extremely well respected by engineers and in some respects it was a convenient and modern replacement for their earlier plate units. It could thus be said that TC have attempted to emulate an emulation of a plate! DVR2 sounds plate-like without recreating the undesirable rumbling and ringing that is often evident in plate reverbs; it also includes internal chorus-like modulation drawn from the EMT 250, though what it definitely does have in common with plates is that there are no pronounced early reflections and the reverb density builds up quite quickly.

This type of reverb works well for adding to material that has already been mixed or partially mixed or that contains a degree of acoustic ambience already. Typically it gives a flattering, larger-than-life sound with a nice gloss but without getting in the way, and it also works well on moving (or panned) sound sources. Of course what may be considered attributes in some situations are drawbacks in others, and a generic reverb such as this diminishes the stereo imaging of sources. Where the modulation is used, it can also cause problems with instruments that don't include any natural modulation, piano being the prime example. That's why there are different types of reverbs available for different jobs. To my ears, DVR2 sounds very much like a cross between an early Lexicon reverb and a vice-free plate, and gives a nice steamy sizzle to the sound being treated.

TC's designers do seem to have worked hard to capture the authentic sound of the EMT 250 here, including electrical effects such as amplifier saturation and the original artifacts of the converters used at the that time. They've also worked to get the parameters to interact as they do in the real thing. DVR2 comes with a small but useful set of presets that can be easily tweaked by the user, and DVR2 presets can also be imported from the System 6000 platform. Compared with most software reverbs, the controls are very simple, affecting mainly the pre-delay, decay time, high cut and high/low damping of the reverb tail. A single slider controls the modulation and the high cut control also has a Q parameter for emphasising frequencies at and around the cutoff point. Two further buttons bring in emulations of the input transformer and low-end cut of an original EMT 250, while the Vintage Reset button claims to produce a sound that comes very close to that of a well maintained EMT 250. In high-resolution (non-vintage) mode, there's lower noise, wider bandwidth, and user control over the degree of modulation.

My tests with this reverb largely supported TC's claims, insomuch as I wasn't immediately transported to a club, a concert hall or a cathedral, but the reverb provided sympathetic musical support to the material, particularly to vocals. It has the airy, larger-than-life quality that made the original EMT 250 so popular, and because the EMT 250 didn't set out to capture the less welcome aspects of real plates, TC have not needed to model all the side-effects that engineers used to try desperately to EQ out of their plate reverb returns. As an addition to the existing TC Powercore reverbs, DVR2 works extremely well and provides a good alternative for material that would traditionally benefit from a plate reverb. Paul White