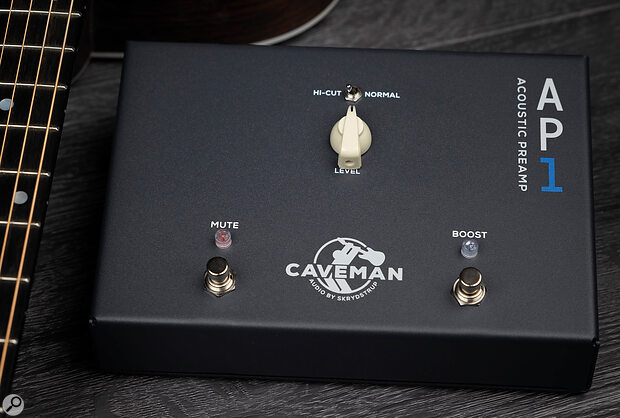 If you play acoustic instruments with piezo pickups and require the very best amplification, the AP1 is a serious contender.

Being a guitarist and the son of Bang & Olufsen’s chief engineer, it was almost inevitable that Steen Skrydstrup would one day develop his own products. Today he does that through his company Caveman Audio, whose main guiding principle is that, whether on stage or in the studio, the signal leaving a guitar should reach the input of its amplifier without any additional noise being introduced along the way. In live situations, of course, systems amplifying electric and acoustic guitars and basses often have to overcome greater obstacles than typically encountered in the studio, including radio signals, electrical interference from lighting systems and the like, and noise and hum from the mains supply and its ground. But Skrydstrup believes two basic challenges are presented by any audio system — impedance issues and matching, and signal‑level matching — and should be addressed both at the individual product level and throughout the whole system.

Over the years he has developed an approach that’s capable of reducing ground‑borne noise by 120dB, whilst at the same time making products and systems virtually immune to both radio frequency interference (RFI) and external stray magnetic fields. He’s had some high‑profile clients too, with guitarists and bassists such as Dave Gilmour, Steve Morse, The Edge, Ben Howard, Ida Nielsen and members of the Scorpions and Rammstein having availed themselves of Caveman’s custom‑build services over the years.

Alongside these high‑profile projects, Caveman have developed a small but significant range of guitar pedals, MIDI footswitch controllers, loop‑switching systems, tube amps, loudspeaker cabinets and preamplifiers for use with electric and piezo pickup‑equipped guitars and basses. And as someone who finds good‑quality acoustic instrument preamps almost irresistible, I’ve long lusted after their rackmount behemoth, the ACC1, which itself is a scaled‑down version of the Acoustic Guitar Unit Skrydstrup developed for the Scorpions’ 2014 MTV Unplugged tour. Now, Caveman have put the preamplifier stage of the ACC1 (which is an original design) in a significantly more affordable pedal, the AP1 Acoustic Preamp.

Given Caveman Audio’s devotion to the elimination of external interference, it was no surprise to find the inner workings of the AP1 encased on all sides by a rather large, dark grey, folded, zinc‑plated steel enclosure. The whole unit weighs 2kg. The top panel looks somewhat utilitarian, with the only features being the mute and boost footswitches (and their respective LEDs); a chickenhead rotary boost Level control; a mini‑toggle switch that brings in a high‑frequency damping function when boost is activated; and the company and product branding. In contrast, the rear panel offers several points of interest. An unbalanced high‑impedance TS jack for your guitar lead sits next to transformer‑balanced XLRs for the unit’s Radio (wireless) input and DI output. Adjacent to these are the transformer‑balanced amplifier and tuner jack outputs, along with a 9V DC out to power your tuner; a pair of red and green indicator LEDs that tell you if an input cable is good or shorted out (nice touch!); and a ground‑lift mini‑toggle switch. An IEC mains connector accepts 100‑240 Volts AC (50‑60 Hz) for the internal switch‑mode power supply. A version is also available with a second Radio input, for which Caveman charge an additional €100.

The AP1’s rear panel offers plenty of options by way of I/O.

The vast majority of the AP1’s internal circuitry, including its power supply module, is laid out on a large main board that sits beneath the device’s top panel. A small, horizontally‑mounted daughter board, which carries the amp and tuner outputs, cable‑status LEDs and the 9V DC output socket, juts in from the back. The two footswitches each have an even smaller daughter board soldered to their connectors and, amongst other things, these carry their respective switch’s LED, and are secured by a standoff, meaning the chances of flexing or unwanted vibration occurring in those areas are probably as close to zero as it’s possible to get — just one small example of the obsessive attention to detail that reduces the likelihood you’ll never need the 10‑year warranty that comes as standard with all Caveman Audio products and which speaks volumes about the build quality!

All input and output signal cables are shielded, and I would think that this helps to deliver the low level of overall noise that characterises the company’s products, in conjunction with the steel enclosure and the evidently careful circuit and PCB design that’s necessary to implement Caveman Audio’s concepts of ground‑borne noise reduction and RFI protection.

There’s no mystery involved in placing the AP1 at the head of your piezo‑equipped acoustic instrument signal chain. You can plug into either input or both, but the Cable input always takes priority. Despite the lack of an input level control you’re unlikely to find yourself worrying about overdriving the AP1’s input stage, since both the Cable and Radio inputs can handle up to +20dBm or 6.3V peak‑to‑peak. The maximum output level is also +20dBm (into a load of 1.5kΩ or greater).

The Cable input has an input impedance of 5MΩ, making the AP1 compatible with a wide range of piezo transducers. The pickups on my own acoustic instruments span a time period from the 1970s (piezo crystals removed from a record player stylus and early Barcus‑Berry piezo pickups) through virtually every piezo construction known to humankind (and a few home‑grown endeavours that largely aren’t!) to some of the more esoteric piezo‑based pickups around, and the Caveman Audio AP1 produced superb results from every pickup and instrument combination that I auditioned through it — including my banjos!

Since the AP1 has both input and output transformers, it probably won’t come as a surprise that it delivers an overall sound that combines warmth with clarity. I normally set the solo boost in my own preamps somewhere between +6 and +10 dB depending on the gig and, sound‑wise, I found this to be a veritable sweet spot for the AP1. Alongside its primary use in increasing volume for solos, Caveman suggest using higher levels of boost with low‑output piezo pickups. I have a guitar fitted with just such a pickup, in the form of a passive LR Baggs iBeam. Cranking the AP1 boost to its maximum +18dB produced a louder and subjectively more solid sound from the iBeam but, crucially, without any noticeable increase in noise from within the AP1 — impressive performance indeed, and most welcome.

The boost’s switchable high‑cut filter surprised me, in that its claim of ‘high‑frequency damping’ had led me to the theory that it might be some kind of parallel processing. In reality, the filter turns out to be a high‑shelf EQ, but it’s one which delivers a level of reduction in the high frequencies that’s directly proportional to the amount of boost — so adding 18dB of Boost will deliver an 18dB high‑frequency cut, a 12dB Boost gives a 12dB HF cut, and so on. The effect can be helpful in softening any sense of high‑frequency harshness.

The Caveman Audio AP1 produced superb results from every pickup and instrument combination that I auditioned through it — including my banjos!

From the standpoints of its construction and the quality of the sonic performance that it is capable of delivering, then, the Caveman Audio AP1 is a true tour de force. In fact, I’m left in no doubt that it’s one of the best‑sounding piezo‑pickup preamplifiers that I have ever had the good fortune to play through — and I’ve played through plenty of them!

The ability to connect a wireless receiver or another preamplifier (balanced or unbalanced) so it can take advantage of the AP1’s transformers, its appealing preamplifier stage, and its virtually noise‑free performance means that the Caveman AP1 offers wonderful flexibility in both live and studio contexts. Given its main competitors (of which more in the ‘Alternatives’ box), some people might view the AP1’s lack of onboard EQ and effects loop as an issue but it’s not by any means a deal‑breaker for me. And, as far as I’m concerned, the value to be gained from the quality of the AP1’s audio performance more than justifies its pricing.

So if, as they do for me, acoustic instruments equipped with piezo pickups lie at the heart of your music‑making, you should definitely regard the Caveman Audio AP1 acoustic preamp as an essential audition. For me, it may yet become an essential purchase too!

Although neither is directly comparable, the AP1’s price puts it between two obvious competitors: Grace Design’s BiX and AliX piezo preamplifiers. The same company’s FELiX 2 and Pendulum Audio’s SPS‑1 ecosystem are higher‑priced alternatives, with two channels.