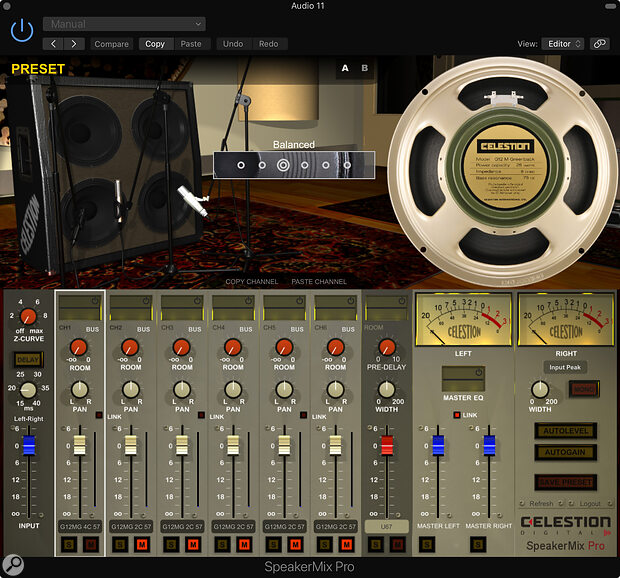 If you thought IRs were the closest software could come to the sound of a real speaker, think again!

Speaker manufacturers Celestion have dipped their toes into the waters of the software world before: they’ve been selling high‑quality speaker/ cabinet/ mic impulse responses since 2017. But while their impulse library is great their new SpeakerMix Pro plug‑in is even more impressive. Celestion tell us that SpeakerMix Pro “doesn’t do any convolution or interpolation of responses — even [with] user‑loaded IRs”. Rather, it’s based on what Celestion call Dynamic Speaker Responses, or DSRs for short.

A traditional IR is essentially a snapshot of one set of conditions at one signal level, but the DSR technology allows the virtual speaker to respond dynamically, so that it takes on the characteristics of a real speaker under different drive conditions. Celestion are obviously reluctant to share full details of what’s going on under the hood, but it seems that the DSRs are based on analysis of their IRs, and use algorithmic modelling of some sort to dynamically generate harmonics relative to the user’s playing and the driving power of the amp, as set using the blue Input fader on the left. Whatever technology is used, it works very well indeed! Another major feature is a Z‑Curve control, which mimics the complex output impedance of a guitar/bass amp, so influences both the tone and the feel when playing.

Supporting the usual Mac/Windows plug‑in formats (VST, AU and AAX), SpeakerMix Pro allows the user to choose any 10 of Celestion’s guitar or bass DSRs at the time of purchase, though there’s also the option of adding more later via Celestion’s online store.

SpeakerMix Pro is so‑called because it takes the form of a mixer that allows up to six miked cabinets to be combined. The top half of the screen shows the miked cab and selected driver, with a horizontal slider to choose the mic position. In a mixer section below, each channel has an EQ, Level fader, Pan and a Room send control. (Channel settings can be copied and pasted.) To the left is the input section, whose Input fader controls the driving power to the DSRs on each channel. This is not a simple gain control, but mimics the amp’s power, running from 1W up to the maximum power rating of the speaker modelled by the DSR in question. For example, a V30 at +6dB is running at 60W input with harmonics that respond dynamically to the user’s playing around that power level.

The Z‑Curve control is also found here, and relates to factors including inductance, damping factor and resistive load, among others. In practical terms, turning the Z‑Curve control clockwise delivers that familiar loosening of the low end, combined with a slight reduction in the mid‑band and a small increase in the highs, as happens when a real valve amp meets a real speaker cabinet. When using SpeakerMix Pro alongside your amp modeller of choice, then, you can use the Z‑Curve control to recreate real‑world amp/cab combinations or more experimental setups, as you prefer.

Another input‑section option introduces delay, between the left and right channels or via one of two Mid‑Sides algorithms. The Room channel has controls for Level, stereo Width and Pre‑delay as well as EQ. The EQ for each channel includes not only the expected three‑band affair, but also high‑ and low‑pass filters and a ‘tilt’ filter. The same EQ is provided for the master bus, which also has separate left and right Level controls, stereo Width adjustment and a Mono button. Further buttons activate Autolevel, Autogain and Save Preset. 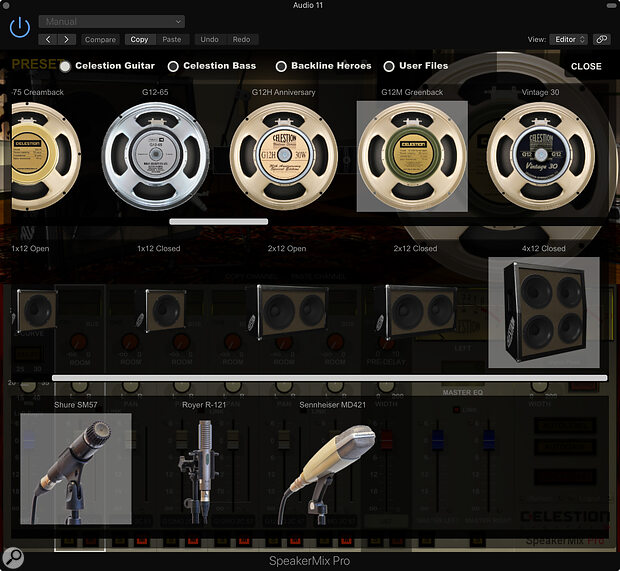 As you’d expect, there’s a good selection of speakers, cabinets and mics in DSR format. Up to 10 speakers are included in the purchase price, but you have the option of buying more and can import IRs.

When choosing speaker setups for the mixer channels, a graphic showing the cabs, mics and driver types occupies the whole screen; unavailable options are greyed out and a padlock icon indicates which must be purchased before use. For closed‑back cabinets there’s a choice of Shure SM57, Sennheiser MD421 or Royer R‑121 mics and for open‑backed cabinets there’s an additional Shure SM57 rear mic. Clicking on the Backline Heroes button reveals a number of DSR emulations of specific speaker cabinets but at the time of writing these and some speakers were not yet available in DSR format. (Visit www.celestionplus.com/products/dynamic-speaker-response-dsr for details of what’s available in DSR format.) SpeakerMix Pro’s DSR algorithm can also create a dynamic model with generalised parameters from imported static IRs, making them dynamic, and fully compatible with Z‑Curve. There’s no convolution going on; the plug‑in creates a kind of ‘DSR‑Lite’, with the phase, dynamic, harmonic and feel benefits of the DSR algorithm.

While the position of the mic relative to the speaker axis can be adjusted, the close‑mic distance can’t be varied. I asked Celestion why this was, and they told me that “the Dynamic Responses are informed by and built upon the foundations of our IR library. As such we have opted to stick with the existing mic positions and exploit the DSR algorithm for non‑interpolated morphing of the mic position.” The plug‑in isn’t left without a sense of distance, though: a room mic channel offers a choice of four time‑aligned room mics (Vintage Neumann U67, Sontronics Apollo, Vintage STC‑4033 and Neumann TLM‑107s) that can be mixed in with a variable pre‑delay of up to 100ms, and there’s the option for users to add their own room IRs. Clicking Bus on each mixer channel allows a choice of routing to the room bus mic, the user’s own rooms or the Speaker Excited Room, which uses TLM‑107 room mics picking up the same driver/cab combination running on that channel.

The Z‑Curve control plays a crucial role in getting both the feel and the sound to appear natural.

The lack of mic distance control surprised me but I didn’t miss it: the speakers and cabs all sound really good as they are. Choose your 10 cabs wisely and they’ll cover most eventualities, and by combining them in the mixer and using the comprehensive channel EQ, they can cover more ground still. That Z‑Curve control can also breathe new life into your existing IRs, but if you’re still left wanting more, you can always buy more DSR models. 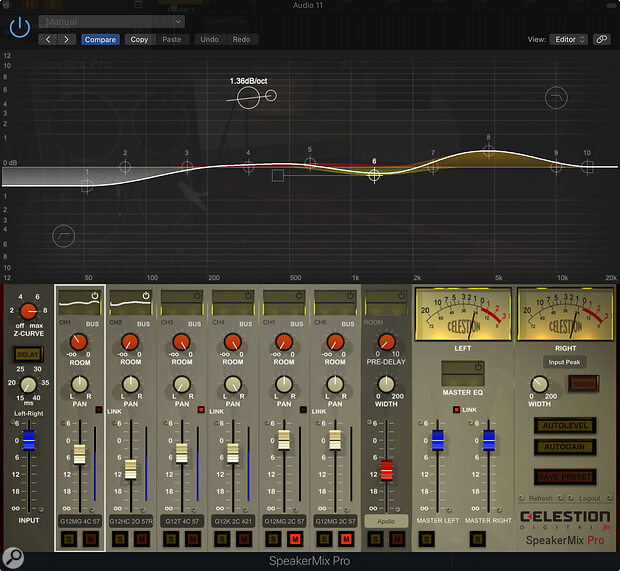 Each channel, including the room and the mix bus, has a versatile EQ section.

SpeakerMix Pro doesn’t emulate the amp itself, only the speaker cabinet and its interaction with an amp and the mic/room, so it’s best used after a third‑party amp emulator with its own speaker emulation turned off. As part of my test process, I used SpeakerMix Pro in place of the on‑board cab emulation to process some of Logic Pro’s guitar amp models. SpeakerMix Pro coaxed far more believable results from them. It can also do a good job of processing the output from a pedal (I DI’d via a range of drive pedals to good effect), preamps, or full guitar amps running into a load box. Having said that, I managed to get some very satisfying results on clean sounds simply by EQ’ing the DI signal from my Strat before going into SpeakerMix Pro. It was similarly effective on DI’d bass.

The Z‑Curve control plays a crucial role in getting both the feel and the sound to appear natural and it spans the range from tight, well‑controlled amplifiers to those that leave the lows under‑damped, delivering the sense of ‘real cabinet punch’ that seems to be missing from so many speaker cab emulations. Panning two or more speakers left and right and adding a little left/right delay added some nice stereo interest to the sound.

In summary, SpeakerMix Pro brings in‑the‑box guitar processing much closer to the sound of a miked amp in a good‑sounding room. I can’t claim to have used every speaker emulation during my tests (there are so many now) but I’ve used many and whether playing through it or reamping through it, to tweak the tone, this one is better than any other I’ve heard.

The SpeakerMix Pro plug‑in can be loaded onto any number of machines, but the owner must log in to use the plug‑in. You can enjoy up to 7 days offline use before a login is required, and if you have an internet connection during the seven‑day cycle everything happens in the background — in other words, you won’t need to enter your credentials again unless you’ve deliberately logged out.

The plug‑in can run on up to three machines at the same time but there is a time‑out period of 12 hours, should you want to switch one instance to a different machine once you already have three machines running. You can ignore the ‘Remember me on this machine’ option so that login credentials aren’t saved, and the Logout button clears the locally stored encrypted user credentials and frees up a license slot on Celestion’s server. A Refresh button will refresh all of your DSR licenses.

Some users may find this system frustrating, but it has benefits, in that you can load the plug‑in onto a machine in a different studio and simply log in to use it — that should be appreciated by those who collaborate with other musicians.

SpeakerMix Pro is a genuine step forward in cabinet modelling that can breathe new life into amp models you may previously have given up on. Its ability to respond dynamically to your playing and to capture that important low‑end cabinet ‘thump’ is remarkable.