PA veterans Cerwin-Vega expand their popular P-series with the launch of this compact yet powerful active speaker.

Cerwin-Vega have been making loudspeakers for over half a century, and when I first encountered them they were building bass bins that you could park a car in. Things have changed since then and the company have diversified to cover pro audio, home audio/multimedia, amplifiers and smaller PA systems for the gigging musician or DJ. Cerwin-Vega are currently owned by Gibson, a company still best known for their guitars, but who in fact have a much wider remit than you might imagine. The P1000X 10-inch active speaker, introduced in summer 2014 and reviewed here, is the new baby of the P-series and follows the increasingly familiar format of a two-way, bi-amped, ported speaker with some basic mixing facilities, all built into a moulded cabinet. Also familiar is the fact that it is built in China to take advantage of lower manufacturing costs.

The built-in mixer comprises two mic/line channels with independent level controls, plus a third line-only channel that sums its two quarter-inch jack inputs to mono so as to allow the straightforward connection of an external stereo music source such as an MP3 player. Both mic/line channels use a combi jack/XLR input connector, with input sensitivity selected via mic/line slide switch. Each channel also includes a balanced thru connection on an XLR. A mix output is available on a balanced XLR, and this mix also feeds the internal circuitry via a master level control.

The speaker’s 10-inch woofer and 1.75-inch-diaphragm horn-loaded compression driver are fed from a total of 1000W of Class-D amplifier power. The one-inch-throat horn produces a coverage pattern of 90 degrees in the horizontal plane and 65 degrees in the vertical. The specs show that the ±3dB points are at 61Hz and 20.6kHz, and despite the compact size, there’s plenty of level on tap with a capability of up to 128dB SPL at one metre. 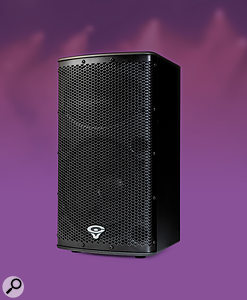 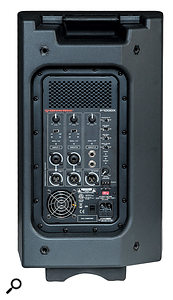 The P1000X has an incorporated three-channel mixer, which can accommodate two mic/line signals plus a stereo line input (which is internally summed to mono).There are also switchable EQ options, specifically enhanced EQ (which seems like a gentle smile curve), bass boost, and high-pass filters for use with a subwoofer such as the P1800SX. A rear-panel switch also activates a front-panel limit LED, which means the mix engineer can see if excess level has driven the speakers into limiting without having to look behind the speaker. There’s also a remote connector to accommodate an optional remote control. All this makes the P1000X fairly versatile as it can be used singly, in pairs, or with a sub for front-of-house use, depending on the venue requirements. Its cabinet shape means it can also be used on its side as a stage wedge monitor.

In common with many smaller speakers, the P1000X utilises a moulded polymer cabinet with a steel grille protecting the speakers and a 35mm pole socket in the base, which is also fitted with sturdy rubber feet. It does, however, feel a lot more solid than most plastic-box speakers, where tapping the cabinet shows it to be pretty well damped. It also has threaded M6 mounting points for flying or fixed installations. Measuring 648 x 381 mm, each speaker weighs 16.78kg, and on picking one up, using its integral top handle, I felt it was a little more substantial than most plastic-box 10-inch speaker systems I’ve come across.

As the maximum SPL figure suggests, there’s plenty of level on hand for such a small box, with vocals coming across very cleanly and clearly. My own feeling is that it is easier to design a 10-inch speaker to sound good in the mid-range than, say, a 12- or 15-inch system, as the drivers have less of a struggle to meet gracefully at the crossover frequency. The P1000Xs can sound a little less than hi-fi on full-bandwidth material if you push them hard, but then most small PA speakers do. If you need them to handle significant levels of bass then adding one or two subs is the best way forward.

There’s an awful lot of competition at this end of the live-sound market but the P1000X has the ability to play loudly and to deliver clean vocals, while not taking up too much space in transit.

The list of alternatives is long, and includes Mackie, Alto, JBL and most of the other big-name speaker manufacturers.

The P1000X is a good example of a well-designed plastic box speaker and combines compact size with the ability to deliver vocals at an impressive level.