Blue are known for their innovative mic designs, and now they’ve applied that originality to their first set of studio headphones.

The technology behind moving-coil microphones and headphones is very similar, which is why many of the big names in microphones also build headphones. Blue Microphones have now also taken the step of adding headphones to their range, but in the light of how many mobile device users now use serious headphones rather than cheap and cheerful earbuds, they’ve come up with an active design powered by an internal battery, which marks an important step. In the studio, where we have dedicated headphone amplifiers, passive headphones are absolutely fine, but many mobile devices actually struggle to provide enough clean power to drive professional headphones. Active phones solve that problem.

That might suggest that Blue’s Mo-Fi (‘mobile hi-fidelity’) phones are intended for the more discerning consumer rather than the audio professional, and to a point that may be true, but as more serious audio software makes the transition to tablets and smartphones, there’s clearly a need to provide accurate monitoring for people working on those platforms.

Many people listening to music purely for entertainment want to hear a larger-than-life sound, while the studio engineer needs to hear exactly what is being recorded. Blue have managed to satisfy both camps by fitting a three-way rotary switch around the input socket so that the user can select from flat, bass boost or passive (Off) modes. When selecting bass boost mode (marked ‘On+’), the all-analogue filters provide a carefully judged level of low boost so as to create an impressively big sound but without the effect being overdone.

Inside the cups, the 50mm moving-coil drivers have fibre-reinforced diaphragms delivering a nominally flat frequency response from 15Hz to 20kHz. In passive mode the phones present a 42Ω impedance and in active mode the amplifiers go down to 10Hz. The signal-to-noise ratio is quoted at better than 105dB, or 20 microvolts, in active mode, and the amplifiers deliver 240mW of power with a distortion-plus-noise figure of 0.004 percent. Certainly I didn’t notice any noise when using them. 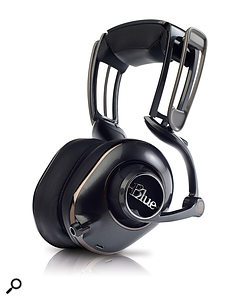 Physically stylish, the Mo-Fis constitute an impressive piece of engineering, with a sophisticated hinged and spring-loaded structure in place of the usual headband. The top section is generously padded, and a thumbwheel control allows the pressure on the ears to be adjusted to taste. The ear cups are fully enclosed, with Blue using what they describe as tuned damping to maintain a neutral sound. At 466g, these are not the lightest of headphones, but they are very well padded and ensure a good seal over the ears, which helps to exclude external noise.

Subdued amber LED lighting inside the centre sections of the phones indicates the charging status of the built-in battery (and blinks to show the battery is low), and a three- to four-hour charge provides around 12 hours of active listening. A neat touch is that the phones sense whether they are being worn or not and automatically switch off the power to conserve the battery life when you take them off.

Like many studio headphones, the Mo-Fis are connected via a removable rather than fixed cable (you get two of different lengths), which terminates in a very small jack at the phones end and a 3.5mm TRRS jack at the other, making it compatible with iOS devices that have a four-conductor socket. Adaptors are also included to accommodate quarter-inch jack and in-flight dual-socket connectors. A USB charger is included with the kit, along with a charging cable (the internal battery is Lithium ion and can be replaced by the service centre), though the phones can also be recharged from a USB socket on your computer.

As with loudspeakers, every headphone delivers its own unique version of ‘the truth’ but these stand up well against other respectable studio headphones, delivering a good tonal balance, more level than you’ll ever need and plenty of detail without sounding aggressive. The bass boost mode is also subtle enough to be pleasurable, but is best left switched off for serious monitoring work. Fully enclosed phones can often colour the bass end somewhat, but the damping used here keeps this to a bare minimum, and this is a more than acceptable trade-off considering the better-than-usual sonic isolation these phones provide.

Inevitably the inclusion of active circuitry and a battery adds to the weight, and even with the pressure adjustment dialled back to minimum I found the pressure on the ears more noticeable than with my usual studio headphones. Again, this is a trade-off against the benefit of good isolation, though after an hour or so working with the phones I was ready to take a few minutes off before resuming work.

If you only work in the studio and have good-quality headphone amps, then you may not feel the need to add the Mo-Fi phones to your collection, but for those working on mobile devices with very limited headphone power available, the argument is far more persuasive. The active approach is a very logical one given the migration to portable devices and it will be interesting to see what other innovations Blue have up their sleeves for the headphone market.

I haven’t had any experience of any other active headphones so can’t offer any alternatives.

A good solution for mobile use when the gear in question can’t deliver enough power to give good results with conventional passive headphones.