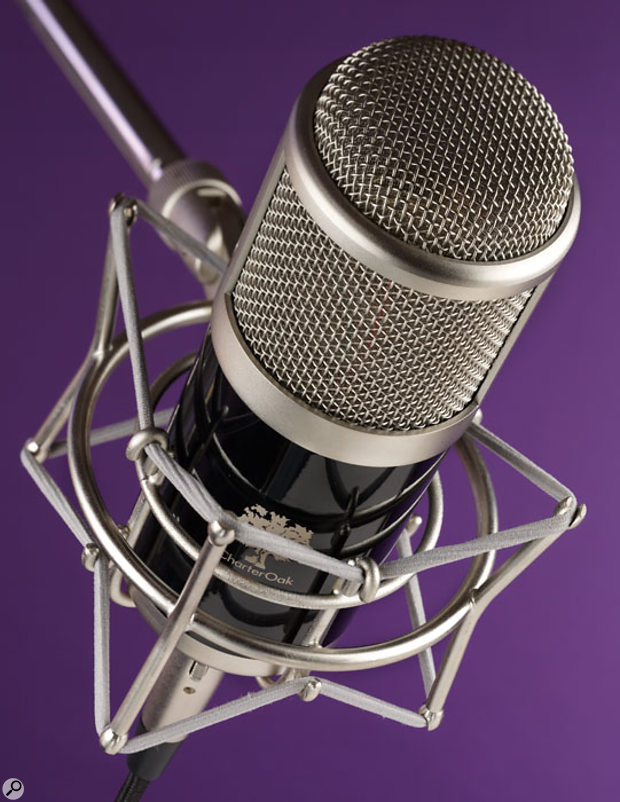 Can mics at this price really compete with the classics? Sound On Sound puts them to the test...

US-based Charter Oak have been in the microphone manufacturing business since 2002, making them a relative newcomer to the field, but they seem very serious about what they're doing. Essentially, they source capsules, components and other parts internationally from companies in China, Eastern Europe and Sweden, but do all the assembly and testing is back in Enfield, Connecticut, in the US. The design differs from many superficially similar competitors in that very high-quality electronic components are used, especially the capacitors. Although this makes little difference to the paper specification, the subjective sound is improved and it will also have a positive effect on reliability.

The SA538 and 538B are both multi-pattern tube mics based around a pair of pressure-gradient, 1.07-inch capsules with six-micron, gold-sputtered diaphragms (these are clearly different in each model, because the SA538 is edge-terminated while the SA538B is centre-terminated). This is a popular size and specification for Chinese capsules. If they are made elsewhere, I apologise for jumping to the wrong conclusion! Both mics look similar and have the same type of external power supply (PSU), which includes a nine-position pattern selector switch that goes from cardioid to figure-of-eight, via omni.

The PSU appears to be of Far Eastern design, and is a simple but robust folded-steel brick with IEC mains inlet, power switch and voltage selector switch. An included seven-pin, fabric-sheathed XLR cable connects the mic to the PSU, and from there a conventional balanced three-pin XLR accepts a standard mic cable (also included). Such differences as there are between the two mics manifest themselves in their technical performance — which I'll come to later — rather than in their physical presentation or feature set.

Both the SA538 and SA538B look like serious studio tools. They weigh around two pounds each, which means that you need a solid mic stand to keep them stable. An all-metal shockmount is included that seems very similar to the ones I've seen with certain Chinese microphones, but that doesn't detract from the fact that it is both robust and practical. This design incorporates a threaded, locking ring that locates onto the base of the mic so, once fitted to the shockmount, it is perfectly secure whether upright or inverted. Both mics, with their power supplies and all accessories, also come packed in aluminium camera cases fitted with combination locks.

Construction-wise, the microphones are conventional. But they are no less impressive for that, with a heavy machined basket support frame, a dual-layer mesh grille and a slide-on body cover finished in a vintage satin black reminiscent of some early European mics. An embossed silver Charter Oak logo marks the front of the mic, while a heavy, machined ring at the base of the mic holds the cover in place. Removal of the cover reveals neat construction, with plaited, PTFE-insulated cables connecting the capsule and main circuit board. The tube in both cases is a selected ECC83 dual triode, fitted to a ceramic base arranged so that the tube lies horizontally across the circuit board. None of the other components is visible, as they're all on the underside of the board. The board is shielded by an extension of the transformer housing, which in turn is joined to the basket assembly via four metal rods. There are no pad or roll-off switches on either model. 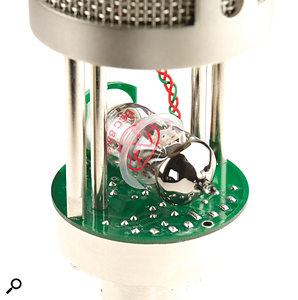 The ECC83 dual triode tube, used in both mics, is fitted to a ceramic base, with the tube fixed horizontally across the circuit board.

Individual frequency response plots are included, and these seem to be of the more honest 'warts and all' variety, rather than having heavily smoothed, and hence meaningless, curves. The response of the SA538 extends from 30Hz to 20kHz (-3dB points) and the cardioid curve is characterised by a flat mid-range, augmented by a fairly high-up presence hump in the 10kHz region. Off-axis, the mid-range dips as expected, producing a very happy smile curve! In figure-of-eight mode, there's a dip at around 6kHz but otherwise the response is nominally flat, while the omni mode shows barely a hint of presence peak. In both cardioid and omni mode, the response curve gets a bit bumpy below 300Hz or so, but that isn't unusual. With a self noise of 22dB, A-weighted, this isn't a particularly quiet mic, even for a tube model but, by the same token, the level of background noise isn't high enough to be an issue when close-miking vocals or instruments. For comparison, it is roughly comparable with the noise spec of a good vintage tube mic.

The slightly more costly SA538B has a marginally better noise spec, at 20dB A-weighted, and its lower frequency limit is 5Hz lower at 25Hz, although the maximum SPL is 125dB, rather than the 128dB of the SA538. Both mics have a 12mV/Pa sensitivity at 1kHz and a nominal 200Ω output impedance. Comparing frequency response plots shows that the SA538B has a little more height in the presence peak than the SA538, but otherwise the two microphones are broadly similar.

The Sound Of Oak

Before testing, I plugged in the mics and let them warm up for an hour, as recommended by the manufacturers. Though predominantly vocal mics, both models are equally at home on instruments such as acoustic guitar and percussion, with the SA538B having more presence. As I've found with pretty much all large-diaphragm mics, you have to work harder to find the best sweet spot for acoustic guitar than you do with small-diaphragm models, as these tend to be more forgiving for off-axis sounds, but you can get good results. In cardioid mode, the proximity effect is obviously present, but this isn't too pronounced under normal operating conditions and I got very acceptable results from a wide range of preamps, ranging from a cheap-as-chips Behringer desktop mixer to an SPL Gold Channel. Both models are on the bright side of neutral, though the SA538 has less of a presence peak, which makes it sound a little warmer and less edgy than the SA538B. I'm curious as to why Charter Oak found it necessary to create two such similar models, when a model somewhere in between the two could have been used with just a hint of EQ to cover the same territory. For my own vocals, I much preferred the SA538, as it gave more warmth and smoothed out the high end to some degree.

The character of both these mics definitely helps singers who need help with their upper-mid presence and projection (more so in the case of the SA538B), but who want to retain their low-end warmth without hearing that hyped-up, spongy low end that some modern tube mics dish out as a substitute for real warmth. Add a hint of compression and you can get a very refined, classic vocal sound from either of these mics without using much in the way of EQ or other processing. As expected, the omni mode isn't quite as open and natural sounding as from a small-diameter, single-diaphragm pressure capsule but it is still very usable and a nice option if you don't have a wide selection of mics in your locker. Similarly, the figure-of-eight pattern is valuable because of its excellent 90-degree rejection, which can really help separate sounds that are in close proximity. I used a number of tube and solid state mics for comparison, most admittedly a little less costly than the Charter Oak models, and in all cases the Charter Oak SA538 came across as both solid and present, cutting through a mix rather more assertively than most of the competition but without sounding edgy. The same is true of the SA538B, but I felt it had a less desirable balance of presence and warmth for my own applications, and could easily end up sounding too bright.

These are not the cheapest mics of their type around but, judged on their sound rather than their technical spec or the origin of the parts, they are probably worth the extra cost, as their sound compares favourably with high-end/classic mics costing a lot more, and they somehow help a vocal sit comfortably within a mix without getting buried or being too loud. In this regard, the use of higher quality electronic components certainly pays dividends. Just like the classics they are being pitched against, the noise figures are nothing special, but unless you're recording quieter sounds at a distance that shouldn't be a worry. Most of the time these models are likely to be used as close-up vocal mics, and in that role they are perfectly happy and even seem less prone to popping than the other models I tried for comparison — though you really should use a pop shield whenever recording close vocals.

There's a huge amount of competition in the low to mid-priced tube-mic market at the moment and you should also check out the other models in your price range, especially if the mic is mainly for one singer, as picking a mic with a character to complement a particular voice is something that can't be done by specifications alone. Other mics might be quieter, or capable of adding more character and leaving you with some change into the bargain, but these mics give you that little bit of extra class, and if you're looking for seriously good results in this price range you should definitely consider them.

There are a number of competitors in this category, and the differences are subjective. If you are considering the Charter Oak you might also want to look at mics like Rode's K2 or Classic, the Neumann TLM103, M-Audio's Sputnik, Sontronics' Helios, the Groove Tubes GT67, or the MXL V77S.

Both these mics are capable of great results on a wide range of vocalists, but my personal preference is for the slightly less costly SA538, as I feel it has a better balance of low-end warmth and high-end presence.