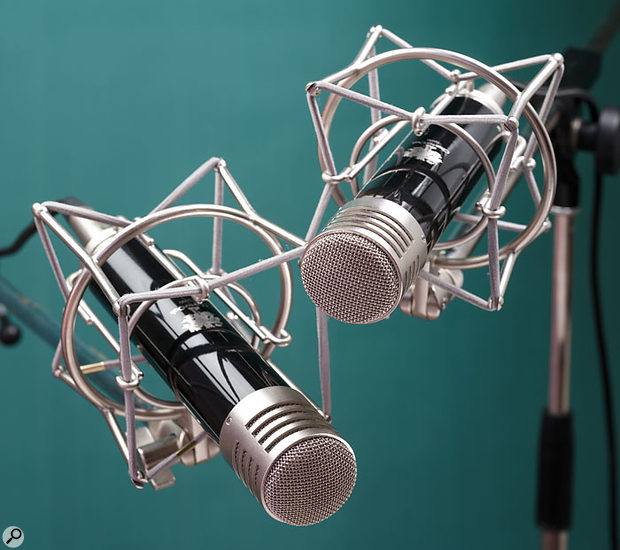 One of the key differences between the Charter Oak mics and their source Chinese designs lies in the choice and quality of electronic components — especially the selected valves and capacitors.

With good looks and a unique sonic character, there's plenty to commend these mics.

Charter Oak are relatively new microphone producers, having formed only five years ago, in 2002. The business is based upon sourcing component parts from around the world (mainly China), then hand-assembling them in Connecticut in the USA, and tailoring the complete system to provide a 'boutique' quality high-end sound. One of the key differences between the Charter Oak mics and their source Chinese designs lies in the choice and quality of electronic components — especially the selected valves and capacitors — which have a significant effect on the sound quality, even if they don't necessarily show in the technical specifications.

The S600 is a very chunky, end-fire, large-diaphragm, cardioid valve microphone, and is supplied only in matched stereo pairs, in a sturdy, lockable metal attaché case, complete with dual-channel power supply, cables, and a pair of shockmount cradles. The mic itself measures roughly 210mm in length and 40mm in diameter, and weighs about 590 grams, so this is a substantial item! Its body is finished in a highly polished piano-black, with anodised capsule grille and integral wire-mesh screen. At the base of the mic is a threaded XLR stem, which fits into the rotating collar of the shockmount. The seven-pin XLR connection accepts power from the supplied PSU, and provides the audio output through that unit in the usual way. Etched on the body is the mic's serial number, along with the Charter Oak logo, but there are no other facilities: no filter or pad switches, for example.

The capsule is a traditional one-inch, side-terminated design with a Mylar diaphragm, sputtered with a six-micron layer of gold. A frequency response of 18Hz to 20kHz is quoted, but no limits are given. The frequency response charts supplied with the mics show a pretty flat response, but not as flat as the generic trace published on the company's web site. They were both within a couple of dB from 60Hz to 7kHz, with a modest resonant peak at about 9kHz, above which the level falls off gracefully. The matching of the two mics is very close indeed, with only a minor discrepancy around 5kHz on the review models, so there are no problems there. The mic has a pronounced proximity effect if used closer than about six inches.

Sensitivity is given as 13mV/Pa, which is quite healthy, but the self noise is a surprisingly high 22dB A-weighted. For comparison, the Neumann M147 cardioid valve mic has a self-noise of 12dBA. Maximum SPL for the S600 is 125dB for 0.5 percent distortion, which means that it will cope with most musical sources, even with close placement.

Unusually for a large-diaphragm mic, the S600 is an end-fire design: you have to point it at the source, instead of facing the side to the source like a U87 or C414. This looks very odd when mounted in the traditionally designed, elasticated shockmount — although it seems to work well enough. This is an American-built mic, and the stand adaptor with the review models had a 5/8-inch thread; no 3/8-inch European adaptors were supplied. The knuckle joint is tightened with a large butterfly bolt, which proved able to tighten securely and release easily during testing.

The power supply is a large, black, metal brick, with IEC mains inlet, illuminated power switch and voltage selector on one end, and two pairs of mic-in and signal-out XLRs at the other.

The S600 sounds like a hand-tailored large-diaphragm mic. It quite definitely has a character, which is slightly warm and quite rich, despite the apparently flat frequency response. Presumably this character is the result of a combination of subtle capsule, valve and custom output-transformer distortions. The gently falling high end gives it a fairly smooth sound too, without any trace of resonant brightness or sibilance on most vocalists.

Charter Oak suggest using S600s as overhead pairs on drum kits, and I can see the sense in that, particularly for rock drum kits where a little extra character and shimmery cymbals would be useful. Another suggested application is for electric guitars and bass guitars, building on the mic's solid low end and smooth, resonance-free treble.

I tried the mic on a couple of different electric guitar/amp combinations and found it did indeed work very well, capturing the required sound in a pleasing, musical way, with plenty of detail but without harshness. A lot of capacitor mics can sound rather brittle on electric guitars, but not so the S600. The proximity effect doesn't really come into play until you get within about six inches of the source, as mentioned earlier, but close miking can certainly be used to take advantage of the additional warmth and body that results.

As a vocal mic, I was a little less impressed with the S600. The relatively high self-noise was more of an issue for me in this role, especially with delicate vocals. I was able to use a recently acquired AEA mic preamp to raise the S600's output to line level, which yielded decent enough results. This preamp design was intended for ribbon mics, but works well with valve mics too, and is extremely quiet. Using more standard-fare mic preamps (Mackie VLZ Pro, Focusrite ISA428) revealed slightly higher noise — not so much as to make the mic unusable in any way, though personally I think I'd stick to using the S600 as an instrument mic, rather than for vocalists or as distant mics.

At around £1400 for a stereo pair, these are fairly expensive mics — and if you're only looking for a single mic, this sort of money will open the doors to a wide range of very respectable and high-quality models, both solid state and valve. There are also more versatile mics that might be a more appropriate starting point for a collection. However, the sonic quality and character of the S600s will justify the cost for many and they would certainly enhance an already well-stocked mic cupboard. The kit of parts is also nicely fitted out, with the cables, shockmounts, mics and power supply all in a solid, professional-looking case.

Finally, they are also, without question, things of beauty, which will generate interest and comment: not least the inevitable questions about whether you are pointing them in the right direction!

The most directly comparable microphones to the S600, in terms of facilities and cost, are probably the AKG Solidtube and the SE Electronics Gemini MkII. However, there is a vast array of tube microphones around across all budget ranges. To better the S600, though, aesthetically as well as technically, you will probably have to look at spending a similar amount for a single microphone, instead of a pair.

An unusual end-fire tube-mic design with a well-extended response, a smooth, flattering top end and plenty of character.