Behringer describe the iAxe393 as a high-quality electric guitar with built-in USB audio connection, the idea being that having an integral USB interface allows you to record directly into your Mac or PC, or to use real-time software guitar processing, without the added expense of a dedicated audio interface. Because most computers are easiest to set up using a single device to handle both the audio input and output, the guitar also includes a quarter-inch stereo headphone out jack for monitoring purposes.

Bundled with the guitar is a 30-day stand-alone demo version of the Native Instruments Guitar Combos software package, which models three classic amplifiers. It also includes a virtual tape machine for playing back loops or audio files, so you can use it as something to jam along to. Normally a 30-day demo wouldn't be that thrilling, but the good news here is that when your time is up, you can have one of the three amp models free for keeps by registering at the NI web site using the info that comes with the iAxe393. In addition to being able to play along with MP3, WAV, AIFF and OGG (an alternative compression format to MP3) audio files, the install CD also includes Audacity, a multitrack recording and editing program so, if you're new to recording, you'll be able to find your way in gently.

Behringer make some great claims for the quality of the guitar and, to be fair, given its low price it isn't a bad instrument, but if the one we received was anything to go by, it will benefit from being set up by somebody who knows what they are doing. The neck wasn't seated squarely in its pocket and the action was far higher than necessary, though the nut was reasonably well cut and the neck relief was about right. As you'd expect from the five-way switching and the familiar three single-coil pickup arrangement, the iAxe393 sounds not unlike one of the budget Fender Squier Stratocasters, though the general styling sits somewhere between a Strat and a Yamaha Pacifica. As with a Strat, the middle pickup is reverse-wound and has reversed magnets so that when the 'two pickup' positions are selected, the pickups work together as a humbucker and cancel out the majority of electromagnetic interference. When individual pickups are selected, you can get hum and buzz if you're too close to your amplifier or to other electronic equipment, especially light dimmers, but this instrument is no worse than any other single-coil model in that respect.

The neck is made from either maple or some far-eastern equivalent, and is fitted with narrow, shallow frets that have an early Fender vibe to them, though I prefer something a bit meatier myself. The fingerboard radius is fairly flat at around 12 inches or so, which helps prevent string choking when bending on the higher frets, and after a bit of a setup it would feel quite comfortable to play. There's nothing special about the machine heads, which are fully enclosed, low-cost models, but they work well enough. Two string trees keep the top four strings pushed down into the nut and, to prevent tuning problems, it is best to lubricate the underside of these with vaseline or a chap stick, especially if you plan to get medieval with the tremolo unit. It doesn't hurt to lubricate the nut slots either, with a little vaseline mixed with powdered graphite (pencil lead will do).

At the tremolo end, we have a traditional fulcrum unit fixed to the body via six woodscrews in the time-honoured fashion, and the back-tension is provided by springs in the rear body cavity, the tension of which can be adjusted by moving the spring anchor claw. Depending on how you tighten the screws, you can either have the trem flat against the body to give pitching down only, or you can float it just above the body for two-way pitch acrobatics. The individual cast saddles are adjusted using a pair of grub screws to tweak the height and a single, cross-head screw to set the intonation. Suitable Allen keys are included. The tremolo arm screws in, so if it works loose you can always wrap some PTFE tape around it. 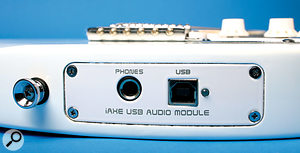 As well as the normal guitar jack socket (on the front) the iAxe includes a USB port and headphone output for monitoring the signal from your computer.As far as I can see, the control arrangement is much the same as you'd expect on a Fender Stratocaster, with a five-way switch offering a choice of any single pickup or any adjacent pair. There's an overall volume control and two tone controls (one for the neck and one for the bridge pickup) with a conventional analogue output via a quarter-inch jack. The USB connection and headphone jack are mounted on a plate at the end of the guitar body just below the strap peg, and a blue LED shows when the unit is active. Power comes from the USB socket to which the instrument is connected, so you don't need batteries or a PSU.

My first test was to run the guitar into Apple's Logic Express, which worked fine as the guitar showed up as a generic USB audio device requiring no additional driver. If you hit the strings as hard as possible, the recording level peaks at around -3dB, so it seems the engineers have got the gain structure just about spot on. The audio quality of the USB input seems fine, though it can get a little gritty when you apply lots of overdrive.

I also installed Native Instruments' Combos and had fun playing with those as they include some guitar-style effects as well as just amp simulations. Though no names are mentioned, the sounds of the three amps lean towards Vox, Marshall and Fender, at least to my ears, and though purists may never be happy with software amp-modelling, you can get some really good sounds out of these emulations. As you can try all three for up to 30 days, you'll be able to make your mind up as to which one you want to keep when you come to register. The manual states that if you have Mac OS 10.4 and above, you should select the Behringer USB driver rather than the generic USB audio device, but I tried the software on two different Macs (iBook and Macbook Pro) running OS 10.4.8 and 10.4.9 respectively, and nowhere did a Behringer driver appear as a choice. On my Macs, for some reason, I had to create an aggregate device to be able to monitor what I was doing, as the inputs and outputs seemed to be recognised as two different devices, but it worked well enough.

At such an attractive price (£109 including VAT), the iAxe393 offers good value, but you should expect to spend a little time tweaking the action, as the setup leaves much to be desired. It works fine as a standard electric guitar, but plug in the USB cable and you have yourself a nice little recording, jamming and practice setup. Don't get too animated, though, as the supplied USB lead is only around four feet long, which is a little restrictive. The pack also includes a strap and a couple of picks, as well as a chord chart, so even beginners will be able to have fun with it right away.

This is a good entry-level package, which can turn any current Mac or PC into a guitar recording studio or virtual guitar amp. Though quite basic it is very playable after being set up, and it has a very plausible 'classic' single-coil sound. The bundled Native Instruments software is very flexible, and even the single amp model you retain after the demo expires can cover a lot of tonal ground. Paul White 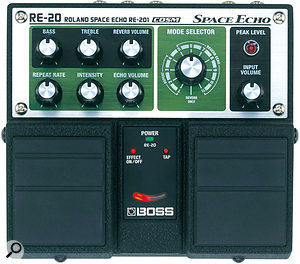 Roland and Boss have made the RE201 Space Echo available in stomp-box form. The RE20 is the latest in Boss's Twin Pedal range. Roland and Boss say they've recreated every sonic detail and nuance of the original, including its spacious, analogue tone, tape flutter and magnetic tape saturation. The pedal also adds features such as a tap input pedal, which allows delay time to be set by foot, a longer maximum delay time, and an expression pedal input to control parameters like repeat rate and intensity. Available in June at £152, it sounds like a must-have on your pedal board, and we'll be reviewing it as soon as we get our hands on one.

Digitech offer one of the biggest ranges of modelling processors for guitar, covering generic amp and speaker modelling, effect modelling and even targeting the sound of specific artists. The Digitech CF7 Chorus Factory is a stomp-format digital pedal, designed to recreate the sounds of seven different chorus pedals, from the relatively ancient to the very modern. It can work in mono, but offers stereo outputs. It runs from either a 9V battery or an optional mains adaptor. The chip at the heart of the unit is Digitech's Audio DNA2. Its Flexible Output Mode incorporates cabinet emulation, which is useful when recording without an amplifier. Emulation is off by default but can be activated by powering up the pedal with the footswitch depressed. 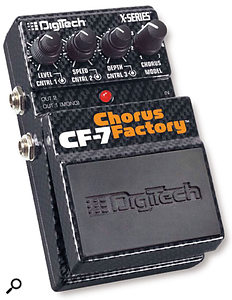 The pedal is solidly built, with the battery beneath the pedal bypass switch. There are two sprung pins that can be pressed to release the pedal for battery changing. There's a mono input jack, which also activates the battery, and two output jacks so you can take a mono or stereo output. Of the four control knobs, three have dual concentric controls, so you have access to six variable parameters including level, as well as a seven model types. The models are based on Digitech's Multi Chorus, Voodoo Lab's Analogue Chorus, TC Electronic's Stereo Chorus Flanger, Fulltone's Choralflange, Boss's CH1 Super Chorus, Electroharmonix's Small Clone, and the Boss CE5 Chorus Ensemble (the other companies mentioned do not endorse this product and their trademarks remain their own).

The authenticity of the models is subjectively very close, at least for the chorus pedals I've previously owned, and though there is a little audible background hiss, this is less than from many of the analogue pedals modelled here: I recall my original Clone Theory pedal (I used two to get a stereo effect) as sounding fantastic but horrendously noisy!

Having some models that can extend into flanging is a useful bonus, as being restricted only to chorus sounds is somewhat limiting. If I'd had a choice, I'd have liked to see a mixture of chorus, flange and maybe a Univibe, rotary speaker or phaser to fill out the range. As it is, the chorus units sound very much like the originals but my guess is that most people will find the one that suits them best, then stick to that one — I don't imagine tweaking those dual-concentric knobs on stage would be very practical anyway.

The battery life is about four hours, which is understandable given the circuitry used, so a power supply would be a good investment. Other than that, the Chorus Factory is a very solidly engineered pedal that does exactly what it claims, emulating some of the best respected chorus pedals out there. At £99, and with a 'buy-two-get-one-free' offer on Digitech's X-series pedals at the moment, it represents good value.

The Digitech CF7 Chorus Factory does exactly what it sets out to do and it does it well — though whether you need a choice of so many different chorus units is down to the individual. Paul White