Building in China, then disassembling in the US and replacing parts seems a long-winded way to go about building a mic... but there might just be some sense in the approach. 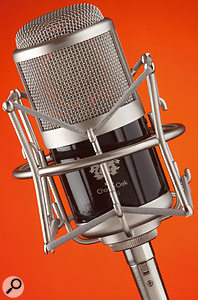 Photo: Mike CameronCharter Oak were founded in 2002 by engineer Michael Deming, who is currently operating his business from Enfield, Connecticut. His microphones are built to his specification in China, but he disassembles them in the US, changes some of the parts, rebuilds each one and checks each mic's performance.

During development, Deming beta-tests his designs with the help of industry professionals, to ensure that he's producing something that will deliver in real-world situations — and while this approach means that they're priced higher than the majority of generic Chinese mics, they still sell for rather less than a traditional European microphone.

A number of people have discovered worthwhile upgrades and tweaks for imported microphones, so making these the basis for an 'improved' product range with a recognisable name makes a lot of sense, and seems to have paid off because the name Charter Oak has won a lot of respect over the past few years.

The Charter Oak E700 is a multi-pattern FET capacitor microphone with a capsule based around a pair of 1.22-inch, centre-terminated, gold-sputtered Mylar diaphragms. The internal preamp electronics are pure Class A, as one should expect for mic preamps (in fact, it would be more of a novelty if the circuitry wasn't Class A!). Apparently, this particular model now incorporates a US-built output transformer and the internal wiring uses PTFE-coated wire because of its high insulation characteristics. Small slide-switches on opposite sides of the microphone body are used to select the pickup pattern (omni, cardioid or figure-of-eight) and one of three pad settings (0dB, -10dB and -20dB). The mic I tested was serial number 0016 but I understand that after serial number 0040, Charter Oak replaced the pad and pattern switches with three-way miniature toggle switches. All the circuitry is accommodated on glass-fibre circuit boards, and the stock polystyrene and polypropylene capacitors have been replaced by premium brands such as WEMA.

Mechanically, the mic isn't dissimilar to many other Chinese models, and that extends to the shockmount and metal case that come with it, but there's nothing wrong with that — they're all solidly engineered and functional. Cosmetically, the mic looks very businesslike, with its slightly squat shape and its glossy, black-finished brass body with the distinctive Charter Oak logo. The familiar, heavy locking ring secures the mic body 'sleeve' in place and the output is on a standard three-pin XLR, which also supplies 48 Volt phantom power.

One factor that may influence your purchasing decision is that this mic has a lifetime warranty on all parts and labour. The technical spec is pretty good too, with a 25Hz to 20kHz frequency response, and a sensitivity of 16mV/Pa (94dB=1V/Pa@1kHz). The Equivalent Input Noise is 17dB A-weighted, which is not exceptional but is typical of this type of microphone, and in normal applications circuit noise is not an issue. The maximum Sound Pressure Level is 125dB for 0.5 percent total harmonic distortion at 1000Hz, and although there are mics on the market that can take more level, I've seen reports on various forums that this mic delivers excellent results when used to record kick-drum, and it doesn't get much louder than that!

As a vocal mic, the E700 has a definite character that flatters the sound of most singers by adding a sense of density, warmth and air, but without becoming too brittle at the high end. Some users have likened it to a warmer, less toppy-sounding AKG C414, which may be true to some extent, but then I've never actually owned a C414 so that isn't a comparison I feel that I can make with any degree of accuracy. What I would say is that the E700 is on the flattering side of neutral, although not so flattering as to be obvious. In comparison with the SE 2200A, a popular and attractively priced mic (typically costing about a third of the price of an E700) with which many readers will be familiar, the E700 has a rather more open sound on vocals, tending more towards the natural character of an omnidirectional model (even when set to cardioid mode), but at the same time it has a smoother high end and more apparent low end.

The figure-of-eight pattern sounds very similar to the cardioid, but switching to the omni pattern delivers a very different result, because, of course, there's no proximity bass boost with omnidirectional mics, and all that warmth that was generated from working up close just falls away. Once you've mentally adjusted for this, the omni pattern delivers pretty much what you'd expect, and although a dual-capsule, large-diaphragm mic is never going to be as accurate as a dedicated small-diaphragm, single-capsule omni, the omni pattern nevertheless does the job pretty well — and it certainly extends the versatility of the mic.

The E700 is also a very accomplished acoustic-guitar microphone in any of its pattern modes, although (as always) you do have to search for the sweet spot. The results I achieved varied from somewhat brash and over-assertive to smooth and silky, depending on where I put the mic. Hand percussion also came over solidly, and with plenty of depth, so the manufacturers' description of this mic as an all-rounder that's primarily intended for vocals is accurate.

Judging by the tonality of the E700, I would say that it should work with a wide spectrum of voice types, as long as users position the mic to achieve the best tone, rather than relying on equalisation afterwards. It is probably best suited to singers who feel their voice sounds a bit thin or congested when using other cardioid-pattern capacitor mics, but its top end, which manages to be both smooth and airy, also works in its favour.

Although there's plenty of very strong competition for this sort of microphone at this price, the Charter Oak E700 is versatile and classy. It is well suited to vocals but also gives good results on a wide range of instruments. What's more, it offers great performance for its price and is certainly worth auditioning if you're looking for a studio workhorse.

There are plenty of mics competing in the same market area as the E700, and, as always, you should try to audition them if you plan to use the mic mainly with one vocalist, because everyone tends to suit a different mic. Some alternatives you might try are the Audio-Technica AT4050, SE Electronics' 3300A, the Neumann TLM103 and the Rode NT2000.

The E700 is a mid-priced microphone that delivers good general-purpose results, as well as being a solid-sounding vocal performer. It flatters at both the high and low end, but not so much as to make it obviously coloured-sounding.