A viewfinder is great for framing shots without setting up your camera — so having one as an App is even more convenient. 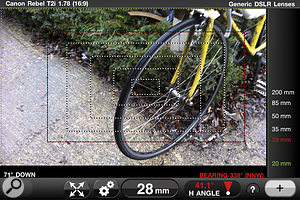 A common sight on film sets is the director peering down what looks like a telescope. Unfortunately, it's not a latterday pirate accessory, but a way of checking the framing of shots with particular lenses: it's called a 'director's viewfinder'. Noting the rising popularity of both film-making and camera-equipped iOS devices, software developers Chemical Wedding have created Artemis Director's Viewfinder, an App designed to simulate the viewpoint of a great number of different cameras and lenses. Now at version 4.2, and regularly updated with tweaks and features, it's a pretty solid tool with room to grow.

The purpose of the App, and, indeed, physical viewfinders, is to check how the shot will frame when using your particular camera and lens before setting up the scene. This is especially useful when using cameras with interchangeable prime lenses (lenses that do not zoom in or out) and when scouting for good locations, where travelling with all your kit is laborious and attracts a lot of attention. In the former case, especially, changing lenses over and over in order to see a different view is a lot of hassle.

Most of Artemis 4.2's opening screen shows the view from your iPhone (or iPod touch) camera, using automatic focus and exposure. The top-left corner displays the currently selected camera model and the top right the current lens selection.

Before going any further, it's best to define your camera. Touching the top left of the screen displays a list. Cameras are categorised first by film or sensor type and then by specific models and categories. Selecting 35mm film, for example (for those who have the privilege of using the medium), brings up a list of seven variations. On the digital front, everything from the ageing Sony HVRZ1 HDV camcorder to cinema cameras such as the Red One and Arri Alexa is present. Whether you're working with a small‑chip camcorder or a Canon DSLR, you'll find something close to yours on the list. If your specific model isn't there, just check its specifications for a sensor size, and choose 'Generic'. 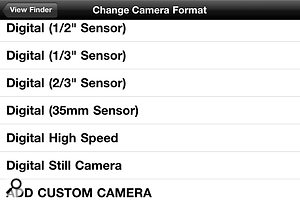 The lens selection list, or 'lens bag', allows you to choose the focal lengths you'd like to preview.For my camera, I selected Digital Still Camera, Canon Rebel T2i (known as the 550D here in the UK), and the aspect ratio 1.78 (16:9). After this, I was presented with lens selections. Some common types are listed, and for the T2i they were Canon EF, Zeiss SLR and Generic DSLR. Since I have quite a ragtag collection of glass, I chose Generic, which allowed me to pick from a long list of focal lengths. 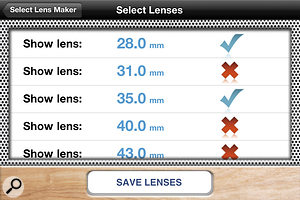 There are plenty of sensor and film options, encompassing most popular cameras.These focal lengths are displayed on the main screen as dotted outlines, and you can use the plus and minus symbols to highlight each in turn. Pressing the four arrows will blow this portion up to full screen, where you can press the camera symbol to take a snapshot. If the focal length falls outside the view range of the iPhone camera (too wide), the screen will be filled with arrows showing an estimated framing. 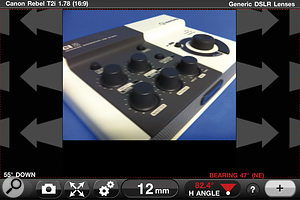 When a focal length is too wide for the iPhone camera, the App resizes the preview to show how much bigger the frame will be.

A snapshot will store GPS data as well as heading and elevation data, so you can effectively revisit the exact spot and recreate the exact shot later, with your chosen camera. You can change the metadata displayed with a snapshot by using the settings menu, accessed via the small cog icon, which also allows a few other operations, such as image saving and broadcast to iPad. This last option allows the view to be transmitted live to the Artemis Remote App on a nearby iPad, for viewing by a director — useful if you have plenty of iOS-equipped friends to help out on your music video!

Above these controls are displays of your bearing (the compass direction you're facing in) and angle of elevation. The 'angle of view' box can be tapped to change the measurement from horizontal to vertical and vice versa, telling you just how much of the world the selected lens and camera combination will take in. 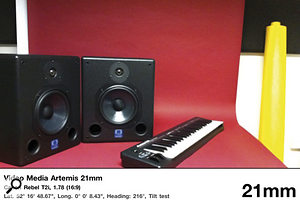 Whether or not you'll find a viewfinder App, or even a traditional viewfinder, useful will depend on the kind of work you do, and the way you do it. I primarily shoot music videos and narrative pieces using a combination of DSLR, hybrid camera (still cameras that shoot video) and Sony EX1 camcorder, with the selection depending on the shot and intention. Because of this, having a way to simulate the framing of a lot of focal lengths and sensor sizes in my pocket is great. The framing accuracy is excellent, and it certainly saves me carrying a bag of lenses and switching them incessantly to frame up with the Canon, then firing up the Sony EX1 for some wide and active shots.

Compared to a traditional viewfinder there are limits to the Director's Viewfinder App. Since the zoom is digital and inherently fuzzy, you won't be able to get an idea of sharp composition at long focal lengths. The wide end of the focal‑length scale is also limited by the actual field of view of the iPhone lens, and, as of version 4.2, Artemis is yet to support wide-angle adaptors, such as the Owle Bubo mount for iPhone.

I'd love to see a 'Zoom' selection under lenses, especially for camcorders like the Z1, where listing prime lenses doesn't match up with reality, since the lens is fixed. Such a setting could use a slider at the side of the screen allowing you to set the shot to your taste, with Artemis telling you the focal length in millimetres. Also, a way to A/B flip between two presets of cameras and lenses would be great: as it is, you need menus to change the settings each time.

Artemis is primarily useful for sketching out your shots for storyboard, scouting a location, or checking before you switch lenses or cameras for a shot. Recently, I began to put some Artemis snapshots together in another iOS App — Cinimek Storyboard — which works well in conjunction with Artemis, allowing ideas to take shape without leaving iOS.

If I want very close approximations of what I'll achieve with the DSLR, I'll head out with that camera itself and a cheap kit lens, but this doesn't have much versatility when it comes to showing me how things will frame with a camcorder, and I don't always have that with me, unlike my phone. Consequently, after having Artemis around for a good few months now, I've found it a useful tool for saving time, learning the limitations of different gear, and saving my back the strain of too much carrying.

An iOS alternative is Dire Studio Viewfinder Cine (£12.99$21.99) which has a similar feature set, but including support for the Owle Bubo wide‑angle adaptor. The hardware alternative is a traditional director's viewfinder. These are relatively expensive affairs, with those costing around £150$175 to £200$250 showing a quite distorted and soft image that appears smaller as you zoom in. More expensive viewfinders are of higher quality, but it could be argued that using a still camera with a zoom lens and similar-sized sensor to your main camera (or, if it's small enough, your camera itself) is a more economical choice for those working outside big‑budget production.

For those who also own an iPad, a second iOS app, Artemis Remote, can be linked to the phone in order to display the camera view in realtime. It's something of a decadent feature from the point of view of your average shooter, but for those who have both devices and are thinking of crewing up for a job, it'll let you lounge about in a nice chair while you send your crew (or tolerant friends) off to find shots!

Artemis Vs The Real Thing 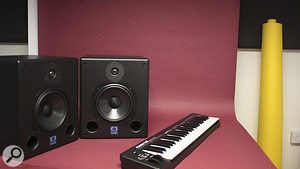 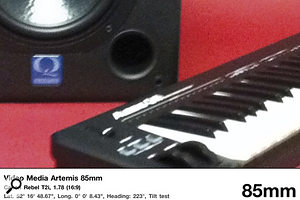 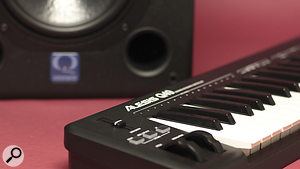 Here, I've taken a couple of shots showing photos from Artemis and from the Canon 550DRebel T2i, with the low-resolution Artemis previews on the left and the Canon shots to the right. They aren't scientific tests shot from precisely the same point (I didn't have a tripod mount for the iPhone at the time), but you can see that the framing estimation is pretty accurate, especially considering that I was using the 'Generic' lens selection in Artemis.

Since iOS cameras have a tiny sensor and limited resolution for cropping, they can't emulate the depth of field displayed by lenses at various apertures and sensor sizes. Nor can they give you a measurement of the minimum focus distance for a lens, since this is quite specific to each model at a given focal length. Despite all of this, the software frames accurately, which is the primary purpose of a viewfinder, and is plenty good enough for knocking together a basic storyboard without a big bag of camera equipment.

If you're shooting video and you own an iPhone already, a single App like this could save you a lot of hassle swapping lenses and gear, and carrying equipment for location scouting. Though the snapshots at longer focal lengths are pretty fuzzy, they serve their purpose, letting you frame shots before shooting. Whether you find it useful will depend on how you work, but considering that my iPhone is always in my pocket, I'd rather be with such an App than without it.