Swedish bass‑equipment manufacturers EBS's updated MultiComp pedal is intended to make transparent‑sounding bass compression easy to achieve. Although essentially a simple compressor stomp‑box, this box offers a couple of interesting features. The first is a dual‑band compressor mode, and the second the ability to be powered via the input jack from a 9V phantom supply, which the bass amps made by EBS and a few other companies provide, leaving you with no need for batteries or an external supply. The model supplied for review is an update on an earlier version, the main changes being an increase of 3dB in headroom and true bypass switching. 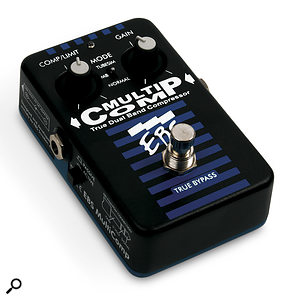 The first thing that struck me about this product was the build quality: the construction is neat, the knobs and switches don't have that all‑too‑common feel of fragility, and the painted metal case is solid and weighty enough that it stays put when stomping, even when not Velcro'd down — something that's aided by the non‑slip foam attached to the underside.

But what of operation and sound of the compression itself? The controls are simple: as well as the metal on/bypass pedal, there's a comp/limit dial, which sets the ratio; there's a make‑up gain dial; and there's a switch between these two knobs to select which of the three modes of operation you wish to use.

The first mode, 'Normal', gives you simple, one‑band compression; the second, 'MB' is the dual‑band option, which sets this pedal apart from most, and the third, 'Tubesim' is essentially the normal mode but with added harmonics, to create a subtle valve‑like effect. There's no input level — you'll need to rely on your bass's volume control for that, or the output level from any preceding pedals.

There's neither an attack nor a release control, which in my view is a shame, although it would arguably have added to cost and made operation that little bit more complex. There's also no user‑adjustable threshold on the outside of the box — but opening up the metal case reveals two trim‑pots, which allow you to adjust the threshold of the low and high bands of the MB mode independently. This really adds to the versatility of the pedal, but I thought it a shame that these controls aren't accessible without opening the case, as knobs or recessed trim‑pots, for example.

The simple compressor mode did what I'd expect. It acted swiftly enough to pin down wayward twangs and added a nice thickness to the bass. At Comp/Limit settings lower than 12 o'clock, this was a nice effect, but as I increased the ratio further, it was easy to hear the release working in a rather obtrusive way.

To get a more natural sound, you simply flick the switch to MB mode. Any higher‑frequency picking, string‑twanging, thumb‑slapping or plectrum‑clacking gets firmly nailed in place without affecting the warmer bass and low‑mid frequencies. The result is a well‑controlled, rich and natural sound.

The Tubesim setting does what EBS claim, and although subtle (as they should be) the harmonics are perfectly audible. Indeed, it is a pleasing sound, but I was left frustrated that I couldn't combine the Tubesim and MB modes, which would have increased the pedal's appeal.

EBS may specialise in bass, but as there's ostensibly nothing bass‑specific about a compressor, I thought I'd give the MultiComp a spin on electric guitar as well — and a very nice job it did, too. In fact, so nice was it, that if you're looking for a guitar compressor pedal I'd definitely recommend trying it out.

All in all, then, The MultiComp is a very useful, transparent‑sounding bass compressor pedal, particularly in the dual‑band mode. While I have a couple of very minor criticisms, I wouldn't hesitate to use it on stage in front of an amp, or as a front‑end bass compressor when tracking to my DAW. Matt Houghton