With so many mastering processors already on the market, is there room for another compressor, EQ and limiter? Fabfilter certainly think so... 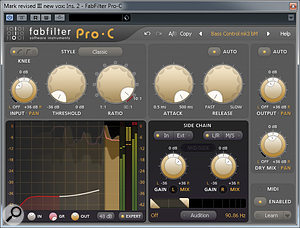 Although there have been some innovations in recent years, mix bus and master processing still has the Holy Trinity of compression, equalisation and peak limiting at its core. And at first glance, Fabfilter's take on this triumvurate looks pretty traditional, consisting, as it does, of a stereo compressor, a parametric EQ and a single‑band, brick‑wall limiter. Dig beneath the surface, however, and it becomes clear that much thought has gone into the design of Pro‑C, Pro‑Q and Pro‑L.

This is most immediately apparent in the beautifully slick interface, many features of which are shared across all three plug‑ins. All of them look great, and do a good job of displaying the information you need to see in a meaningful yet compact fashion. The Pro‑C compressor and Pro‑L limiter, for instance, feature not only conventional gain‑reduction, input and output meters, but a scrolling histogram that allows you to visualise these parameters over time. There are genuinely helpful tooltips associated with all the controls, a well thought‑out and clear interactive help guide, and each plug‑in maintains an Undo history that allows you to retrace your steps when you go wrong. Many developers try to give their plug‑ins an air of class by making them look like pieces of vintage hardware; these, by contrast, are plug‑ins that embody the principles of good software design, and they are all the better for it.

All three are available as separate plug‑ins, and have to be downloaded separately even if you buy the full Mastering Pack, but a single authorisation covers the entire bundle. This consists of a string of gibberish that is emailed to you once you enter your licence key, and is pasted into the activation window the first time you run one of the plug‑ins. All the common plug‑in standards are supported, and the VST version installs separate VST2.4 and VST3 versions, the latter offering some additional features such as external side‑chain support, if your host can accommodate them.

On first loading up the Pro‑C compressor, you could be forgiven for thinking "Well, it looks nice, but basically it's just a bog‑standard compressor, isn't it?” It takes a few minutes' exploration to realise that it is no such thing. For a start, three different styles of compression are available: Clean is comparatively transparent, while Classic is more aggressive, and Opto is warmer. The release characteristics of all three are programme‑dependent to a certain extent, and the Release time control can be switched to a fully programme‑dependent mode where it simply runs between Fast and Slow rather than offering measured times.

As well as an output gain control, there's also a Dry Mix dial that allows you to reintroduce some of the dry signal, for parallel compression, and one of my few criticisms of Fabfilter's interface centres on these two gain controls. The Dry Mix is independent of the main gain control, so adding the dry mix back in makes the output louder, so it's hard to meaningfully A/B the sound with and without a dry contribution. More seriously, the gain range of both controls is huge, and it's too easy to accidentally drag one all the way round to its maximum +36dB(!) setting with a slip of the mouse. Clicking in the centre of the control lets you use it in a slightly less lethal 'vertical' mode, but even so, I would like to see a way to scale down the gain range to protect speakers. Fabfilter say they are aware of this issue, so it may be changed in a future version.

Most of Pro‑C's special features are accessed by clicking on the Expert button, which slides open an extra panel to reveal additional controls. You can then use 48dB/octave high‑pass and low‑pass filters to shape the side‑chain signal, and also change the way it handles stereo information. By default, Pro‑C does what most stereo compressors do: it sums the left and right channels to generate a mono side‑chain, so that gain reduction is applied equally to both channels. However, in Expert mode you can progressively de‑link this summing, so that compression becomes less and less correlated between the two channels. Alternatively, you can switch Pro‑C into M/S mode and independently compress the Mid and Sides channels, which makes possible various neat stereo-width enhancements.

In short, if there's something you want to do with a compressor, the chances are you can do it with Pro‑C. The three modes cover much of the sonic ground you'd expect from a mastering compressor, and do so very well. Unusually for such a plug‑in, it also comes with a library of presets that are both usable straight away and very helpful for understanding its possibilities. I was particularly taken by the 'Bass Control' presets, which use a very heavily filtered side‑chain and massive compression to squash the low end of a mix, then blend it back in with the dry signal. The results are surprisingly transparent, and very effective at taming an uneven low end, something I would normally expect to have to use a multi‑band processor to do.

Load up the Pro‑Q equaliser, and all you see at first is a flat line running across the window. This, however, is the basis of one of the nicest EQ interfaces I've seen. Hover the mouse over the line, and a circular blob will appear; click this and drag it up or down, and you've created a band of EQ. This can be further adjusted by Ctrl‑dragging to make it wider or narrower, Shift‑dragging for fine adjustment, and Alt‑dragging to adjust gain without changing frequency, while right‑clicking lets you switch it between bell, shelving or filtering modes. EQ parameters can also be adjusted using the dials that appear beneath the display. Up to 24 EQ bands can be created, and individual bands can be bypassed or set to operate only on one channel of the stereo signal. This is probably most useful in the M/S mode, where you could, for instance, cut low frequencies from the Sides channel to make a track easier to cut to vinyl. Once again, the graphic display is a model of clarity, showing not only the shape of each individual band but the composite curve to which they all contribute. This can, if you wish, be overlaid on a real‑time spectrum analysis of either the pre‑ or post‑processed signal, while the scale of the graph can be set to show plus or minus 6, 12 or 30dB.

Pro‑Q can be set to operate either in zero‑latency mode or in a variety of linear‑phase modes, which, as always, impose some processing delay. In the linear‑phase modes in particular, this is a beautifully smooth EQ, which is perfect for its intended application in mastering. Even when adding large amounts of 1kHz to a mix I'd done, it was difficult to make things sound harsh, and, likewise, high shelving boosts just seem to add clarity and definition without making the mix fatiguing or crunchy. Excellent.

To L And Back 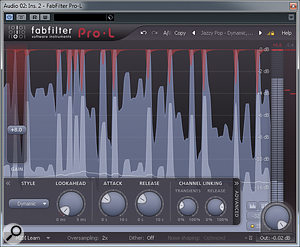 If the basic Pro‑Q interface is beautiful in its simplicity, that of the Pro‑L limiter is positively stark. Apart from a few tiny controls relating to the metering, there's simply a huge gain slider and a similar scrolling display to that featured in Pro-C, displaying both input and output levels, with gain reduction superimposed in red. Output gain is adjusted via a pop‑up control beneath a set of more conventional, vertical meters, and if you hold down Alt while turning either this or the Gain control, the two move in tandem. This is great for performing A/B comparisons between processed and unprocessed signals.

There is, moreover, more to Pro‑L than meets the eye, thanks to the extra controls that are revealed by pressing the Advanced button. The most important of these is probably the choice of four different limiting algorithms. 'Transparent' and 'Allround' offer different trade‑offs between invisibility and loudness, while the other two, 'Punchy' and 'Dynamic', are designed to preserve the appearance of dynamic variation in different ways. The former permits a certain amount of gain pumping to occur, adding rock & roll excitement, while the latter is said to work by "enhancing transients before actually applying limiting”, in order to preserve them in the mastered output. All of these work well, and the differences are clearly audible, though harder to describe: Punchy mode seems to subtly bring out the 'thump' of kick and snare, whereas Dynamic mode focuses the sound more on the initial transient attack. The variation is certainly useful in practice, though the transient shaping that's possible in Dynamic mode is nothing like as extreme or as versatile as the 'Intelligent Transient Preservation' algorithms in Slate Digital's extraordinary FG‑X mastering processor.

There's no M/S mode here, but channel linking can be freely adjusted separately for transients and for the rest of the signal. In situations where a hard‑panned percussive instrument is hitting the limiter threshold, for example, this would allow you to control its peaks without affecting the other channel, and could sound more natural in such circumstances. There are also Attack and Release controls. These don't affect the action of the peak limiter itself, which obviously has to act instantly — you can choose varying amounts of lookahead to help it do so — but of a secondary 'release stage', which governs recovery from any initial transient-limiting event. Long attack and release times help to prevent distortion but also make the action of the limiter more audible, introducing noticeable gain pumping.

In action, Pro‑L is both one of the best‑sounding conventional limiters I've used, and as importantly, very easy to use. A small pop‑up at the bottom lets you switch Pro‑L into 2x or 4x oversampling modes, with noticeable improvement in sound quality at the expense of heavy CPU hit; my computer could barely run Pro‑L in 4x mode — not that this is such a problem in a mastering context. As in the Pro‑C compressor, the scrolling graph provides a really informative way to visualise the way gain reduction is taking place, and you can follow how the characteristic shape of the red gain‑reduction line changes with different attack and release settings.

With so many plug‑in mastering processors out there, there's a temptation to constantly be chasing after the newest 'magic bullet', when we might get better results by exploiting the standard tools to ther fullest extent. The great thing about Fabfilter's mastering plug‑ins is that they make this really easy to do. All three are up there with the best in terms of sound quality, and are packaged in interfaces that have been thoughtfully designed to help us get the best from them. They work well in conjunction with other plug‑ins and, especially, with each other, and I can see myself using them a lot in the future. If you're not already committed to a suite of mastering plug‑ins, or you're not entirely satisfied with the ones you do have, download the demo and give these a spin.

Some manufacturers share Fabfilter's approach of supplying separate plug‑ins for each of the principal mastering processes, while others prefer to create a single monster one‑stop mastering plug‑in. There are numerous alternatives in both camps. In the former, for example, you could explore the offerings from Voxengo, Waves, Sonnox and Sonalksis, along with Universal Audio's Precision series for the UAD platform. In the latter, Izotope's Ozone and IK's T‑Racks are probably the most prominent.

Fabfilter's take on the conventional mastering processes of compression, EQ and limiting is both good‑sounding and easy to use.