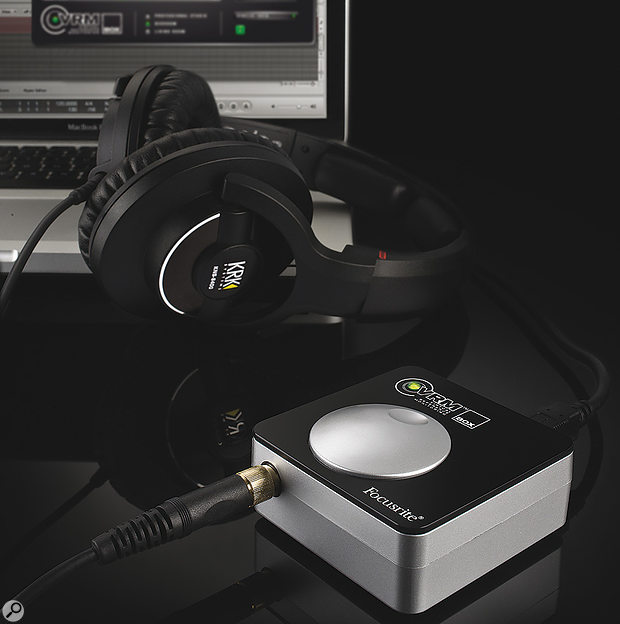 For those of us who find our headphone mixes don't translate well, Focusrite have created a virtual listening environment that replicates the experience of monitoring on speakers.

One of the biggest difficulties for many home‑ and project‑studio musicians is achieving accurate, reliable monitoring, especially at the low-frequency end. However much room treatment you apply, a pair of cheap monitor speakers in a small bedroom is never going to tell you precisely what is going on below 100Hz; and there are numerous musicians for whom even a modest speaker setup isn't possible, whether for lack of space, or money, or tolerant neighbours. Many of us are, therefore, forced to mix largely or entirely on headphones, and hope or pray that these mixes will translate reasonably well to loudspeakers.

With this market in mind, various manufacturers have tried to come up with clever ways of processing a headphone signal to reproduce, at least to some extent, the experience of listening on loudspeakers. Focusrite's take on this concept is called Virtual Reference Monitoring, or VRM, and appeared first in their Saffire Pro 24 DSP audio interface, reviewed by Hugh Robjohns in SOS November 2009. Recognising that VRM will have wider appeal, Focusrite have repackaged it into a stand‑alone box that will integrate into most systems with a spare USB port.

Hip To Be Square

The VRM Box is a small, light, square object with a single large volume control. On one face resides a quarter‑inch headphone socket, while the opposite side houses a USB port and a coaxial S/PDIF input. It will work as a plug‑and‑play, two‑in, two‑out USB interface, but to use VRM, you need to install its control-panel utility from the supplied CD.

For simple headphone mixing, you can use the VRM Box as an ASIO or Core Audio output for your DAW. However, many people will want to use it alongside another interface, and that's not an entirely trivial proposition. Aggregating multiple interfaces on one computer can be a recipe for trouble, especially under Windows, while repeatedly going into your DAW's setup pages to switch between the VRM Box and your existing interface would quickly become very tedious. Focusrite's solution, assuming you have a spare S/PDIF output on your main interface, is to connect that to the VRM Box's S/PDIF in. It will then automatically lock to an incoming S/PDIF signal at any sample rate up to 192kHz — although, since the VRM Box itself will only operate at 44.1 or 48kHz, this is presumably resampled at a lower rate for processing. I had some trouble at first in getting the VRM Box to work correctly under Windows 7, but Focusrite's technical team were responsive, and quickly came up with a new driver that fixed the problem.

I had originally assumed that when connected via S/PDIF, the VRM Box basically became a stand‑alone DSP processor, but not so. It turns out that, unlike the Saffire Pro 24 DSP, the VRM Box's VRM processing is actually handled by the host computer rather than by a DSP. So if you use it in this way, your headphone signal is pumped out of your main interface, then back into the computer, to be processed with VRM, before finally emerging from the VRM Box's headphone output. This seems unnecessarily complicated, ties up an S/PDIF port to no great purpose, and on my PC, seemed to make Pro Tools 9 rather unhappy (I'm not blaming Focusrite for this, as I've noticed before that Pro Tools running under Windows doesn't like having more than one audio device connected). It also means that the signal emerges from the VRM Box noticeably later than it does from your speakers, so you really need to mute or dim the speakers while you listen on phones, to avoid out‑of‑time spill from the speakers.

All in all, I can't help thinking it would be simpler just to offer VRM as a plug‑in that you can run within your DAW. Of course, this opens up the possibility of the user accidentally bouncing mixes with VRM applied, but apart from that, it would simplify things a lot, and would also make it a lot more user‑friendly. Because there are no physical controls at all apart from the volume dial, any change of speaker model or room environment needs to be made within the VRM control panel, so there is no easy way to switch between VRM settings or even turn VRM on and off as you listen to your mix. A physical on/off control for VRM would be very handy. 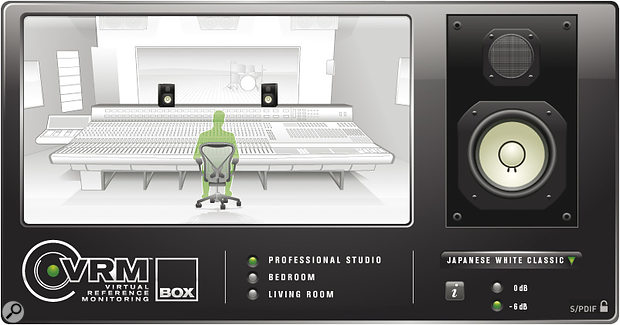 The emulation of Yamaha's classic NS10m speaker is shown in this screenshot.

The VRM software, understandably, imposes a noticeable load on the host machine, and I found that mixes that would previously play back OK in Cubase were stuttering and falling over when I switched on VRM. It also requires a certain amount of headroom to work properly, and you can switch in a ‑6dB pad to give it some breathing space.

The VRM functions themselves were described at length by Hugh in his review of the Saffire Pro 24 DSP, so I'll only summarise them here, and refer readers to that review for more detail. In essence, you can choose between three virtual monitoring environments — a studio control room, a bedroom and a living room — and various sets of speakers you might typically find in those environments. As far as I can tell, the rooms and the speaker options are the same here as in the Pro 24 DSP, but whereas that interface allows you to monitor in various virtual positions within the room, that's not an option here.

I almost passed up the chance to review the VRM Box, thinking it would turn out to be a gimmick with little practical value. How wrong I was! Within five minutes of plugging it in, I had become aware of all sorts of things that were wrong with my mixes. Of course, not all headphones sound the same, and VRM won't compensate for the idiosyncrasies of your particular 'phones; for example, I often find it hard to get the level of lead vocals right on my Sony MDR7509s, and VRM didn't particularly improve matters from this point of view. In other respects, though, it was very useful indeed. My own 'studio' is crammed into a corner of a small loft space, and making accurate judgements of bass levels and tones on my loudspeakers has never really been possible, so I've often used headphones to do so. Flicking between studio monitor models was a real eye‑opener in this respect. I began with the Adam S2A speaker model, and the family resemblance to my own Adam A7 speakers was unmistakeable. However, mixes that had sounded fine both on these speakers and on several pairs of headphones translated quite badly to some of the other speaker models. The 'British Studio' model, based on a pair of Quested S8s, I found particularly revealing, with any excess in the low end generating horrible honks and booms, and any hint of mud in a vocal or reverb return sticking out like a sore thumb.

The psychoacoustic 'virtual speaker' effect works surprisingly well, giving you a real feeling of sitting in front of a stereo sound source rather than in the middle of one. I lost count of the number of times I hastily hit Stop, thinking that the entire office could hear whatever it was I was listening to! I'm not sure it makes music more enjoyable to listen to, and it certainly doesn't sound sound anything like as good as a real pair of Questeds or Genelecs in a decent room, but it doesn't need to do so in order to be useful.

For me, the primary value of the VRM Box is to check how well mixes translate, and to that end it is a very valuable tool. For those who are mixing on the road and only need a single headphone output, the hardware element does its job very well. For the rest of us, a plug‑in would be simpler, but despite this, I will certainly be buying a VRM Box. I can't think of any other affordable product that has made more difference to my own mixing.

For those who want to know more, Focusrite have created a SoundCloud page that contains some interesting demonstrations of Virtual Reference Monitoring. Surf to http://soundcloud.com/focusrite/sets/focusrite-virtual-reference/ for more.

The VRM Box is a small but surprisingly useful box that will be of real value to anyone who has to mix on headphones.