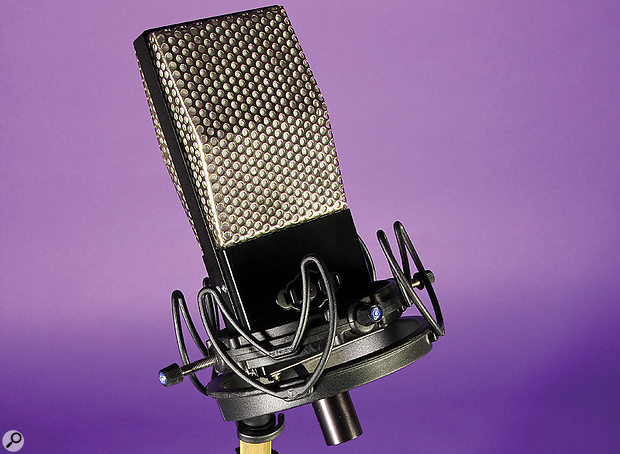 This classically styled mic incorporates Cloud’s own preamp design to negate some of the pitfalls traditionally associated with ribbon microphones.

The Cloud Microphones story is an interesting one, the potted version being that it was set up in Tucson, Arizona by Stephen Sank. His father, Jon Sank, worked at RCA with Harry Olson — one of the leading lights in ribbon mic design from the 1930s and ’40s — and subsequently went on to take over as the head of acoustical research there. Stephen Sank set up a workshop repairing and refurbishing vintage ribbon mics with the knowledge and techniques taught by his father. Next door was the project studio of Rodger J Cloud, for whom Sank refurbished a lot of vintage RCA mics, and eventually the two decided to collaborate on the design of a brand-new microphone, hand-built in America, that improved upon the classic RCA designs. SOS Editor In Chief Paul White reviewed the company’s first model, the JRS 34P (and its active sibling, the JRS 34), back in December 2011 (/sos/dec11/articles/cloud-mics.htm), commenting very favourably upon the sound character.

The subject of this review is another closely related design, launched at the AES Exhibition in 2013 and serving as the current flagship model. In clear homage to the original RCA microphone, the Cloud 44-A looks superficially the same as the two preceding JRS 34 models, but there are some important differences...

Presented in a large and elegant hardwood box with a sculpted foam interior, the mic is protected from wind blast and stray metal filings within a soft microfibre storage bag, and it is supplied with a slightly adapted Rycote InVision Studio shockmount (the customisation being Cloud badge inserts and blue grips on the screw clamps). There is also an Allen key to adjust the pivot friction on the mic’s built-in stand adapter, and I suppose there would normally be a user-guide too. Unfortunately, the review model didn’t have a user guide, and none is available for download from the manufacturer’s web site, but the specifications and other pertinent details are available on the mic’s product page.

Measuring roughly 75mm wide, 45mm deep and almost 210mm high, the 44-A is quite a sizeable microphone, broadly similar in silhouette to the RCA 44, yet much thinner and weighing only 400g. This feels quite wrong; big traditional-looking ribbon mics are normally quite heavy! The aluminium and steel body of the 44-A is painted black, with the Cloud logo identifying the nominal front surface — although this mic has the traditional, symmetrical fig-8 polar pattern.

The ribbon element is protected behind a dual-layer windscreen with angled front and rear grilles, which dominate the appearance of the mic with their bright silver finish. The microphone’s model number is engraved on one body side panel, while its 48V phantom power requirement is engraved on the other as a reminder, adjacent to the off-centre XLR output socket. A swivelling (±90 degrees) stand-mounting bracket with a 5/8-inch thread is permanently attached to the centre of the mic body’s baseplate. A silver toggle switch occupies the space on the opposite side of the stand adaptor from the XLR, marked with the engraved letters ‘M’ and ‘V’ (of which more in a moment).

The microphone’s construction appears solid and reliable with, inevitably, more than a hint of classic retro styling, which is quite attractive. However, some aspects of the assembly reflect its hand-built nature rather more than I feel is entirely appropriate in a microphone costing as much as the 44-A does. In particular, the toggle switch and its visible shake-proof washer make this feature look ‘DIY modified’ rather than manufacturer designed.

Apparently, the ribbon unit itself is handcrafted to the exact 1930 specifications of Harry F Olson’s original RCA 44 design, but with 21st century materials — including a powerful neodymium magnet (which partially explains the low weight). This is a ‘long ribbon’ design, measuring 60mm in length (2.35 inches), 4mm wide (0.2 inches), and 1.8 microns thick, and the whole assembly is suspended from an internal shockmount. Cloud Microphones provide a two-year warranty on the ribbon itself, and a limited-lifetime warranty on all other parts of the microphone when it is registered with the company.

The frequency response of the microphone in ‘normal’ mode...

...and in ‘V’ mode, in which the mic’s low-frequency response is significantly reduced.Another significant technological evolution in the 44-A is also shared with the JRS 34 active ribbon microphone, and that is the inclusion of an internal gain stage. The electronics comprise a discrete J-FET amplifier derived directly from Cloud’s patented Cloudlifter cascade preamp design, and bestows the 44-A with a generous output level of around 18mV/Pa — comparable with a high-output capacitor mic. The specifications claim the maximum SPL capability is more than 138dB SPL above 1kHz.

The mysterious toggle switch marked ‘V’ and ‘M’ controls a high-pass filter which dramatically reduces the mic’s low-end proximity effect. The ‘M’ position is the default (filter-bypassed) condition, with ‘M’ signifying Music. In this mode the frequency response notionally extends between 20Hz and 20kHz, although it actually starts to roll off above about 8kHz and is a good 10dB down by 20kHz — a fairly classic vintage ribbon high-end characteristic. From about 1kHz downwards, the sensitivity just keeps on rising smoothly, reaching about +5dB by 20Hz. There is quite a formidable proximity effect here, with considerable sensitivity to very low frequencies, too, so the inclusion of a decent shockmount is a very welcome one.

With the mode switch in the ‘V’ (for Voice) position, the top-end response stays the same, but the high-pass filter tames the low-end proximity effect considerably, gently rolling off below about 250Hz at around 3dB/oct. The actual tonal balance is still affected by the distance between mic and source, of course, but this switch does help to control the mic’s proximity effect, which can be quite overpowering when used close to the source. Cloud Microphones claim the 44-A is, “the first and only active ribbon microphone with switchable Voice/Music response curves” — although there have been a few passive ribbons over the years with similar facilities.

Of course, the ‘V’ position is not restricted only to voice applications; it’s handy whenever a less powerful low-end output would be beneficial, perhaps because of the tonal balance of the sound source itself, or because of placement proximity, or just because of unwanted ambient subsonic energy.

Although the built-in gain-stage requires phantom power, of course, it also protects the delicate ribbon generator from phantom power accidents (which will give many users considerable peace of mind), and usefully minimises the gain, noise and impedance requirements of the external preamp. The Cloudlifter cascade gain stage is a very elegant and effective design, which is used to good effect here.

Tonally, the 44-A is a little darker-sounding than many more modern designs, which take more advantage of modern technologies deliberately to extend the ribbon’s high-frequency response, but this is part of its charm and contributes to its very natural character. The ribbon microphone market has expanded enormously over the last decade or so, and there is a large number of very affordable and well-performing ribbon mics around now, but the 44-A combines classic design — both visually and sonically — with high-tech developments, and is well worth auditioning.

The Cloud 44-A is a lovely, traditional-sounding ribbon microphone with a full-bodied low end and a clear, detailed mid-range. The latter tends towards a useful mild forwardness when the filter is switched in, but entirely because of the psychoacoustic effect of the reduced low-end, rather than any actual change of mid-range character. The treble response is smooth, open and very natural-sounding. There is none of the edgy high-end emphasis or resonance so typical of large-diaphragm capacitor mics, yet transients are portrayed with plenty of detail, with all the speed and clarity you would need, particularly on acoustic guitars, pianos and percussion. And should you decide that some more ‘air’ is required in the context of a busy mix, the 44-A accepts high-shelf EQ lifts very nicely, without revealing any audible nasties.

The UK retail price of the Cloud 44-A buys some very highly regarded ribbon mics, the most ‘classic’ option being a matched pair of Coles 4038s (with enough change to buy the elastic hangers, too!). Royer’s R122 and AEA’s A840 active ribbons are also both a little less expensive. If it’s the classic RCA styling that appeals, AEA’s accurate R44C and R44CX passive models cost more than twice as much, and the company’s A440 active version nearly three times more, while Cloud Microphones’ own JRS 34 model is around £600$400 less.

A classic take on the original long-ribbon design, but updated with Neodymium magnets and integral high-quality gain stage.