You may recall how impressed we were with the original Cloudlifter CL1, which was essentially a block of clean DC-coupled gain, driven by phantom power, and able to add 20 to 25 dB of level to the output of a dynamic microphone. This proved to be of particular benefit when connecting passive ribbon mics to preamps that struggled to produce enough clean gain, but it also improves the sound quality of some moving-coil mics. Its direct-coupled, discrete J-FET circuitry isolates the mic from the phantom power source, so there's the added security of knowing that you'll never accidentally apply phantom power to your ribbon mic! (Of course, as phantom power is not passed through, the CLZ can't be used with microphones that require phantom power.) 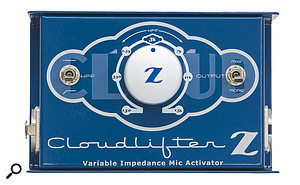 The larger CLZ model is based on the same concept but adds a variable input impedance (150Ω to 15kΩ), so that you can adjust it to find the sweet spot for any mic. This is typically 1.5kΩ or higher but lower values may suit oddball vintage mics with very low output impedances. This time, the output level is switchable from around +12 to +24 dB via the More/Max switch, and there's a low enough output impedance to drive long cable runs where necessary. There's also a variable low-cut filter that ranges from 20 to 250 Hz. When switched on, this is linked to the impedance control, such that the filter frequency falls as the impedance setting is increased. It's also dependenton the mic's output impedance. In most cases, the filter frequency will be between 60 and 100 Hz when you find the sweet spot for the connected microphone. All this is built into a very rugged steel enclosure that's around the size of a DI box and is fitted with rubber feet. There's also a shallow metal 'bridge' on the underside that could take a strap or velcro strip for fixing in a live situation. Both the in and out audio connections are on balanced XLRs, and there's no power supply needed, other than standard 48V phantom power.

My tests started with an SE Electronics R1 passive ribbon mic and found that this was happiest with impedance settings of 3kΩ or above, the level increasing and the high-end opening up as the impedance was increased. As with the CL1, the sound is incredibly clean, with enough gain to give your mic preamp an easy time, but that variable impedance really does help in fine-tuning the tonality of the mic. At 1.5kΩ and below, the level fell away progressively, as I'd expected, but it's a useful option if, as I mentioned earlier, you have any very low-impedance vintage mics. Bringing in the low-cut filter was interesting, as at the higher impedance settings it made little subjective difference to the tone of typical speech, but once down to 1.5kΩ I could just hear it kicking in, and at lower settings the sound got progressively thinner. All in all, then, the CLZ is an incredibly useful and genuinely worthwhile box for anyone who owns one or more passive ribbon mics, but it also brings out the best in moving-coil dynamic mics too. The CL1 is still a great product in its own right, but the variable impedance of the CLZ, plus that handy low-cut switch, adds a new dimension to an already great idea.