Drumasonic Luxury is the follow-up to Drumasonic 2, recently reviewed in SOS. For the uninitiated, Drumasonic 2 is a highly flexible, high-quality sampled drum instrument for Kontakt, featuring drumkits sampled in two radically different rooms, each comprising a selection of kitpieces, with comprehensive control over multiple close mics, ambient mics and effects.

Since Drumasonic 2's release, further sounds have been in development; the first batch of these are now available as Drumasonic Luxury (henceforth referred to as Luxury). So is Luxury an expansion pack for Drumasonic 2? The answer is yes — and no. Luxury does indeed comprise new drum recordings, but is sold as a separate product; ownership of Drumasonic 2 is not necessary to use Luxury. For a full description of the Drumasonic 2 concept, the aforementioned review has the details: /sos/jan13/articles/Drumasonic-2.htm. This review examines the new kit sounds, along with performance optimisations implemented in Luxury; these have also been ported across to Drumasonic 2 as a version 2.1 update. 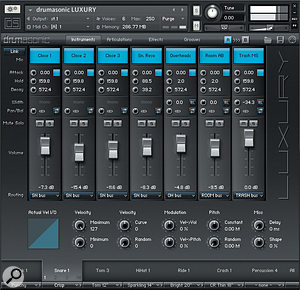 The instruments tab currently focused on the snare. Level, panning and envelope controls are provided for each individual micrphone; the inspector below displays the overall velocity response and pitch settings of each kitpiece.Functionally, Luxury and Drumasonic 2 (v.2.1) are identical, the visible difference being the word 'LUXURY' displayed vertically where an eighth mic channel strip would have been. Think of Luxury as another Drumasonic 2 instrument and you'll get the picture. Ironically, Luxury actually employs fewer mic channels than either of Drumasonic 2's Damped Room or Large Room instruments; in the case of Luxury each kitpiece has three stereo ambience mics and up to four mono close mics, depending on the kitpiece.

Three kick drums, two snares, one five-piece tom set, three hi-hats, two rides and four cymbals make up the kitpiece selection (see the 'Luxury Kitpieces' box). The percussion slot proffers the same synthetic kick and snare samples as in Drumasonic 2's Damped Room, but not the claps, cowbell, sticks or tambourine. The kick drums pack plenty of oomph: 'Punchy' is full, round with a satisfying slap; 'Oldskool' is the brightest of the three, tuned a touch higher, with extra mid-range and a lingering low mid tail; whilst 'Snappy' is tuned low with a slightly hollow-sounding attack. The two snares are radically different; the resonant, metal-shelled 'Crisp' is bright with body, attitude and a long ringing tail. Its dynamics are superb, ranging from an emphatic crack to beautifully subtle ghost notes. 'Bashy' is woodier, tuned lower and with the emphasis on snare rattle, giving it an almost louche quality. Left fully undamped, intricately detailed parts played on these snares could sound messy, but they can be effectively shaped into submission using the mic channels' envelopes; anything from ballad-damage explosions to manic metal and bone-dry disco are possible with these two snares and the right amount (or lack) of ambience. The toms are full-bodied and round, with a more distinct note than those in Drumasonic 2. All the cymbals benefit from not one but two close mics in addition to the overheads and room mics, and sparkle as they should; the Bright ride in particular is very pleasing, with a clear stick impact. Of the cymbals, only two are crashes — personally I'd have liked three. Frustratingly, the Drumasonic architecture doesn't allow for the same kitpiece articulation to be used twice at different tunings.

For Luxury, the makers chose the vaulted cellar of an old monastery in Bavaria as the recording venue, this having a bright and lively ambience with, in their words, an "extremely pushing” character, imparting a very attractive coloration to the overall kit sound. The natural reverb time is shorter than Drumasonic 2's Large room, however this can be magnified by devious means, using heavy compression and/or applying Transient Shapers to the ambience bus channels. Alternatively, you could opt to shorten the natural ambience using the mic channel envelopes; this can improve the clarity of 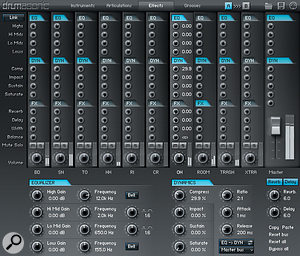 Luxury sees some improvements and optimisations to the initial release of Drumasonic 2 (these are also implemented in the version 2.1 update to Drumasonic 2). Firstly, Drumasonic's lengthy samples can cause the polyphony count to run very high when allowed to play fully undamped. This can now be reduced (to a user-adjustable degree) thanks to an algorithm that fades out ringing notes once they reach a psychoacoustically unperceivable volume relative to that of other sounding notes; this also reduces CPU usage. New round-robin algorithms individual to each kitpiece type effectively tackle the 'machine-gun' effect; snare rolls in particular are now super-smooth and incredibly realistic.

Specific to Luxury, the samples' transient impact is subjectively enhanced by the inclusion of 0.5ms of natural pre-strike 'air' at the front end. It's not enough to introduce noticeable latency, but it does seem to intensify the drums' presence and realism. A touch of post-production EQ and saturation was applied to the samples to minimise 'muddiness' and reduce the need for corrective EQ. Luxury's overhead mics are less delay compensated than those in Drumasonic 2, the intention being to create a 'bigger' sound. All Luxury's kitpieces (apart from the kick drum, obviously) come with the full complement of sticks, rods, brushes, wires on and wires off articulations, all selectable in real time via keyswitches.

One drawback of presenting Drumasonic kits as separate Kontakt instruments is that you can't substitute drums from one room/kit with those of another, unless you run more than one instance — this is also true of other 'powered by Kontakt' drumkits (NI's Abbey Road series, for example). However, you'd be unlikely to set up kitpieces in different rooms to record a real-life drumkit, so this can't really be cited as a criticism unique to this product. Nevertheless, Luxury is a worthwhile addition to the Drumasonic fold, and a must-have for existing owners and fans of Drumasonic 2. If you're a newcomer to this brand, Luxury is an affordable introduction to the Drumasonic world, at only the cost of most expansion packs.

Aside from the original Drumasonic 2, other comparable high-end sampled drums include Toontrack's Superior Drummer 2, FXpansion BFD3, XLNaudio Addictive Drums, NI's Abbey Road Drummer series and Steven Slate Drums 4. To its benefit, Drumasonic Luxury offers an impressive range of microphone options, and comes at a very affordable price. At an even more attractive price, Drumasonic Luxury LE provides all the kitpieces and the same functionality as the full version, but without the rods, brushes or 'wires off' samples.

Curious to know more about the thinking behind Luxury, I put some questions to Drumasonic's Samuel Dalferth.

Q: "Was there any particular reason you chose to release Luxury as a separate product, rather than incorporate it into Drumasonic 2's library?”

A: "The maximum number of samples per Kontakt instrument is limited to 32,000, so there was no way around putting them into a new instrument. In addition to that, it's OK for us to put a different kit and different room into a new instrument. Of course, our vision is to have a huge instrument with millions of samples and optional add-ons that can be integrated seamlessly, but at the moment, the Kontakt engine and licensing system can't handle it.”

Q: "Will there be the option to use our own convolution impulses in a future update?”

A: "Importing impulse responses and/or samples of any kind into a 'Powered by Kontakt' product is not allowed/possible at the moment, but we tried to make the routing as convenient and flexible as possible, so that the usage of external effects is easy.”

Drumasonic Luxury comes as a download-only package, comprising one rar file containing the installation file, documentation and required data folders, plus eight self-extracting rar archives for the sample data. Activating the software is via the usual NI Service Centre procedure. For Luxury, Drumasonic have elected to abandon the additional license file previously required to complete the activation of Drumasonic 2; a welcome move, as it complicated matters unnecessarily. Windows XP users (yes, we still exist) also need to be aware that the instruction to install everything to the same location applies to Windows 7. XP users will therefore need to copy Luxury's Data folder to this location in order to use its in-built preset system: C:\Documents and Settings\Administrator\Local Settings\Application Data\Drumasonic Luxury.

The high quality of sampling, extensive mic coverage and control, punchy new samples and an appealing, lively room ambience make Luxury an excellent complement to the existing Drumasonic 2 kits. Being a stand-alone product in its own right, it's also an affordable introduction to the Drumasonic world.