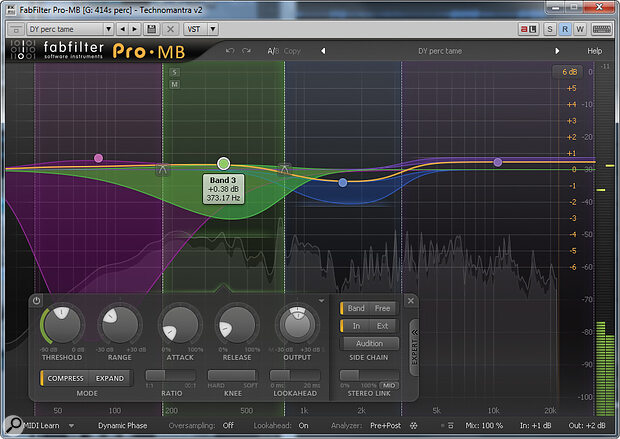 FabFilter are on a mission to rethink familiar effects and processors. What does their take on the multi-band compressor have to offer?

Whereas many plug-in developers seek to ape both the sound and the look of vintage outboard processors, others are trying to escape from the paradigms that were established by hardware designers half a century ago, and write software that performs well on its own terms. FabFilter have had great success with this approach: the EQ and dynamics plug-ins that make up their Mastering Pack, for example, are notable not only for their extremely clean sound, but also for their innovative and intuitive user interfaces. (They also have the plus of being available in all major plug-in formats including 64-bit AAX, and not requiring any further authorisation once bought and downloaded.)

The latest addition to the FabFilter stable applies the same principles to the world of multi-band dynamics processing. Dynamics processors that operate only on selected frequency bands are of necessity more complex to set up and use than their broadband forefathers, and many of the multi-band plug-ins I've tried are intimidatingly complex, so this is definitely an area that could benefit from some innovation and intuitive design!

FabFilter's Pro-MB promises to innovate in several respects. Sonically, the main new weapon in its arsenal is something that FabFilter call Dynamic Phase Filtering. When you insert a conventional multi-band plug-in across a complex signal such as a full mix, you often have the sense that the sound is being subtly or not-so-subtly changed even when no actual dynamics processing is taking place. This is a consequence of phase shift caused by the filtering used to split the incoming audio into separate frequency bands. Some multi-band dynamics plug-ins offer an alternative linear-phase mode, which avoids phase shift, but brings with it the potential for other problems such as 'pre-ringing' and increased latency. Pro-MB does offer both conventional minimum-phase filtering and linear-phase filtering as options, but its default Dynamic Phase algorithm is claimed to offer the best of both worlds: there's no phase shift unless dynamic processing is actually taking place, but there's also no latency or pre-ringing.

FabFilter have also applied some fresh thinking to the user interface. Most multi-band plug-ins — in fact all the other ones that I can think of — operate on the principle of dividing the entire frequency spectrum into multiple separate bands, each with its own dynamics processor attached. The idea here, by contrast, is that processing is applied only where it's needed. Open up a new instance of Pro-MB, and you'll see a real-time spectrum analyser running in the background with an orange horizontal line superimposed halfway up. Hover the mouse somewhere near this line, and a blob will appear that follows your movements, with vertical lines either side. Click, and a new processing band is created between the two vertical lines. Click elsewhere and a second band is created. You can drag either the entire band or its outlying lines to reposition it, and when you get near enough to an adjacent band, the relevant vertical lines will snap together to create a conventional crossover. Except that it's not quite conventional, because you can also click and drag vertically to freely change the steepness of the crossover anywhere between 6dB and 48dB per octave. The upshot of all of this is that if you want to set up Pro-MB as a conventional multi-band compressor, you can, but you can also use it as a dynamic equaliser, focused only on frequency-specific problems such as vocal sibilance or acoustic guitar soundhole resonances.

When you have a band selected, the controls for its dynamics processing appear in a semi-transparent grey area superimposed over the lower half of the spectrum analyser. Innovation is evident here, too, for as well as the conventional Threshold, Ratio and time constant controls — in fact the latter are anything but constant, being heavily programme-dependent — there's also a Range control which sets the total amount of gain increase or decrease that can be applied in that band, per-band lookahead and soft/hard-knee parameters, and a switch that toggles between compression and expansion.

As with several of the other FabFilter plug-ins, you can also open up a small Expert tab, which in this case lets you vary the extent of stereo linking, and do some very interesting things with side-chaining. Not only is it possible to use an external side-chain signal — so you could, for instance, set up Pro-MB to duck the mid-frequencies in your electric guitars when the vocals come in — but you can also unlink the side-chain crossovers from those used in the processing, making it possible to have gain reduction in one frequency band triggered by peaks in another.

Once you've activated some dynamics processing, more lines appear in the spectrum analyser, allowing you to visualise what you're doing in a very intuitive way and providing effective visual feedback as to where and when gain change is occurring. What's more, in the fine tradition of FabFilter's other plug-ins, everything can be configured very easily with a few mouse moves, and there are lots of nice touches such as context-sensitive controls that appear when you hover the mouse over crossovers, and so forth. With the exception of very simple designs that are lacking in features, such as Cubase's built-in Multiband Compressor, I have never come across a multi-band plug-in that is so straightforward to set up. My only real reservations are that it would be nice to be able to zoom on the horizontal axis, so as to focus on a particular frequency range, and that sometimes one wants to reveal the part of the spectral analysis that's hidden behind the control panel, but it doesn't seem to be possible to move the panel about.

I imagine that most of us tend to reach for multi-band dynamics plug-ins with a heavy heart, as they are most useful for addressing problems with recorded audio. But inasmuch as it's possible to make a multi-band compressor that is a joy to use, FabFilter have done so.

For a start, it's so refreshing to insert a multi-band compressor across a source and not immediately find yourself thinking 'What just happened to the sound?' FabFilter's claims for their Dynamic Phase technology are well founded, because no matter how much you chop up the frequency spectrum, Pro-MB is completely inaudible unless it's actually compressing or 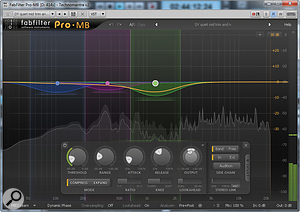 Pro-MB makes it easy to visualise what's happening to your audio, both through the animated lines showing gain reduction and the spectrum analyser, which shows the signal before (solid grey) and after (grey line) compression. expanding. And when it is compressing or expanding, it does so with a smoothness and agility that I haven't heard in any comparable product. The transparency with which you can gently stabilise the tonality of a source, or nudge it in a particular direction, is highly impressive.

While it is not perhaps as open-ended as something like Flux's Alchemist, Pro-MB is much simpler to use, yet remarkably versatile considering this simplicity. The ability to limit the amount of gain change that can be applied in each band is such a useful feature that it should be featured in every multi-band plug-in, while the side-chaining options open up all sorts of creative possibilities. Because you can put bands only where you need them, it's much easier to set up dynamic equalisation processes such as de-essing than in a conventional multi-band processor. The ability to switch bands between compression and expansion and to radically change the crossover slopes makes it trivial to set up a high-frequency expander to tame tape hiss, or to emphasise an individual element within a drum mix.

In an ideal world, there would perhaps be no need for multi-band dynamics processors. But, as Paul McCartney once sang, in this ever-changing world in which we live in, we do find ourselves having to deal with sibilant vocalists, badly recorded guitars, off-kilter mixes and many other varieties of problematic audio that can't be fixed with simple equalisation. FabFilter's Pro-MB makes the task of dealing with these problems as painless and transparent as it could possibly be, and unless you're lucky enough to be dealing with perfectly recorded sound all of the time, I suspect there'll be a place for it in most people's plug-in folders.

Once again FabFilter have applied fresh thinking to a familiar category of processor, and, once again, the results are a triumph.