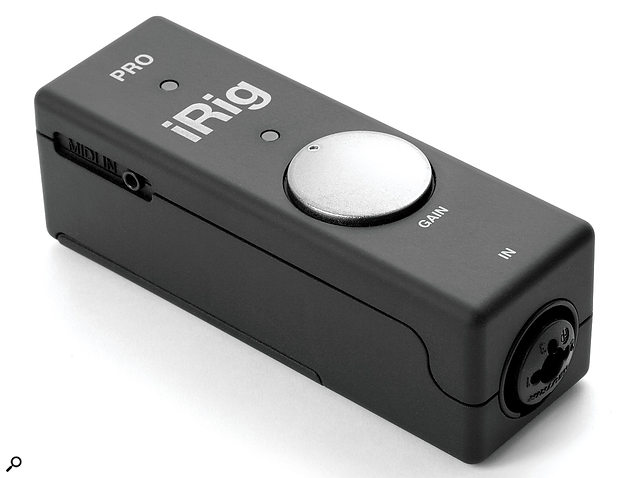 The iRig Pro: the combi jack/XLR to the right shows you just how small it is.

Interfaces for iOS devices (iPads, iPhones, iPod Touches) have been with us almost as long as the devices themselves. Unlike iOS devices, whose focus is 'one device, many functions', manufacturers releasing interfaces designed specifically for mobile use have tended to focus on a 'one device, one function' approach. For musicians on the move this can prove frustrating as no single portable interface could cover all eventualities (guitar input, mic input, MIDI input), so necessitating the plugging in and unplugging of interfaces when a change of function is required.

IK Multimedia have endeavoured to change that approach with the iRig Pro, bringing us an interface that is as portable as an iOS device itself, yet which allows for a range of connectivity. Indeed, the iRig Pro manages to squeeze a combined XLR and quarter-inch jack input, a 3.5mm MIDI input, a phantom power switch, a proper gain control and a multi-function LED input level indicator into just 32 x 105 x 21 mm of space.

The iRig Pro is supplied with a useful range of cables. These include a MIDI five-pin-to-minijack lead, and lightning, 30-pin and USB cables to connect to it to an iOS device or Mac (did I mention it was Mac compatible? Well it is). None of these feature generic plug types at the iRig Pro end, so woe betide you if you forget to take them to the gig! The iRig Pro is powered by the device it is connected to for everything except phantom power, which requires you to fit a 9V battery (supplied).

IK Multimedia generously bundle quite a lot of software with the iRig Pro. Users of iOS get SampleTank Free, VocaLive Free, AmpliTube Free and iGrand Piano Free, which doesn't sound that generous, but each one comes with extra content (amp models for AmpliTube, for example) over and above that which you normally get with the free apps. Mac users can take advantage of AmpliTube Metal, SampleTank XT and T-RackS Classic mixing and mastering suite, with four classic effects processors.

Despite a relatively cheap and plasticky feel, connections to the Pro unit feel reliable enough — although possibly the minijack MIDI input might start to degrade (like a headphone socket) after a large number of plugging ins and outs. The gain control is certainly an improvement on the thumbwheel found on comparable devices such as the iRig HD and the Apogee Jam. In terms of sound quality, I suspect that the iRig HD circuitry has been re-utilised in the iRig Pro, as sound quality is equally as good, with low background noise.

The big plus here is of course that you can input both audio and MIDI to your iOS device (or Mac) simultaneously using an interface that is as portable and easy to use as the device itself. For that alone the iRig Pro is worthy of your consideration if you are a musician on the move.