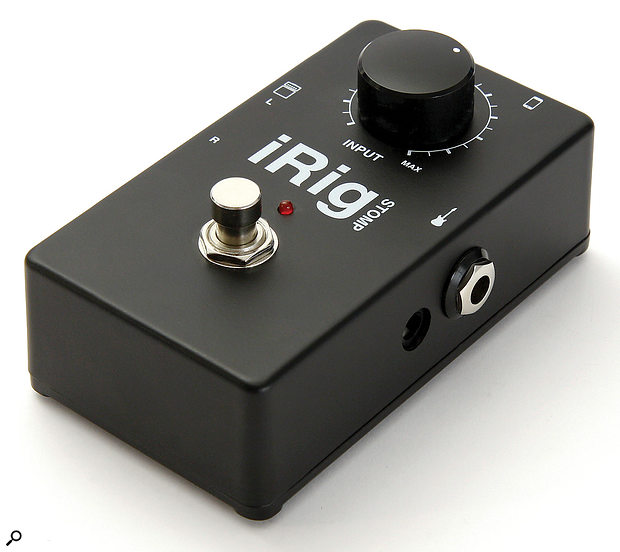 IK Multimedia were one of the first companies to get behind iOS as a serious musical tool, but even the best software often needs some form of additional hardware component to get the best out of it. The iRig Stomp may look like a typical guitar effects pedal, but it is actually a guitar interface that will work with the iPhone, iPod Touch and iPad, and is compatible with most iOS signal-processing apps for recording, practising or live performance. It can be incorporated into an existing live pedalboard setup or even used in place of one, as long as you have a place to leave your iOS device connected where you won't tread on it!

The iRig Stomp is built into a tough aluminium case and has a traditional footswitch with LED indicator, as well as an input gain control. Your guitar plugs into a quarter-inch jack socket on the right, there's a stereo output on the left, again on quarter-inch jacks, and a special four-way mini-jack cable is included to connect it to your iOS device. A second stereo mini-jack socket provides a phones output. There's no USB option for computer connection, though.

Power comes from a 9V battery, and to get you started you can load up the free version of Amplitube that's available from the Apple App Store. On-board active circuitry matches the guitar impedance to the input stage, and also provides plenty of low-noise gain, leaving adequate headroom. The footswitch bypasses Amplitube (or other compatible iOS app) for live performance and also mutes the headphones output.

The Stomp feels very solid, in a familiar stomp-box way, and delivers clean audio quality, which I guess is all it really needs to do. It worked fine with Amplitube Free and Amplitube Fender Free, as you'd expect, but it also functioned immediately with AmpKit, which is not an IK product. I sometimes wanted the headphone output to be a little louder, but I know the health and safety people have been putting pressure on manufacturers to moderate headphone output levels, so that's something you have to live with.

Given that the Stomp is so affordable and compact, it occurs to me that it would also make an excellent backup for the gigging guitarist, in that if your amp blew up during a gig, you could plug the iRig Stomp into the PA and finish off the evening confident that you'd still have access to decent guitar sounds and effects.

The iRig Stomp pairs beautifully with its software counterpart and could be a godsend for the mobile guitarist.