These compact speakers approach the performance of HK's higher-end systems, but at a surprisingly modest price point.

The new HK Linear 5 series of loudspeakers aims to offer high SPL capability in a format that is still practical for musicians who need to own and transport their own PA systems. Both birch ply and MDF are used in the cabinet construction, while Class-D electronics in the active models help keep the weight down and the efficiency up.

JHS, HK's UK distributors, were kind enough to loan us a pair of 112FA active tops and two Lsub 2000A active subs to test at local outdoor event West Fest, which coincided with the wettest and muddiest summer I've ever experienced! The area to be covered was around the size of a rugby field, although the visitors with more interest in the music than the bouncy castle were in the half of the field closest to the PA. Because the weather was so bad, we decided to keep things as simple as possible and, if necessary, make do with less SPL, so our initial setup comprised just the system provided.

Having run some tests with recorded music, it sounded well-balanced and reassuringly loud, but just in case the levels crept up, we also brought in a couple of HK Pro subs as reinforcements.

The 112FA cabinet is pretty flexible, as it can be used as a self-contained full-range speaker at more modest volumes (its frequency response is 64Hz-18kHz, ±3dB), or as a mid-range/high unit in conjunction with a subwoofer, if more level is needed. Although fairly compact, and manageable by one person, the 112FA provides 650W of Class-D power for the 12-inch driver and a further 350W for the HF driver. This translates to an impressive peak SPL of 134dB (in half space), which is a fair bit of level for the price!

Outwardly, the cabinet design is fairly conventional, with a 12-inch speaker driven by a 2.5-inch voice coil, backed up by a one-inch-throat horn fitted with a 1.75-inch driver. An asymmetrical horn flare provides a 90-degree horizontal coverage up close (narrowing to 55 degrees at a distance), and vertical coverage is around 60 degrees.

The cabinet shape is trapezoid, tapering towards the rear and measuring 37 x 66.8 x 36.5cm overall. Rubbery feet are fitted to aid stability and stacking, and the cabinet is also fitted with metric-thread flying points. The finish is a tough, textured black paint, metal handles are recessed into the cabinet sides, and the pole mount is HK's Duo Tilt design, offering downward pointing angles of three or seven degrees.

All the controls and connectors are on a recessed metal rear panel, and the first thing you notice is that there are two mixable inputs on XLR/jack 'combi' sockets, with a recessed switch allowing channel A to be set to mic or line level. In mic mode, the gain is boosted by 30dB. Channel B is line only. Each input has an XLR 'thru' connector, and a centre-detented input-gain control. 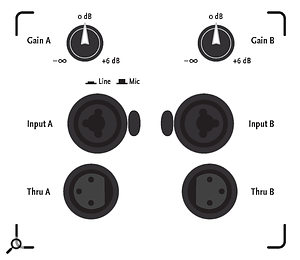 A mix output is available to feed a second powered speaker, so if you only need two inputs (and only one of those is a microphone), you could use the system without a separate mixer for basic announcements, or recorded music playback and so on. A toggle switch selects between two venue size settings — EQ presets marked 'High Power' or 'Small Venue', which configure the amplifier voicing to suit the location. The Small Venue setting seems to apply something of a smile curve to add warmth and sparkle, but we used the Large Venue (flat) setting for our tests.

Another toggle switch is for input gain, with a choice of 'L5 System' or '+4dBu'. Selecting L5 System and setting the channel gain knobs to their 12 o'clock positions matches the speaker's gain to that of other Linear-series components.

The power input is on a locking IEC socket, and the internal PSU is switched. An LED shows green when the unit is powered up and happy, and this turns to red to indicate either that the inbuilt limiter has stepped in to prevent clipping or, if permanently red, a fault condition. An automatic standby mode keeps the power consumption down to only around a quarter of a Watt when no signal is being passed.

The L Sub 2000A subwoofer uses a pair of 12-inch speakers in a sixth-order, double band-pass design. Essentially this means that the front and rear of the drivers each feed their own tuned, ported chambers, yielding a relatively high efficiency at the expense of some bass 'smearing' due to the resonant nature of such designs. In live sound, this is generally an acceptable trade-off, as it delivers a subjectively punchy bass at impressively high levels. Each of the drivers has a 2.5-inch voice coil, a sophisticated cooling system and a dual-spider suspension to keep the coil centred. The powerhouse behind these subs is a 1200W, Class-D amplifier. Peak SPLs of up to 133dB can be achieved, and, although the box isn't exactly compact, measuring 50.6 x 80.6 x 61cm, it still packs a lot of punch for its size. HK specify the -3dB point as 49Hz.

Construction is mainly of 15mm and 18mm birch ply, and there are two pairs of handles set into the cabinet sides. The review system came with large castors on the back of the unit, which also helped to keep the control panel away from trouble. Note that these are optional, as customers setting up a permanent installation don't want to pay for castors they don't need, but I'd really recommend them for mobile use — at 46.2kg, this cabinet needs two people to lift it safely, so those large castors were very welcome!

One of the side panels is removable, giving access to the drivers. A metal grille running up the centre of the front panel covers the ports that carry the sound to the outside world, and there's a standard-thread pole-mount socket in the top. There are also machined recesses to aid stacking. My only small criticism here is that handles on either end of the box would have been useful for carrying the speaker if steps or other obstacles precluded the use of the castors. 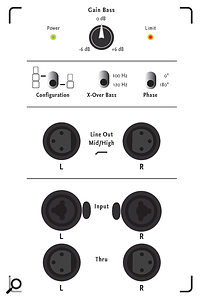 The rear-panel connections on the 112FA (top) and L Sub 2000A (bottom). Both have input gain controls and full-range thru outputs, while the sub additionally features high-pass-filtered outputs, and switches for selecting the polarity, crossover frequency and total number of subs being used.A pair of filtered output XLRs are available to feed the active tops, with a choice of filtering at either 100Hz or 120Hz, and there's a separate gain control for the sub level that goes up to +4dB. The balanced left and right 'combi' inputs are summed to mono for sub purposes, but the mid-range/high signals are passed through in stereo, so it is possible to use just one sub while still working in stereo with the tops. A pair of 'thru' connectors is also provided, to carry the full-bandwidth left/right input signals to another device.

There's also a phase switch, which is useful if you happen to be using non-HK tops that are wired in the opposite polarity to the sub, but this should be left set to zero degrees for use with other Linear 5 boxes. A further Configuration switch sets the system for use with one or two subs per side. As expected, the amplifiers are well protected from under-voltage, short-circuit and over-current conditions, as well as excess heat. A subsonic fourth-order filter keeps ultra-low frequencies out of the system, and a limiter prevents clipping.

We've used a variety of similarly powered systems in previous years at West Fest, and overall this one stacked up surprisingly well, especially as it isn't nearly the most costly in the HK range. Myself and the other two guys sharing the sound duties were particularly impressed by the volume and clarity of the tops: there's lots of definition, but they don't sound at all edgy. Even those cowering from the rain in the beer tent heard a good mix at a decent level. In particular, vocals came over very strongly, with great coverage throughout the audience area. HK's high-end Contour boxes still have the edge, but the difference isn't nearly as great as the price differential might suggest.

We ended up mounting the subwoofers on platforms above ground level to keep them away from the mud, but we did some tests first to ensure that the sound wasn't compromised too seriously. Mounting subs above ground level invariably causes some dips in the bass response, due to phase cancellation, but we felt that was better than trying to explain why the loan system was covered in mud!

The tilting options for the 112FAs are good for smaller indoor venues (my own Premium Pro system has these too), but on occasions I've also wanted a 'flat' position — particularly for outdoor events. In this instance, though, since the subs were elevated, we stood the tops directly on them, so that wasn't an issue.

The subs put in a strong performance, working well on a subjective level and dishing out plenty of punch — maybe not quite as much 'slam' factor as the Contours, but they certainly sounded impressive for the price. We did experience a few odd bumps and dips in the bass response at certain locations, but that was almost certainly due to interference caused by reflections from a high earth bank opposite the stage; we've had similar issues with other systems in previous years.

If the subs are used without the tops, there is some unwanted internal noise from the boxes, due to minor rattles or vibration in some of the components (and possibly the castors), but this was completely masked in normal use with the tops powered up.

After the initial tests, we also switched in the HK Pro powered subs just to share some of the load, but in hindsight I think we could have managed perfectly well without them!

This is a very impressive system for the price, and you can just about get two subs and two tops in a typical estate car with the rear seats down. If the system can handle an outdoor event as well as it did in this instance, typical indoor club gigs should be a walkover. I was particularly impressed by the sheer level of clean vocals that could be coaxed out of the tops, so for smaller gigs you could easily get away with just a pair of 112FA tops. Where you do need more low end, a single sub (or a pair of the smaller £989 2 x10 L Sub 1200As) should cover most small-gig eventualities. I know there's a temptation to buy cheaper plastic-box PAs when times are tight, but this system delivers real 'grown up' performance and may well be worth the extra cost.

The larger HK Lucas and Actor systems, or the HH Tessen range, would be practical alternatives if you are looking for a wooden-box speaker package in this price range.

The Linear 5 PA performs very well for the price, and is perfectly pitched towards bands playing medium-sized venues and needing their own portable system.