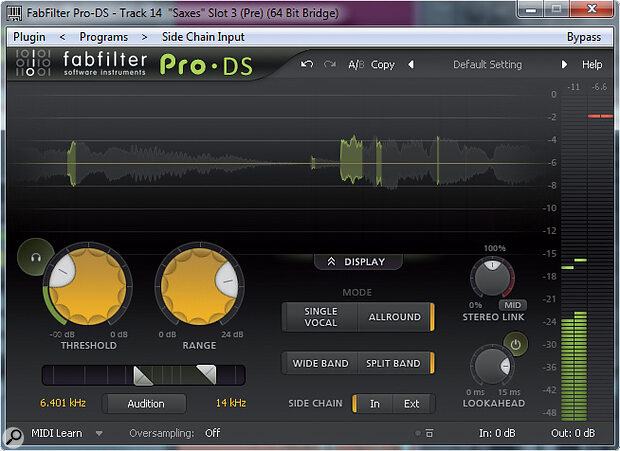 Pro DS doesn't need the hidden 'expert' controls of other plug-ins in the Fabfilter range and lets you access everything via this simple, single-page interface.

Behind Fabfilter's elegant interface lurks an advanced algorithm that is claimed to offer the most natural de-essing yet.

Ask any mastering engineer which faults they encounter over and over again in amateur or project-studio mixes, and excessive vocal sibilance is likely to be near the top of the list. In a less-than-ideal space, it's always tempting to try to work microphones very close, in order to minimise the amount of room ambience that is picked up. However, this benefit often comes at the cost of exaggerated 'ess' and 'tee' sounds, not to mention the risk of popping. Pop shields can help control the latter, but do nothing for sibilance: personally, I'm convinced that they make it worse, as does the tendency for many modern mic manufacturers to build a superficially flattering high-frequency lift into their products.

Like any audio problem, sibilance is best dealt with at the recording stage, but that isn't always possible — for instance, with a live show that has been tracked from the front-of-house desk. And no matter how much care one takes with mic placement and choice, there are some singers who just have incredibly sibilant voices.

In other words, sooner or later most of us will probably be confronted with a mixing session that contains vocal tracks whose sibilants are too prominent. And although this isn't ideal, it's far better to sort it out at the mix than to expect your mastering engineer to somehow control them when he or she has only a stereo bounce to work with.

There are two basic approaches to de-essing at the mix stage. Many mix engineers will tell you that the best way to achieve natural-sounding results is to use automation in your DAW, either to duck the level or adjust the EQ of the vocal track when a sibilant is encountered, or to control how much of it is sent to your reverb and delay at the same points. The other approach is to use a plug-in or hardware processor to try to do the same thing automatically.

Most old-school de-essers are, at root, frequency-selective compressors, and in fact you can use any compressor with a side-chain filter as a simple de-esser: just equalise the side-chain to focus on the 5kHz area or thereabouts, and the compressor will then duck the level whenever a sibilant comes along. This works up to a point, but it's alarmingly easy to make your singer sound as though he or she has a lisp, and the natural dynamics of a vocal part often mean that loud passages are over-processed and quiet ones untouched.

Thankfully, in recent years there have appeared a number of more advanced digital de-essers in plug-in form, notably Eiosis's E2 De-Esser and the Sonnox SupprEsser. One of the main improvements claimed by these is a more intelligent ability to detect and respond to sibilants, in a way that's independent of input level. The same claim is central to the product under review here, Fabfilter's Pro DS. It's available as a plug-in for Mac OS and Windows in all the usual formats, including AAX and, like the other plug-ins in Fabfilter's range (which, incidentally, I rate very highly), is authorised simply by entering a serial number.

Anyone who's used Fabfilter's other plug-ins will be immediately at home with the Pro DS interface, which shares many of their innovative and intuitive design features. Along the top is a waveform display which scrolls from left to right; where Pro DS detects sibilants, these are picked out in green. Unlike the other plug-ins in the range, however, Pro DS has no hidden 'expert' or advanced controls: what you see on the main page is exactly what you get. Buttons allow you to select Wide or Split-band processing, internal or external side-chain, and you can choose between Single Vocal and Allround algorithms. Two small dials at the right set the degree of stereo linking and the amount of lookahead time the algorithms can use, but the main business is done using the two large yellow knobs on the left.

De-essing with Pro DS is simplicity itself. You simply turn the leftmost Threshold knob until sections of waveform begin to be highlighted in green, then adjust the Range knob until the required degree of de-essing is achieved. Beneath these two controls is a deceptively simple side-chain filter, and a lovely touch is that the bar along which you drag the filter cutoff controls incorporates a real-time spectral analyser, which glows more or less brightly depending on how much energy there is in a particular part of the spectrum. In conjunction with the Audition button, which lets you hear the filtered side-chain signal, this makes it very easy to tune the processing to your source.

I first tested Pro DS on a slightly problematic location recording I'd made, where two male singers were very sibilant and had to be close-miked because they were also playing instruments. I had already set up a fairly sophisticated de-essing arrangement using Eiosis's E2 De-Esser and quite a bit of automation. When I tried to match this with Pro DS, I couldn't get audibly better results, but it was much easier to set up, and I'm sure that if I had spent more time on automation I would have got very close. Both plug-ins left traditional de-essers in the dust, and both tracked the sibilants very well.

The comparison brought home to me the extent to which graphical interface design is a real highlight of all the Fabfilter plug-ins: the visual feedback you get from Pro DS is far better than any competing product I know of, and makes it an absolute pleasure to use (I never thought I'd say that about a de-esser). And in less challenging situations, where all you need to do is trim sibilants by a couple of decibels, it's one of those plug-ins you can treat as 'set and forget', doing its job as invisibly as anything I've encountered. When I tried it on a female vocal that needed just a little taming, it gave the most natural results of any plug-in I had available.

Oddly enough, though, Pro DS impressed me most of all when I tried it out in a completely different context. I had made some scratch recordings of a jazz session, and for various reasons, there was lots of drum spill onto the sax mics. It occurred to me that if I placed an instance of Pro DS on the sax track and side-chained it from the drum overhead, I could perhaps get it to track and control the annoying hi-hat and ride spill that was blighting the upper-mid frequencies. Somewhat to my surprise, this worked very well indeed, and in the context of what was a pretty rough recording, I was able to duck the offending brassware by as much as 8 to 10 dB without completely ruining the sax sound — there was an audible loss of 'air' around the sax, but no pumping or other problematic artifacts, and it was a price well worth paying for the improvement it made to the drum sound.

As an avowed fan of Fabfilter's other plug-ins, I was expecting to be impressed by Pro DS, and I am impressed. Although I was initially flummoxed by the lack of 'advanced' parameters such as time constants, I quickly realised that the Pro DS algorithm makes these unnecessary. Ultimately, I think that in a project where you can afford to devote hours to automating every nuance of a vocal track, the manual approach still can't be beaten — but all too often there simply isn't the time. When you need to hand the reins over to a plug-in, Pro DS is up there with the best, and has by far the best user interface of any I've tried (though I haven't used the Sonnox SupprEsser, which also has many fans). And, as I found with my jazz project, it has great potential for use on other sources with a bit of lateral thinking. Sooner or later we're all going to need a de-esser, and in plug-in form, this is as good as it currently gets.

There are many plug-in de-essers on the market, and most multi-band dynamics tools can be used in this way too, but if you're looking for a more modern design that can intelligently detect sibilants independently of level, the obvious rivals are Eiosis's E2 De-Esser and the Sonnox SupprEsser.

Fabfilter's reputation for innovative and intuitive user-interface design will be boosted further by this excellent de-esser.