Another pedal featuring Boss's Multi-dimensional Processing technology, and the 100th pedal to be added to their range, the TE2 Tera Echo is an interesting product that sits somewhere between delay and reverb, but with a smattering of filtering thrown into the mix. It has both mono and stereo input and output options, and the Multi-dimensional Processing is claimed to analyse the incoming signal in multiple ways before using the result to modify various aspects of the final sound. In other words, Boss aren't giving much away!

Designed primarily for guitar, the effect can in fact be used on any instrument and, in addition to its novel delay effect, it can also 'freeze' a sound when you press and hold the pedal. This isn't as seamless as the Roland VG99's Freeze function, as you can still hear hints of a short loop, but it's still a useful feature. My guess is that input signal is being looped before being fed into the delay generator, which helps make the loop sound less obvious. At medium delay-time settings, the loop is a little under a second long.

The core of the effect is some kind of multitap delay, rather like the early-reflections generator of a reverb unit, but with the tap spacing becoming progressively longer, so the delay rate slows down. Feedback quickly builds this into a pseudo-reverb kind of tail, but with some individual repeats still being audible. The envelope-responsive filtering appears to 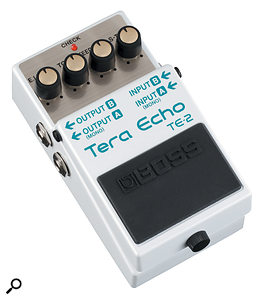 come before the delays in the signal path, leaving you with a pulsing rhythmic filter effect. The Tone control sets the way this filtering works: rather than acting as a simple bass/treble control, it adjusts the filter's resonant frequency. The Feedback control does as you'd expect, adding length to the delay pattern and eventually resulting in runaway feedback if you push it too high. That leaves Delay Time, which increases or decreases the spacing between the delay taps and the expected wet/dry mix control.

If you pick a single guitar note and then listen to the delays, the filtering can sometimes seem a bit extreme, but when applied to melody lines or arpeggios it works much better, creating a kind of ambient soundscape that sits behind the dry sound, without choking it.

You don't have to worry about matching the delay tempo to the song, as the multitap pattern is so complex that it doesn't really matter! With the shortest delay-time settings, adding a bit of feedback creates a wonderfully trashy spring-reverb type of effect, in which longer delays produce textural washes. Holding down the pedal loops whatever is at the input, leaving you free to play over it using the clean part of the sound. In this way, it's possible to freeze whole chords to use them as a textural pad.

On the whole, then, I rather liked this pedal, although I would have preferred a means of reducing the filter effect for those occasions that needed a cleaner, more conventional delay tonality. Even so it should appeal to purveyors of ambient music or those into creating Pink Floyd-like soundscapes, so if your local music store has one in stock why not give it a try? Paul White