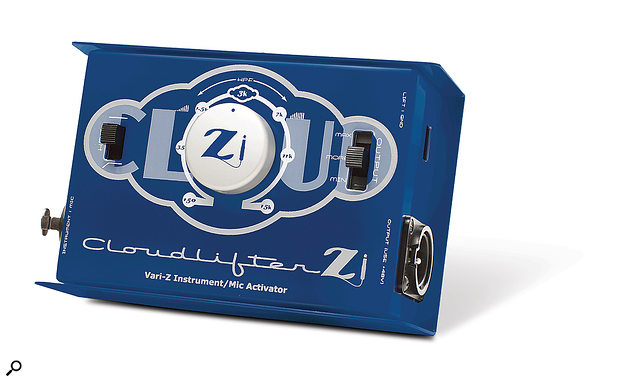 We’ve reviewed a number of ‘blue box’ Cloudlifter ‘mic activators’ before, and we’ve always been impressed by how they manage to add so much clean gain when placed after dynamic mics, particularly ribbon models. Power for these active boxes comes from the phantom power source of the mic input to which the Cloudlifter is connected, and on the simplest models there are no controls at all — you just plug in and it works. Note that no phantom power is passed through to the input, so Cloudlifters can only be used with dynamic microphones or mics that have their own power source. A later version of the Cloudlifter added variable impedance, and the same circuity is apparently used in the Cloudlifter Zi but with the addition of a high-impedance, transformer-coupled instrument input, which is well-suited to passive guitar and bass pickups but also electronic keyboards.

When used with mics, the Cloudlifter Zi provides up to +25dB of clean gain to low-impedance sources via its XLR input, or up to +15dB for high-impedance sources via the quarter-inch jack section of its Combi input. The instrument input goes via a MuMetal-screened CineMag instrument transformer, which is then fed into the active circuity. The impedance adjustment takes place after the transformer’s secondary winding and affects both the mic and instrument inputs, which is why the values printed around the dial are in kΩ rather than the MΩ guitar players might expect to see. The impedance range is 150Ω to 15kΩ — but, of course, the impedance is much higher on the input side of the transformer.

As with previous Cloudlifters, the steel casework looks to be extremely rugged and there’s a shallow bracket welded to the bottom, through which a securing strap can be passed if required. Rubber feet are fitted for desktop use. The Combi XLR/jack input is on the left (the opposite of what you might expect for a guitar pedal), and the output XLR (which must be connected using a balanced cable to an input with phantom power) is on the right. The HPF and Output gain switches are placed either side of the impedance adjustment knob, and there’s also a recessed ground-lift slide switch on the right-hand side of the box.

The variable input impedance control works together with a continuously variable high-pass filter to allow it also to function as a creative tone control on either the mic or instrument inputs. When the HPF switch is engaged, the frequency cutoff changes with impedance setting covering a 6dB-per-octave, 70Hz-to-4kHz range. As the impedance is lowered the HPF frequency increases. If you don’t need this, then just set the LPF switch to off.

A three-position slide switch labelled Low, More and Max allows the user to add less gain where the input doesn’t need much boosting, but in most cases it can be left set to Max. We’re told that the transformer loses a little level, which is then made up by the active circuitry — this is why the maximum instrument gain is around 15dB, as opposed to around 25dB for microphones.

As a guitar DI box, I personally preferred the sound at the higher end of the impedance range, which delivers a clean and natural sound — at low settings the guitar feel changes due to the loading on the pickups — but having the ability to experiment is certainly worthwhile. The filter helps redress the usual loss of treble at lower impedance settings.

If you only need to DI guitar, then a good buffer pedal will probably work just as well and cost rather less, but if you are also in a position to make use of the Cloudlifter’s ‘clean gain’ capabilities when used with dynamic mics, the instrument input makes a very welcome addition.