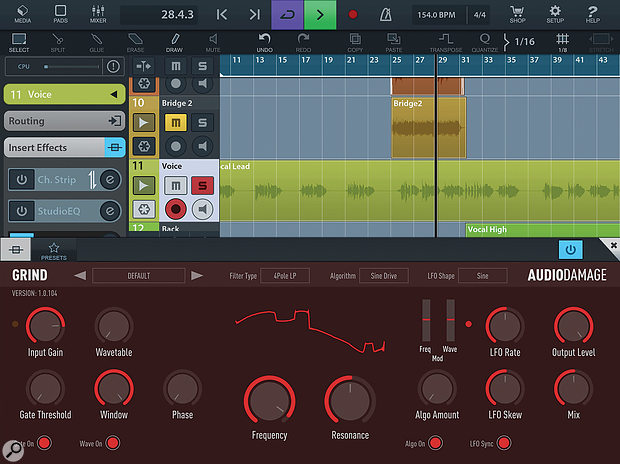 Grind Distortion: all flavours of fuzz in a single iOS app.

Regular readers may well be familiar with developer Audio Damage through their range of desktop plug-ins. These are both cool and very competitively priced. However, within the last few months, Audio Damage have started to take a pretty serious interest in iOS, porting a number of their desktop plug-ins to the mobile platform. This includes Grind Distortion, their popular distortion/overdrive/tear-it-up effect. While there are a few layout differences, in all other respects, the iOS version is identical in specification and operation to the desktop version.

Although the iOS app runs stand-alone and via IAA, it is really designed for use in an AU host. It is a universal app, requires iOS 9.3 or later and, at just 7MB, will fit on even the most over-stuffed of iOS hardware. As the name suggests, it does distortion, but this processor is perhaps not your typical ‘stomp box in an app’ overdrive effect.

The full control set is contained within a single screen. Once your audio has exceeded the level set by the Noise Gate on input (you can bypass this but it does mean you can choose to only process the louder parts of your audio if you wish), there are two different signal paths that can add an element of distortion to your audio; the Wavetable Shaper and the Algorithmic Shaper. These can be toggled on/off independently (the Wave On and Algo On buttons) so they can, if you want things to get particularly crunchy, both be used at the same time.

The Wavetable Shaper offers you a choice of 15 different waveforms that can be used to shape your audio and you can blend between consecutive waveforms in the table. The Algorithmic Shaper is perhaps a little more obvious on the surface in that you pick an algorithm — overdrive, soft sat, distort, fuzzplus, etc. — from a number that are available. After the two stages of distortion comes the filter. This is also quite flexible and the drop-down menu offers a number of basic, and not so basic, filter types with frequency and resonance controls. The final major element of the feature set is the LFO with a range of different LFO waveforms, plenty of adjustment controls and options to target either the filter frequency setting or the wavetable index.

Technically, the app worked very well (I did most of my testing via AU with Cubasis as my host app) but what was most impressive was the huge range of distortion/overdrive treatments that you could coax out of the app. For example, used as an insert effect on a lead vocal, the app could be used to just add the most gentle of saturation to the sound and gave the vocal a very nice edge. However, when you want to go all Nine Inch Nails, Grind Distortion can get you there, and with some ease — the plug-in really does span subtle to decimation without breaking stride.

There are lots of options for adding a touch of overdrive to a sound. Grind Distortion has that covered but, as it can also do very ‘full on’, I would guess it is going to appeal most to those that like to really trash their sounds. If that’s you, then at this price, Grind Distortion is well worth a punt.