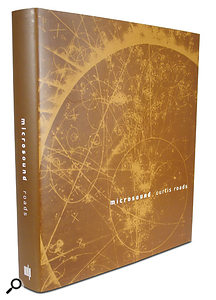 Many people today seem to be obsessed with recreating 'classic' sounds, whether it's Minimoogs, TB303s or even traditional orchestral instruments. So it's refreshing to find that there are still people out there intent on pushing the boundaries of synthesis further and creating new sounds. Curtis Roads has done more than most: a co-founder of the International Computer Music Association (ICMA), he was also an editor of the Computer Music Journal for 23 years. He spent most of the '80s researching computer music at MIT, and now teaches in the Centre for Research in Electronic Art Technology at the University of California. He has written many books on the subject of computer music, including the excellent Computer Music Tutorial, which I would highly recommend to anyone, regardless of their level of familiarity with the subject. He also composes, and recently performed at the 2003 All Tomorrow's Parties festival, curated by Autechre. It is no surprise, then, that his book on granular synthesis, Microsound, is a fairly comprehensive guide to the subject.

Roads' involvement with granular synthesis began in 1972, and his research in the field has resulted in him eventually developing his own software. Granular synthesis deals with sound at a 'quantum' level: the sonic atom being the individual sample (any one of the 44100 taken in a second at the standard sampling rate). To be audible as anything other than a click, samples need to be grouped together to form grains of sound. These grains are typically anywhere between three and one hundred milliseconds in length. Granular synthesis is concerned with the organisation and processing of both samples and grains to create sounds that are often far beyond the range of more traditional methods of synthesis.

The technology and software required to manipulate sound at this level is now commonly available. Popular programs like Reaktor and Max/MSP offer in-depth granular facilities, and Roads' own programs, Pulsar Generator and Cloud Generator, are, as you might expect, specifically designed for this sort of application. Although this technology has made it possible, granular synthesis remains a complex process. Microsound is perhaps the best theoretical and practical guide to date, its 409 pages concisely and fluently written throughout. The first chapters outline basic time scales in musical structure and the history and theory of microsound. Chapters three to six deal with the theory and practice of granular synthesis, examining everything from the organisation and processing of grains to the implementation of micro-scale transformations. The later chapters explore the implications and aesthetics of composing with microsound. The book concludes with a brief chapter about the future of granular synthesis. If there is any fault with this book, it is that it may be rather academic in tone for some readers — it is not a 'how to' book in five easy steps! However, if you are seriously interested in exploring granular synthesis, and understanding the principles behind it, then this book is ideal.