I reviewed Creative's Audigy Platinum Ex in SOS November 2001, and found it to be a huge improvement over the popular but ageing Soundblaster Live! card, providing new 24-bit converters, low-latency ASIO drivers, and for the first time ever on a budget soundcard, Firewire ports. After a respectable gap of some 18 months the Audigy 2 Platinum Ex arrived in Spring 2003 with loads of new features such as ASIO 2.0 24-bit/96kHz support, DVD-Audio playback at up to 24-bit/192kHz stereo, a much better 106dB signal/noise ratio, and improved DSP effects.

Now, just six months later in Autumn 2003 comes the Audigy Platinum 2 ZS Platinum Pro under review here. So what have Creative Labs managed to achieve in such a short time that warrants a new product launch? Well, the signal/noise ratio has increased by 2dB to 108dB, and there's a new THX Console to help you set up your surround speakers. Also new is support for 7.1 audio (via the three analogue 3.5mm outputs) "for the most immersive gaming and movie experience ever", plus native support for the discrete DTS-ES (Extended Surround) format with the sixth Rear Centre channel encoded in the soundtrack. The EAX 4.0 Advanced HD effects offer a new enhancement to allow multiple simultaneous EAX environments in games, so you can hear the 'baddies' in their acoustic 'space' while still in yours, there's a new multi-channel seven-band graphic EQ, and the Media Source 2 software has been improved to rip and play yet more formats of audio.

Since the Audigy 2 ZS is so similar to its predecessor I'll concentrate on the differences only: if you want to find out about its inherited features I suggest you refer to my original review of the Audigy 2 in SOS April 2003. You'll still need two backplate positions to house the card and optional joystick/MIDI bracket, and the new card like the old requires a Power Converter cable to be connected to your computer's PSU to provide sufficient juice — apparently the Audigy range requires more than the PCI buss can supply. The External I/O Hub is definitely the same as before, since although the help files show a 'Audigy 2 ZS' logo across its front panel, I was sent an Audigy 2 module with the ZS review card. However, one hardware item is definitely new: the supplied RM1500 remote control is a slimline unit powered by a CR2025 button cell, and is a lot more stylish than its predecessor.

On the software side, you still get the option to install just the 36MB of driver files, but the full install including all supplied utilities and applications is 180MB — you certainly get plenty for your money with a Creative card.

Creative provide reviewers with copious notes on how to set up Rightmark's Audio Analyser to get the best results, specifying that Line Input 3 must be used, and explaining that this has been specifically isolated to avoid ground loop problems that will "artificially distort the RMAA results". Thus, using Line Inputs 1 and 2 will give poor test results, but in normal usage their performance should be the same as Line Input 3. However, although you'd never normally want to connect your inputs to your outputs, many musicians will connect them both to an external mixer, so I'm not entirely convinced by this argument. Moreover, during my auditioning I could just hear a small amount of background hum and buzz from the Audigy 2 ZS through my speakers even with only Line Out 1 connected, which is indicative of a ground loop problem. 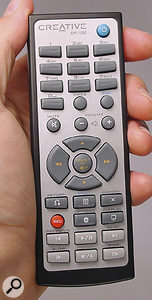 The supplied RM1500 remote control.The fact that Creative need to supply such detailed instructions on how to achieve best audio results by disabling the CMSS 3D, EAX, Karaoke, Equalizer, THX Setup and Speaker Calibration, plus muting and pulling the faders down to zero for all but one input in the mixer, and setting its fader to 58 percent (0dB) rather confirms what I've said all along about the Soundblaster range — that all the extras sometimes get in the way of achieving the cleanest playback and recordings. However, to their credit, Creative have made adjusting the input and output gain controls on their Surround Mixer much easier than ever before: clicking on them now provides a readout of the current value as both a percentage and in dB, which makes setting up far easier.

The Audigy 2 ZS Platinum Pro certainly passed the RMAA 24-bit/96kHz tests with flying colours, confirming the 2dB improvement in dynamic range, a slight improvement in stereo crosstalk, and a more extended high-frequency response, being 0.1dB down at 45kHz rather than the 1.0dB I measured on the Audigy 2, showing that a different filter characteristic had been used. As on the original, however, there were still characteristic ripples at the high end at all other sample rates, where ASRC (Asynchronous Sample Rate Conversion) had been employed, although once again the dynamic range was slightly better.

I was interested in ascertaining whether or not I could hear the improvements subjectively, and spent a long time auditioning the ZS against my own Echo Mia with a wide range of music — the Audigy 2 ZS CS4382 D-A converters theoretically have a better spec than the Mia's AK4528, though this is not the only factor in play. Despite the ground loop problem I mentioned earlier, which limited its ultimate dynamic range, the ZS provided an extremely good overall sound with precise imaging, and proved to be very close to the Mia, with only a subtle thinning during 44.1kHz playback that might well be due to the -0.2dB scoop at 3kHz that you can see in the graph. Moreover, the ASIO 16-bit/48kHz and 24-bit/96kHz drivers still performed as well as with the Audigy 2, managing latencies all the way down to 2ms on my PC.

The ZS is certainly the best-sounding Soundblaster soundcard to date, and anyone considering buying an Audigy should make sure that they get this model. While the graphic equaliser is best kept 'out of circuit' for the cleanest sound, there's no denying its usefulness to those with multimedia speakers that need a little help to sound balanced, and for those with a surround setup, the new THX Console and support for 7.1 and DTE-ES formats are well worth having, as is the small increase in dynamic range. 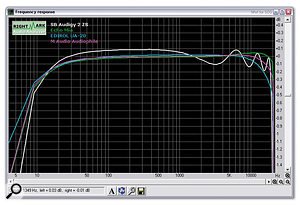 While the Audigy 2 ZS provides an excellent frequency response in 24-bit/96kHz mode by bypassing the fixed 48kHz 'engine', running at 24-bit/44.1kHz demonstrates the slight top-end ripple caused by the asynchronous sample-rate conversion.However, nothing has fundamentally changed with the Audigy design, and for musicians this has caused no end of confusion with its fixed 48kHz engine and 24-bit/96kHz bypass function. Yes, if you want to work at 24-bit/96kHz you'll get low-latency ASIO support with six inputs and eight outputs, and with very good sound quality, but in this mode the DSP effects are all unavailable. They return in 16-bit/48kHz ASIO mode in the form of four FX Slots, along with various other I/O options, but then you're going through the notorious ASRC engine, which resamples everything on the way in and on the way out, preventing bit-for-bit recording. If, like a sizeable proportion of musicians, you want to work at 24-bit/44.1kHz or even 16-bit/44.1kHz, you don't get ASIO support, and existing 44.1kHz files will either generate error messages or play back at the wrong pitch and tempo, while multitrack 44.1kHz demo songs will emerge out of sync.

Sonar users are slightly better off in that they get low latency support via the MME-WDM drivers at any sample rate, but then they lose the flexibility of the FX Slots provided by the ASIO drivers. Moreover, there are still no GSIF drivers for the extremely popular Gigastudio. This is perhaps understandable given the Audigy's integral Soundfont sampler, but when most of the budget soundcards for musicians do now provide GSIF support, it's yet another limitation.

Overall, the Audigy is probably the most comprehensive soundcard you can buy for a budget surround system, as far as I know the only one you can currently use for DVD-Audio playback, and its DSP environments and Direct Sound streaming functions make it wonderful for games. Its twin Firewire ports can also be extremely useful for those PCs don't have them. However, despite the huge leap forward provided by the ASIO drivers of the Audigy 2, many musicians have found these cards to be a source of confusion and frustration, and despite the new and improved sound quality of this latest ZS version, I see nothing that changes this situation.

The Audigy 2 ZS Platinum Pro provides incremental improvements over its recent predecessor, including better sound quality, but fails to remove any of its fundamental limitations for musicians.

Your Questions Answered
2 days 7 hours ago.