Diago's Little Smasher is a solid-state 5W guitar-amp head that's little larger than a typical effects pedal. It runs from an included power adaptor and is designed to accommodate speakers with an impedance of 4-16 Ω. There's a basic set of controls to provide gain and volume, plus bass and treble EQ, the last being active and offering up to 15dB of boost and 30dB of cut. All this is packaged in a tough steel case, adorned with vintage-styled knobs. All the connectors are at the back of the case, along with a switch to kill the speaker output. The guitar input has a 1MΩ impedance, and the power adaptor is generously rated at 9W. 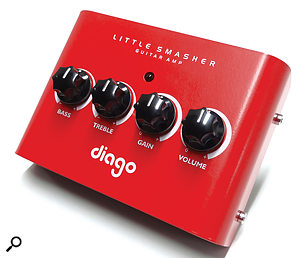 There's enough gain to create blues or rock-style overdrive effects, and at low drive levels you get a nice clean sound. As for reasons to buy one, you could add a Little Smasher to your pedalboard so that if your main amp dies at a gig far from home, you can switch to the Little Smasher to get you through the night. In the small studio, where you don't need a lot of amplifier power, the Little Smasher might be just what you need for recording. Though every amp has its own tonal character, the speaker to which you connect it also has a huge influence on the sound, so please keep that in mind when reading my comments on how the amp performs.

As soon as I plugged in this little amp (I used an eight-inch speaker in a combo) I picked up on one potential problem that affects many devices of this kind: the power adaptor does not carry a mains ground through to the unit, so unless you're connecting via some other device that does have a mains ground, excessive hum and buzz due to the lack of a ground can become a very real problem. In my case, that was evident both with single-coil-pickup guitars and those with humbuckers. I confirmed my diagnosis by rigging a mains ground wire and connecting it to the cold side of the guitar jack and voilà: no more excessive hum.

That issue aside, the circuit noise is comparable with what you'd expect from a typical solid-state guitar amp and the tonality, although perhaps a little lacking in character, is very usable. In the studio or on stage additional pedals and plug-ins can always be used to provide greater tonal variety and ear candy.

The feel of the amp when played through a speaker is superior to that of most DI approaches that I've tried, and the overdrive works rather better than I'd expected, even for those mildly-distorted blues tones. The amp is also louder than you might expect from a 5W solid-state device.

All in all, then, the Little Smasher may not be a 'boutique' amp, but it could certainly be a useful safety net for live performance, and could even provide a viable recording option for the studio — as long as you have a speaker cab to hook it up to and somewhere to ground it. Paul White